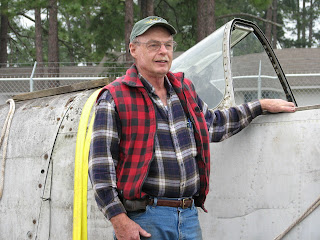 Tom Reilly has been in the warbird restoration business now for 41+ years  after a chance first flight in a P-51 Mustang in Kissimmee in 1971. He got his start when a friend wanted to sell some North American Yale Training aircraft in Canada.  He ended up buying 13 of them and restored five to flying condition.  The next big project was a derelict B-25 in Caldwell, NJ.  This aircraft was used as the camera ship for the film “Battle of Britain”, and then was abandoned for years.  He bought the aircraft from all of the lien holders at the airport and, against all odds and nay sayers, got it to flyable condition.  The B-25 started a love affair that Tom developed for bomber-type aircraft.

His big break came when he met Harry Doan from Daytona Beach, who graciously allowed Tom to fly his B-25 (after Tom restored it) to obtain his type rating.  His next big break came when he got a call from Bob Collings to do a pre-buy and purchase on a B-25 in Washington state.  This developed into a wonderful relationship where Tom restored not only the B-25, but the B-17 909 and the B-24 now named Witchcraft.

Tom’s specialty is taking on jobs that most other restorers say ‘can’t be done’.  This was surely the case with the B-24 and the most recent rebuild, the B-17 for Don Brooks named Liberty Belle.

In the 41+ years of being in the business, Tom has performed 34 major restorations which included ten B-25s, three B-17s, one B-24, one F4U Corsair, a P-40 and nine T-6 (SNJ) aircraft.  For 30+ years, Tom was located in the Orlando/Kissimmee area.  Kissimmee was a P-61 and P-70 (A-20 night fighter) training base during WWII.  In 2004, after Hurricane Charlie destroyed his restoration shop and museum, he moved to Douglas, GA, to work part-time for Don Brooks restoring his P-40E.  In August of 2009, the P-40E was airborne and, in October 2010, a complete restoration of Mr. Brooks’ incredibly stock condition PT-17 Stearman was completed.  It had sat idle in a hangar in Atlanta and had not flown for almost 40 years.  The plane was restored and has the same markings of the 1940s flight training base aircraft here in Douglas.

The latest project that Tom has found is the North American Aviation XP-82 Twin Mustang prototype.  This aircraft is only one of two that still exist in civilian hands and is being restored in Douglas.

Tom has provided many artifacts from his Flying Tigers Museum to the WWII Flight Training Museum in Douglas, GA.

Tom always remembers and thanks the many people that have contributed to his phenomenal success and international reputation as a restorationist.