Another month with good progress.

Fuselages/Center Section
At the end of August we accomplished the final mating of the two fuselages to the center section.  Also, now the two engine mounts have been permanently fitted.  Years of work and in just a few days it all showed. 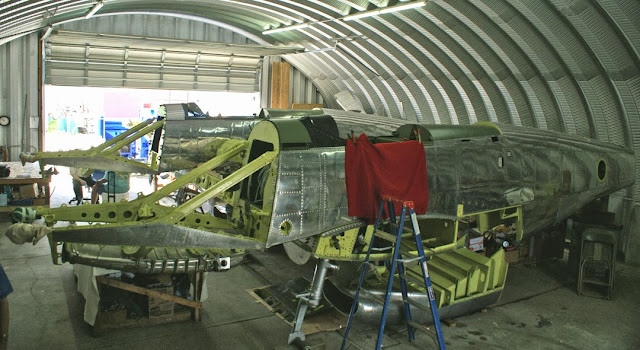 For scale comparison, notice the access door on the below NAA factory picture immediately after the blue insignia compared to the same access door showing on the rear fuselage of our restoration.

Ayman, Jeremy and Tim (the new guy) completed all of the nut plates (screw attachments that hold all the fairings on) and Dzus fasteners (same description) throughout both fuselages and mounts.  Bunches of them. 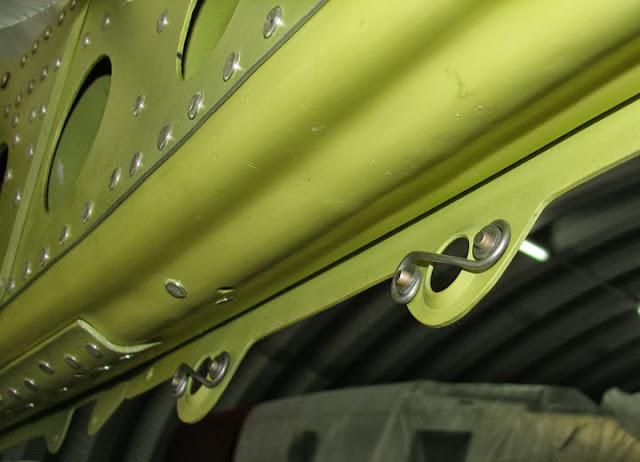 These are the spring sides of the Dzus fasteners on the two engine mounts. 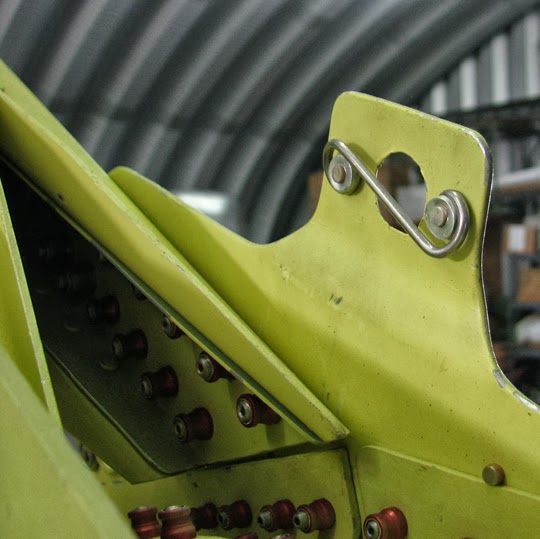 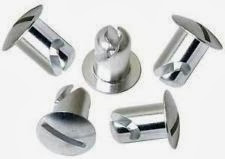 Nut Plate.  A  cast metal nut that is internally threaded that is riveted to a workpiece, with two holes for rivets. The nut plate below is WWII style. 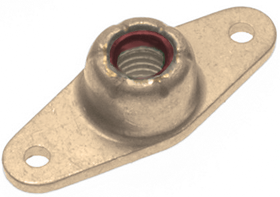 Cockpit Furnishings / Machine shop work
Vic (Erie) is nearing completion of our windshield and canopy bows. The other three machine shops that we are keeping busy, i.e., Cullen, Ron and John, are finishing up a multitude of other small parts--bomb, rocket rack forgings (all structural components that fit internally in each wing), one complicated emergency gear pulley casting, one elevator control bell crank for the right-hand cockpit, flap arms, aileron bell cranks, elevator, aileron and rudder hinge points, etc., etc.

We have spent over a bazillion dollars on outside machine work, but it all had to be done proficiently as it all has been.  Thank you all for an outstanding job.

We have had one of our volunteers contribute some more of our needed internal parts along with a rare gun sight.  Thank you, Gerald.

Coolant Tubes/Heat Exchangers
I have started the final fitting of all the aluminum coolant tubes that run from the engines back along the cockpit floor to the radiators mounted in the rear fuselages. There are four tubes in each fuselage, two 2” and two 1¼”. The smaller two carry the coolant from a special chamber in each radiator to the heat exchanger (oil cooler) and also to the intercooler section of the supercharger to cool the compressed air.  Four of these new tubes required special fittings to hold temperature bulbs, miscellaneous drains and other split off fittings that had to be welded on them.  Now I am a very good aluminum tig welder (tungsten inert gas), but these welds needed to be done better than “very good.” So I made a special trip to Florida where I had them professionally welded by an expert tig welder. Thank you to Rick at Blue Point in Titusville, FL, for an excellent job. 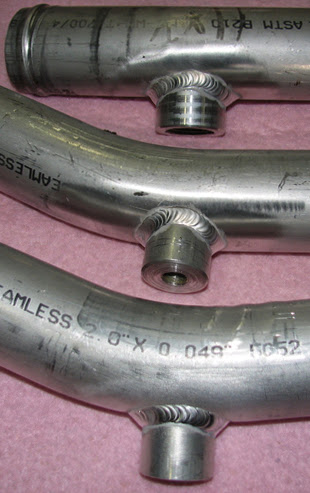 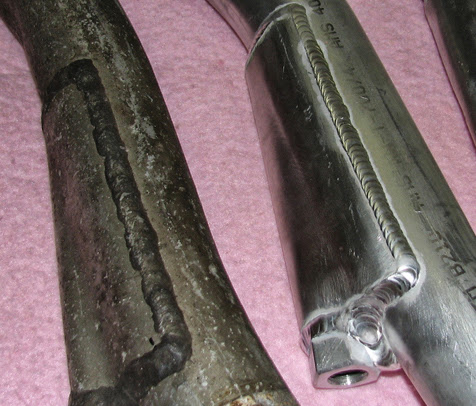 Also, a thank you goes to Pat Harker (his magnificent restoration of his F-82-E model is being done in Blaine, MN) for helping us with his mandrel bender to bend our coolant tubes. 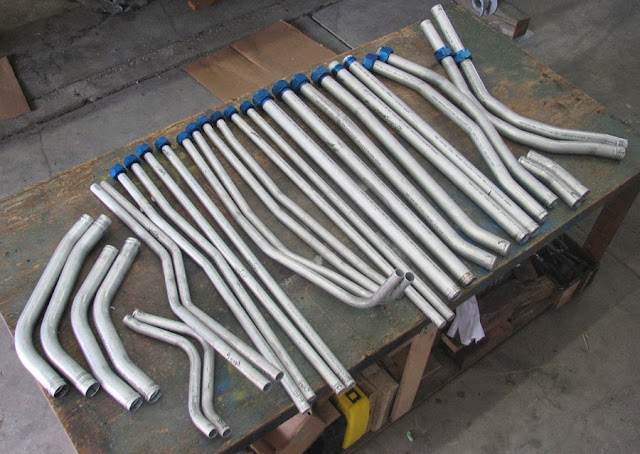 Wings
The aileron pulley brackets have now been completed.  I found in my Kissimmee stock the four N.O.S. (new old stock) 6” pulleys that fit into these brackets (two in each wing). 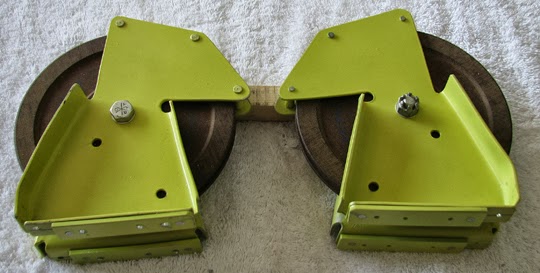 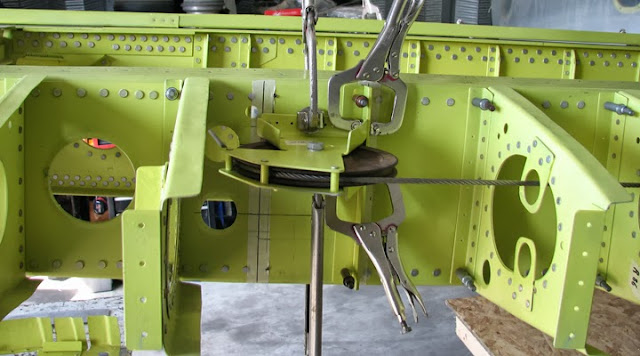 Fitting the aileron control pulley bracket in the right wing

Paul and Randall have been making good progress on the right wing.  The right wing is currently mounted to the center section attach angles and is held in place by a temporary fixture for preliminary set-up (see picture in last month’s news release).  All 32 of the hat channels for the fuel tank bays in the right wing are now completed, awaiting heat-treating.  By the end of September they will have started on the left wing set-up.  Almost all of the left wing parts, i.e., ribs, hat channels, spars and attach angles, were completed a few months ago along with the right wing so the left will go together substantially faster.

Flaps, Flap Wells
Ayman and Jeremy completed the center section trailing edge flap ribs and well closeout along with the two aft top machine gun bay doors. The flaps are three large panels that hydraulically extend aft and down behind the wing to slow the aircraft during landing. 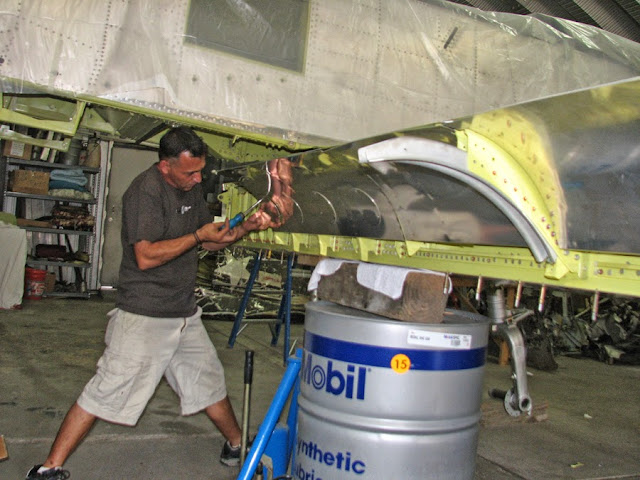 Ayman completing the riveting on the flap bay 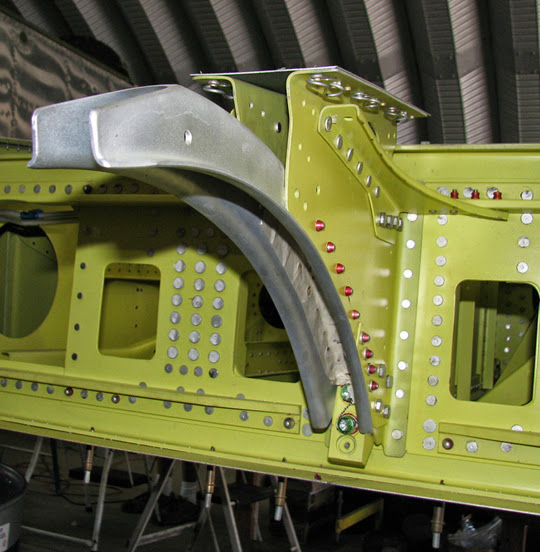 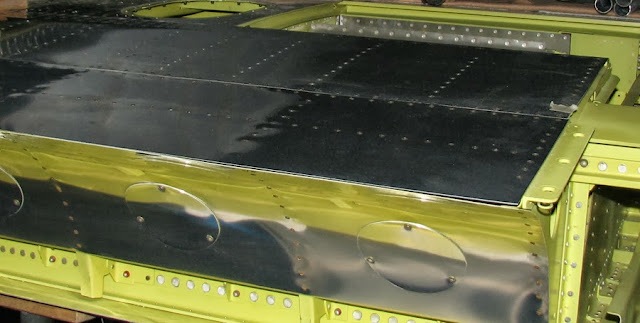 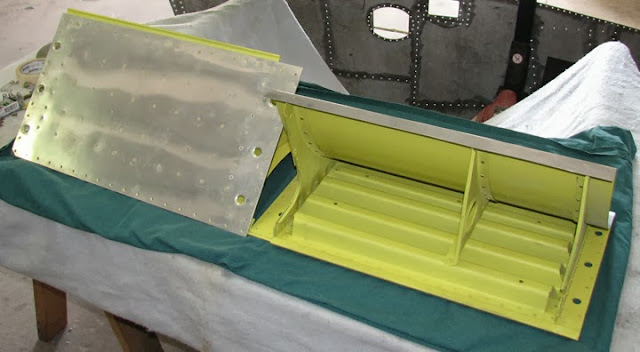 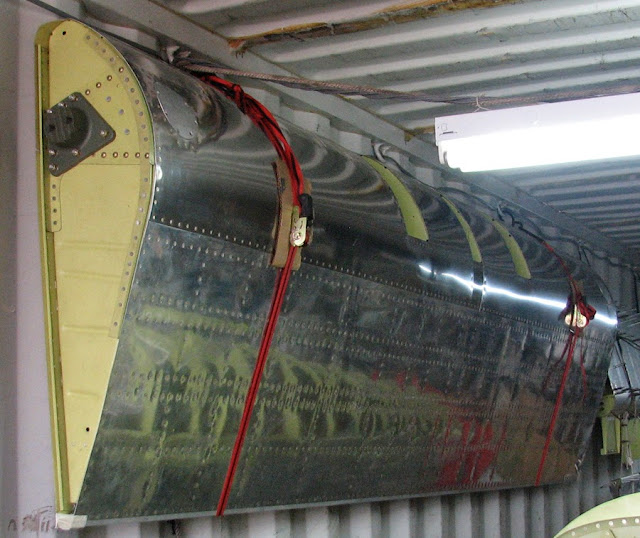 I have two machine shops currently completing the four flap control arms that get mounted to two cross-ship arms linking the inboard center section flap to the two left and right outboard flaps mounted on the wings.

We were able to use two out of the six Colorado flap arms as they proved to be airworthy. Because of the scrapper’s torch and/or years of corrosion, the remaining four could only be used patterns.

Moreno Aguiari (warbirdsnews.com) and Michael Zeeveld, of ZEEMO Digital Prototyping in the Atlanta area, are helping us with the computer set-up on difficult parts that need to be machined.  The part is recreated in a 3D computer generated model environment using Autodesk Inventor application.  The 3D model computer disk then can be sent to a C & C-equipped machine shop to produce the part(s). 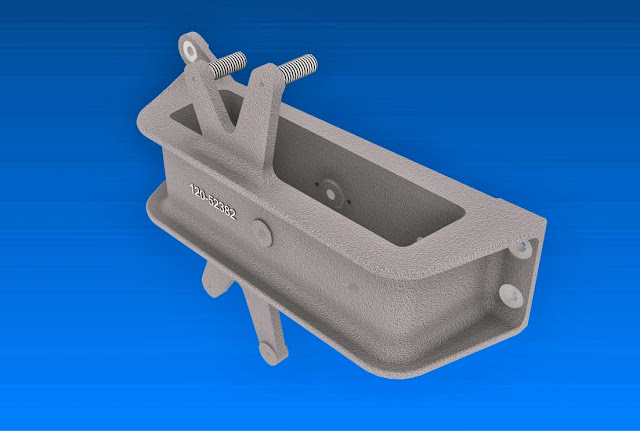 The support assembly for the aileron control, outer wing section.

"I don't know what that tom kat put in my drink last night at the bar,
but my head is killing me this morning."
-Rivet 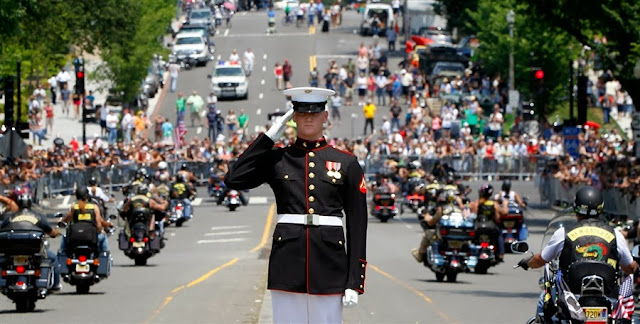 A US Marine saluting 2 million bikers as they rode into Washington, DC
on 11 September 2013.
They make us all proud to be Americans. 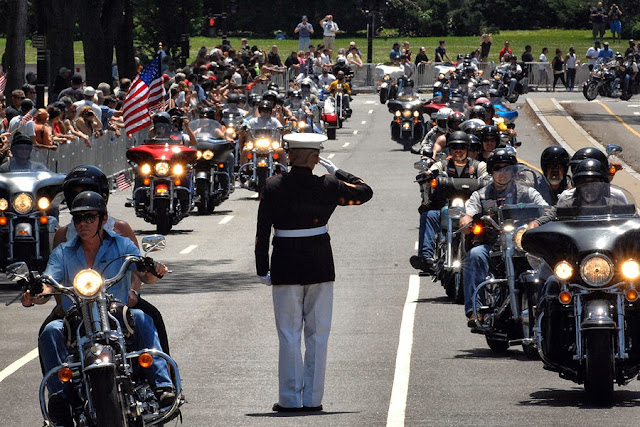 Posted by XP-82 Twin Mustang Restoration Project at 9:00 AM