Another Great Month of Progress on the XP-82!
Work Progress
Most of this last month was taken up by Paul, Randall, Ayman and Jeremy finishing the left-hand fuselage on the rotisserie.  This included the last top skin behind the canopy and the two belly skins from the aft production break forward to the coolant exit door.
The coolant fuselage discharge ducting and the doghouse are almost complete and will be finished by the get together in mid-September.  All of the remaining longeron clips and longeron-to-rib attachments have been completed.
The center section has been going together much faster than I anticipated.  Bryan, Ted and Weezie have been making fabulous headway on the fuel tank divider ribs, machine gun ribs, fuel bay hat channels, wing attach angles, etc.  They have been pressing a lot of these ribs on the large rubber press that we purchased in Oklahoma last year.
We received three of the twelve center section wing attach angles from Peres (Erie).  Thanks, Vic.  The remaining are in production.
We should be receiving shortly our canopy and windshield bows back from Nautilus (Ohio).  Thanks, Ron.
Larry Kelley, B-25 Panchito, contributed a large amount of new hydraulic fittings and some N.O.S. instruments that we will be able to use during the restoration.  Thank you, Larry!
And, Peter Lesche sent us some D Model Mustang fuel tank fittings that he had built extra for some of his customers.  These are some of the very few D Model Mustang parts that will fit our XP-82.  Thanks, Peter.


I have been busy milling two extraordinarily complex center secftion 19' 90 degree angles that have numerous joggles (up and down bends) and 5.5 degree bends at each end where they attach to the wing attach angles.   I tried to purchase these extrusions from Castle Metals with no luck.  Even if I were able to buy them, I would have had to do additional milling on the cross-section(s) and then send them to California in order to have them heat treated in a 20' long oven and quench tank to bring them back from T3 condition to a solution heat treat condition.  A solution heat treat allows the metal to temporarily remain malleable while in dry ice to allow the joggles and the bends to be pressed into the part(s).  If I had gone this route, each 19' angle would have cost us thousands of dollars.  Instead, I used the left-over billets received back from Peres that he had saw-cut out of the wing spar cross-sectioin 4" x 6" billets, instead of turning the removed aluminum into chips.  I was able to mill the 90 degree angles and the multitude of joggles and bends into each piece for a relatively inexpensive cost.  I used YOUR Bridgeport-type mill that we purchased to do these angles.
Two weeks ago, we went to Thrush Aircraft (Albany, GA) and purchased an additional large quantity of angle and T stock that we will need for the center section and outboard wings.  Thank you, Thrush!
At the end of August, I traveled again to Blaine, MN, to look at Pat Harker's D Model F-82 to get some more detailed measurements out of his center section.  The plans that we had converted from Microfiche to CD are not legible enough to get the data that we need.  While there, I also cut cardboard patterns of the inboard gear door inside and outside skins with all of their compound shapes.  The plans don't give us any of this data, so I had to rely on getting a pattern from non-damaged doors.  Pat is going to supply us with a duplicate pair of inside skins for the outboard doors.  Thanks, Pat and Jim, for all of your help and support that you have given us on our project. 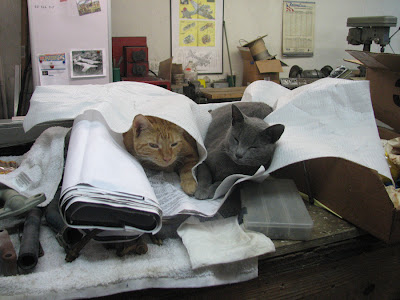 We have received confirmation that our left-hand turning Merlin engine and our MT Propellers will be delivered to us prior to our 17-18 September get together.  Thank you, Nixon Vintage V-12s and MT Propeller!
Katz
The grass (and mice) are always greener and more tasty on the other side of the fence.  So, they came back.  It's so good to have them back home again.
Bumps in the Road
None!  I love telling you this.
Thankx!
Tom
Posted by XP-82 Twin Mustang Restoration Project at 10:03 AM