Another Month Gone Again -- So Quickly!
Center Section
One cannot believe how many parts this center section has in it!  At least a bazillion.  Fortunately, many of them were salvageable out of the three scrapped center sections that we got from Colorado.  We had to remake most of the large parts, i.e. spars, bulkheads, ribs, and stringers, but most of the countless small brackets, angles, clips, reinforcing doublers, etc., were usable.   Bryan, Randall and Jeremy are now heavy into the gear well areas.  They have finished all of the intercostals in the center forward gun bay areas, along with fitting skins on the bottom forward structures.

I was able to purchase the machine gun ammo belting, the stainless steel chutes that the .50 caliber ammunition travels through from the ammo boxes to the guns. I also found the forward gun mounts (new old stock) from Bob Hall, a surplus dealer from the Florida Panhandle--good company to deal with.  I was hoping to have been able to find these gun mounts at the Alaska crash site, but someone had dug all of them up long before we got there.  You could see where they had been previously unbolted from the munched .50 caliber guns, four of which had been left at the crash site.

We also salvaged out of the parts from the Colorado scrap yard one bomb rack and all of the mounting hardware.  A good find.  An even better find was the two carburetor ram air control quadrants.  I didn’t realize that I even had them as they appeared to be just part of the rubble from the scrap yard.  One day a couple of weeks ago while I was working on the governor control quadrants in the engine mount areas, I recognized from the stylized drawings in the parts book that these scraped parts were the two carburetor air control quads.  To make it even stranger, both of these controls are specific to Merlin-powered aircraft.  All of the Odgers’ parts (the collector in Fairbanks that salvaged all of the F-82 parts out of the scrap yard years earlier) that I bought with the crash site, were all Allison-powered “H” models with completely different control quadrants.  We will never know where he got these two.
Belly Scoops, Elevator and Trim Tab
Paul and Ayman have completed the elevator and trim tab and are now heavy into the left-hand belly scoop skins.  All of the structure on the scoop sections has been completed for some time, just waiting for Casey (Atlanta) to complete the wheeling of the skins.  They should have the left-hand scoop completed by mid April and the right-hand scoop by June. 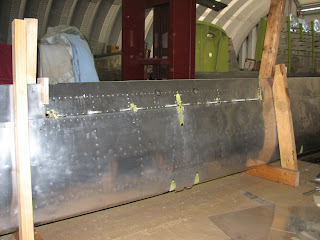 Part Numbers
North American had a policy that if it didn’t walk, talk or breathe, then engrave or stamp a part number in it.  This has made all of our jobs much easier as we can take apart numerous components at the same time, mix all the parts together, send them out for cad plating or painting and get all of them back together again just by quickly researching each number which also has a description of where and how each part fits together.
Does anyone remember the Dagwood and Blondie comic strip where Dagwood is putting a windup alarm clock back together and has a big smile and says, “I get better and better each time as I have less and less parts left over.”
We are all keeping Weezie cross-eyed looking up and researching all of these numbers.  She does a great job keeping up with all of the plans. 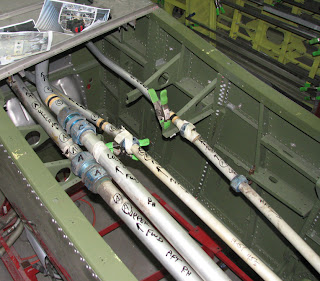 
Weezie dug out all of our original coolant and oil tubes that came from our original fuselage to inventory all of them for duplication.  We ordered all new 2” and 1.125” 5052 .049 wall aluminum, and have sent it all up to Pat Harker’s where in April or May, I will go up to Minnesota and use his mandrel tubing bender to make a set for each fuselage for our XP.  Thankx, Pat! 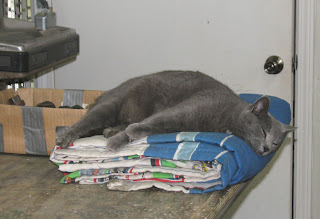 Katz
“Leave me alone! The union boss says that I don’t have to wake up til 5 o’clock to punch out at the time clock.”
Capt. Stanley F. Bloyer, USNR
Fort Walton Beach, FL
One of our main supporters, Stan Bloyer, was tragically killed in a home-built airplane accident, along with the owner of the aircraft, near Niceville in the Florida Panhandle 15 March.  The cause of the accident is still under investigation.

He leaves his wife, Harma; mother, Ruth; and sister, Marsha.
Stan was a dear friend to all of us and a major volunteer and contributor on our XP-82 project.
Stan was a career Navy pilot's pilot, flying everything from A6s, A7s, F14s to F-18s.  He survived 200+ carrier combat missions in Viet Nam and later conflicts.
In his retirement, he flew everything from J-3 Cubs, B-25s to his personal Russian Mig 21.
He will be sorely missed by everyone who had ever met him and experienced his genial personality ... always there to give a helping hand to anyone.
If anyone wishes, in lieu of flowers, a donation can be made to the Navy Tailhook Educational Foundation in memory of Capt. Stanley F. Bloyer.  Go to www.tailhook.org.
With great sadness,
Tom Reilly and the XP-82 Crew
Posted by XP-82 Twin Mustang Restoration Project at 8:14 AM