Work Progress
The troops have been making some very good headway on the belly, doghouse and scoop areas on the right-hand fuselage.  They have had a challenge making everything fit as all of that area was removed when we got the left fuselage, and most of the ribs were severely damaged. Copying them with the exact location of the mounting holes was virtually impossible.  The plans don’t go into enough detail in these areas to give us any useable data.  Also, Pat Harker’s fuselages are slightly different in these areas (Allison-style radiators and exit doors), so getting measurements from his aircraft would not help.


Paul, Randall and Ayman did a wonderful job by backing into the accurate numbers by endlessly fitting and refitting the new/old parts to finally get the exact dimensions.  The final riveting and attaching of all of the doghouse areas of the right-hand fuselage should be completed by the first week in July.  Then we will swap fuselages on the rotisserie and complete the left by exactly duplicating all of the right-hand dimensions.  The left-hand fuselage should go much faster now that we have reinvented the wheel, or so it seems.


Bryan and Ted have been busy completing all of the exit door parts for both fuselages.  Very few parts were salvageable off the XP door we received due to severe corrosion, and nothing survived the Alaska crash.  Even if any parts did, in the Allison-powered aircraft in Alaska, all of that area is different.

We have started set-up of the fixture for the center section parts.  We were very fortunate to be able to hire one of my lead sheet metal set-up mechanics from our Kissimmee days.  Ted Smith had just gotten back from active duty and he called looking for work. I hired him immediately.  This will put a three-man team on the center section assembly--Bryan, Ted and Jeremy--leaving Paul, Randall and Ayman on the fuselages.
Two investors and one volunteer came up from Florida, (one all the way from South Africa), to work three days, 14-16 June.  They and Weezie succeeded in the disassembling of all the hydraulic cylinders (lots of them) for the gear, flaps, doors, etc.
All of these cylinders had been together for 60+ years, laying out in the weather at the scrap yard, but all came apart, and most all of the parts were rebuildable.  Amazing!!   None of the Alaska F-82 crash hydraulic cylinders survived.

Weezie has been busy sorting and glass beading all of the countless steel parts of the throttle quadrant and trim boxes to send to cad plate.  They all arrived back safely and have been resorted back into their correct boxes to start assembly on their respective components.  Kazillions of parts!
We were able to purchase almost all of the instruments for the pilot’s and co-pilot’s panels from Jay Wistler.  Finding WWII instruments without radium dials was a chore, but between my surplus from Kissimmee and Jay’s supply, we now have them all with the exception of the two fuel gauges, which can be assembled from two 2 ¼” B-25 fuel auxiliary gauges with new dials.
We also completed the rework of the two header glycol tanks (cooling system).
We are now into the pilot’s and co-pilot’s switch panels.  Thanks, Pat Harker, for finding our original co-pilot’s panel that was buried in Soplata’s cellar, and for the new production instrument panel that you built for the pilot’s side.
One of our volunteers, a professional model builder, has volunteered to screen print and restore all of our panels.  Thanks, Ken.
We were able to get two new 12.5” x 4.5” tail wheel tires from Charlie White (Chesapeake Airways Services), a huge surplus dealer in Salisbury, MD. Thanks, Charlie.

Wonderful News
When we first purchased the XP-82 from the Soplata family, we received a bill of sale from Soplata to us with an affidavit stating the approximate date of the purchase from NACA to Soplata.  The ownership from USAAF to NACA was never an issue as it was on the FAA Data Sheet.   But, when I tried to register the XP-82 to our corporation, the FAA kicked back the paperwork because it didn’t have the chain of ownership between NACA and Soplata.  They agreed to register it as a B-25 Group/North American aircraft which would have a substantial impact on the originality of our XP-82.  I traveled to Oklahoma City last month, staying one day ahead of a lot of tornadoes, and personally met with one of the registration girls and her supervisor at the FAA office.  They both went out of their way to be helpful, and understood my plight, but could not bend the rules.
While there I met a man doing research, and he told me about a little known website at the Pentagon in DC.  Weezie (she is worth her weight in gold) spent days going through reams of information and found a statement on a Pentagon paper stating the XP-82 was sold to Soplata from NACA.  With that government paper and an affidavit, the FAA agreed to register the XP-82 with the manufacturer as only North American XP-82, which will make a huge positive impact on the XP’s originality.  The good luck we have had with this project has been magical.
We also reserved the N number (“N” is the designated letter for a United States Registered Aircraft) as N-887XP – the last five numbers and letters of our serial number (XP-82 83887).
Katz
“Move over Tubbs, I was here first!” 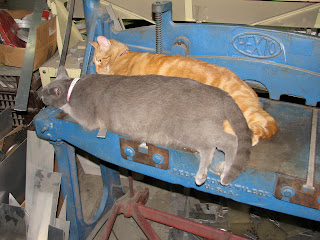 Goals
The goal for this summer is to have both fuselages (less scoops) completed through sheet metal, canopies and wind screens mounted, a substantial amount on the center section completed, all inboard wing attach angles finished, one or both engines delivered to Douglas, a substantial amount of the instrument and switch panels completed, and most all of the throttle quadrants, trim, gear and flap boxes finished.
Thankx
Tom
Posted by XP-82 Twin Mustang Restoration Project at 1:41 PM