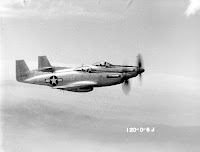 What a pleasant month it has been. I know the progress report is late ... but I still got it out in September.

Now almost everyone knows what our surprise was -- a new hangar for all of us to work in.  With Don Brooks’ next B-17 going together in the existing WWII hangar, space was starting to become crowded.
Center Section
Bryan, Randall, Ayman, Jeremy and Ted are really making surprising headway.  They have completed all of the ribs in between the rear and center spars.  These include the six gun-bay ribs, the main center forward and aft ribs, the two ammo bay ribs and the two fuel bay ribs, and most of the skins are pre-fit.
Forward of the middle center spar they have completed the dual rib structure to hold the large dual gun or radar pod.  We will never hang either of those pods on our XP, but the structure must be installed.  On each side of the dual rib structure, the eight former ribs have also been completed.

I am about one day from completing the two 20’ long .375 x .187 1” angles.  These were very time consuming, but substantially less expensive than if I had to go with the California 20’ oven and quench tank route.


Paul has also been busy on the four ailerons as almost every part in them had to be remade as our examples from both the Alaska wreck and the parts out of the Fairbanks scrap yard were burnt or squooshed beyond repair.
As most of you saw, our LH turning Merlin engine and MT props were delivered a few days prior to our party.  The workmanship on the engine and props is breath taking.  Our second engine will be done by the end of the year.
We now have most of the large parts in our new hangar with the containers holding the tails, horizontal, elevator and flap.
We are expecting our canopy and windshield bows from Nautilus (Ohio) and three more center section wing attach angles from Peres (Erie) very soon.
We are getting closer to the day when we mount the two fuselages on the center section.
A few months ago I purchased most all of the instruments we needed for the two cockpits.  I sent the ones that required overhaul and range marks (colored lines on the instrument dial(s) for pressures, temperatures, airspeeds, RPM, etc.) to an overhaul shop in California.  They will be completed shortly and they will be installed into our new instrument panels.
Chuck Cecile, one of our original team members, made switch panel “masks” to paint all the markings.  A mask is a thin plastic sheet that temporarily sticks to the panel with the lettering, lines, markings, etc., removed, peeled out to allow the spray paint to be applied to the panels.  When the paint dries, one peels off the remaining mask leaving all the painted lettering on the panels.  Ken, one of our volunteers, will have this done for us by November.  Thankx, Chuck and Ken!
Larry Kelley contributed more priceless parts for our XP restoration.  Thankx, Larry.
Weezie has been busy keeping everyone supplied with plans and drawings.  She has learned the location of about every drawing, about 30K of them, where she can pull up a print for us in no time.
Lowell Ford, the plans wizard from California, sent us the attached original drawings done by Edgar Schmued, the head designer at North American who designed the P-51 and the XP-82.
Back in 1941, he came up with the concept of a twin-fuselaged Mustang and when the president of NAA saw these drawings on his table, he said in no uncertain terms, " his job was to design on the P-51 and get rid of those drawings."  Edgar put them in his top left drawer of his desk and, three years later, when Gen. Hap Arnold, the head of the USAAF, came to NAA inquiring about building a two-fuselaged, multi-engine fighter that could fly with the B-29s’ high-cruise speed, he pulled the drawings out, showed them to Gen. Arnold and was told to build two prototypes ASAP.  And, the rest is history.
Katz 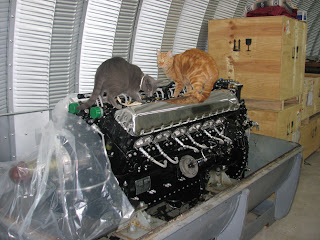 "How much did you pay for this engine??  Do you realize with that amount of money you could have kept the two of us in Kitty treats for the rest of our 18 lives." And, we know that since you have already yelled at us about our claws, we won't scratch anything.


Bumps in the Road
None!
Tragedy
Our sincere condolences go to the Leeward Family and all of the spectators that were lost or injured at Reno this past month.
Posted by XP-82 Twin Mustang Restoration Project at 10:40 AM