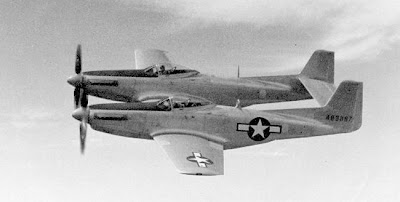 Another month has gone by.  If this keeps going on, I’m going to get older. 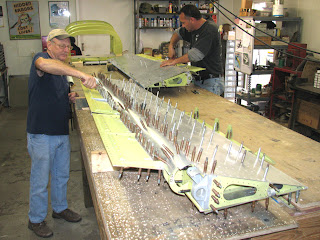 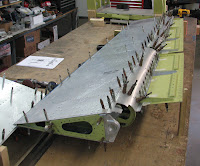 Paul and Ayman have been making great progress on the four ailerons.  The P-82 series have four, while the standard A through J Model Mustangs have only two ailerons.  The leading edge balance weights and gap seal mounts have taken up quite a bit of time to get them aligned properly.  All of the ailerons are now disassembled and are in deburring and painting.  By the beginning of November, they will start being riveted together in major subcomponents.  A very complicated design--Paul has come to Weezie for very detailed, in-depth plans on these ailerons, more than he has on any other portion of the airplane. 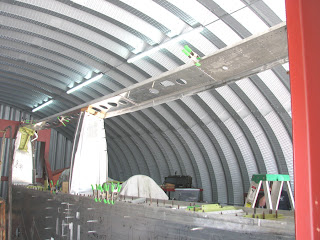 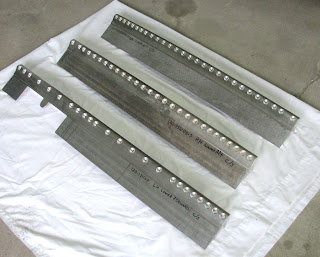 
Weezie will be making another trip over to Thrush with a whole batch of ribs and small parts to bring them up from soft (0 condition) to T-4 hardness.  While there, she will attempt to purchase another odd-ball piece of channel so I don’t have to mill it out of a piece of billet.
Engine
Nixon’s Vintage V-12s will have our second engine finished shortly.  I was able to save a substantial amount of money on the shipping and the insurance to cover the loss/damage of the engine if something unforeseen had happened.  I was able to go to Cannon Aviation Insurance, the agency that covers my B-25, and get a very, very good deal on $250K of loss insurance at 1/6 the rate of what the trucking company offered.
If anyone ever needs aviation insurance, Bob Cannon is the person to go to in Mesa, AZ.  A great company that gives a lot of personal attention to its clients. 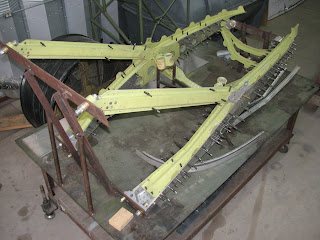 
Barry Hutton, our wizard metal bender from Atlanta, has completed all of the set-up drilling on the two engine mounts.  They are now coming apart and going through the paint process prior to our starting to rivet them together.

California Trip
I have postponed my California trip to look at our second engine for at least another month due my being needed here on the center section and engine mounts on the XP-82, and lending a hand on the repairs to Larry Kelley’s B-25 Panchito.


Switch/Instrument/Fuel Control Panels
Ken Friend, our volunteer, is busy working on the painting and detailing of all of these panels.

Weather
Summer’s gone, and we now have somewhat cooler temperatures, but the gnats, mosquitos and all of their offspring have arrived.  I would rather have summer back.
Bumps in the Road
None! 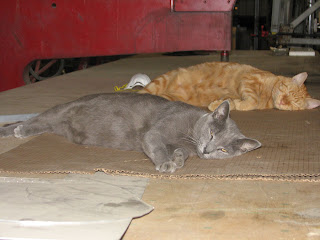 “We are going to have to have a serious discussion with both of you on your request for performance-related raises”. 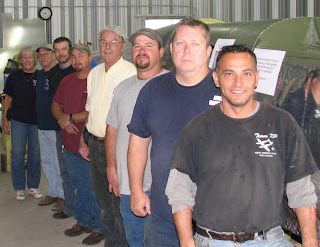 It’s been a long time since we have shown a crew picture of all of our team members.   They are as follows alphabetically:  Weezie Barendse, Paul Flora, Bryan Hortenstine, Randall Lanier, Tom Reilly, Jeremy Scott, Ted Smith and Ayman Tarawneh.  Everyone is doing a magnificent job (except the Katz).

Posted by XP-82 Twin Mustang Restoration Project at 9:42 AM