Another year gone by.
Merry Christmas and Happy New Year to everyone! 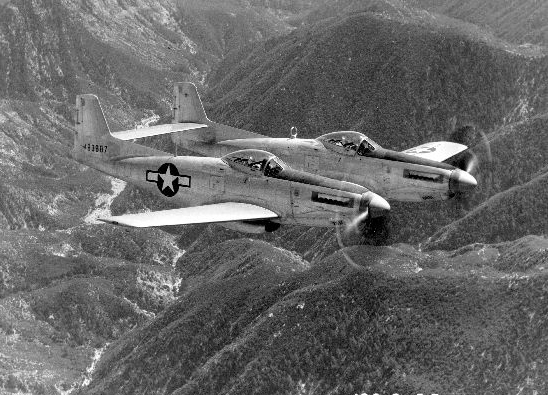 2012 should be an incredible year for the restoration of this magnificent and extremely rare fighter! 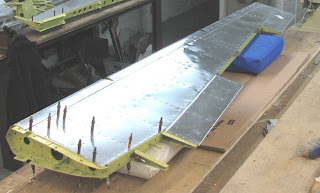 Rudders & Engine Mounts
Paul and Ayman have almost completed the two rudders and trim tabs.  I have chosen to have all new trim tab attach castings remade out of 7075 aluminum instead of magnesium as these mag parts have been failing on a regular basis on the Mustang series aircraft.  Not expensive at all and well worth the money for the safety margin that the additional strength will give us. 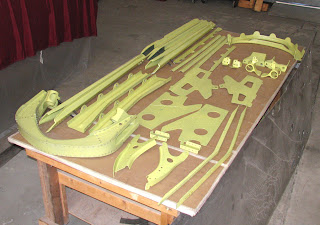 Paul and Ayman are now into final assembly of both engine mounts.  All of the engine mount parts are now drilled to size, deburred and painted to the correct color.  The mounts will be very time consuming as they are mostly shot together with high shear rivets. 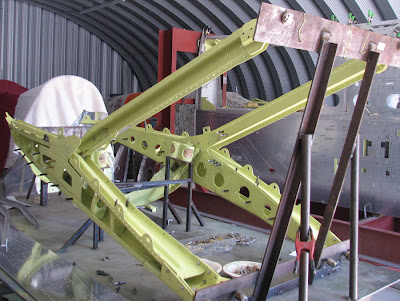 Nixon Engines will have the left-hand engine (right-hand turner) completed right after the first of the year and I will go to Callieforniae (as Arnold says) to pay the final installment and ship the engine to Douglas.   Again, I will purchase the $300,000 dollar insurance policy from Cannon Aviation Insurance to cover any shipping damages, a remote possibility, but a very wise thing to do. 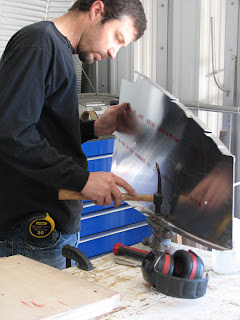 Bryan, Randall and Jeremy have been making excellent progress on the center section.  They have spent a week building the two stainless box areas which the ammunition trays rest in.  These boxes are made of stainless which is more difficult to work with than aluminum.  They have also made great headway on fitting and drilling another 4’ x 19’ aluminum panel to all of the stringers, bulkheads and wing attach angles.  Two more to go, plus the leading and trailing edges. 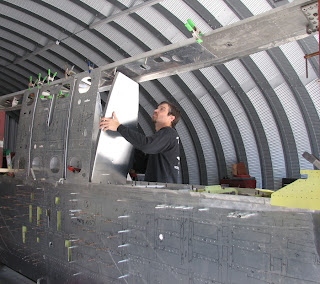 Bryan has been busy pressing the new bulkheads that fit from the center to the forward spar, and Randall and Jeremy are just starting on the fuel bay hat sections. 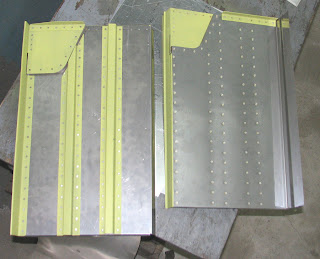 The three scrapped sections of center section that we were able to purchase along with all of the Colorado parts (these are from the F-82 scrap yard in Fairbanks) have been invaluable.  The amount of center section parts, gear forgings, hydraulic cylinders, wing attach angles, stringers and bulkheads have made the restoration of our center section much easier.
Fuselage

Casey (Atlanta), English wheel wizard, has just completed our coolant exit duct parts.  Very difficult complex curves where the parts transition from the exit duct to the sides of each fuselage.  These parts will complete all of the coolant exit duct areas, leaving only the dorsals and the belly scoops to complete, of which a lot has already been accomplished on each.
Weezie has been busy with all of the plans, and she will be bringing all of these new bulkheads and formed parts to Thrush for heat treating right after the first of the year.
Vic Peres (Erie) has been making very good headway with the remaining outboard wing attach angles.
Instrument Panels 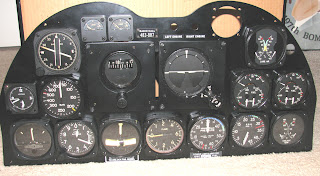 We now have both panels basically complete with all of the overhauled instruments installed.  Just waiting for one coolant temperature gauge and a reface of the two new vacuum gauges.
We have contracted for a screen print for our switch panels.  We tried the paint/mask route and the letters would not cleanly peel out; thus, the end result would have not been satisfactory.

Propellers
Our two propeller governors manufactured by MT Propeller in Germany have been shipped.   We should have them by mid-January.  This will complete all of the propeller parts that we have ordered.

Good News
I have been searching the country for months for the two special fuel gauges.  Would you believe I found two of them in my stock of instruments that I had brought up from Kissimmee, and I contributed them to the XP project.  They are now at Instrument Pro for overhaul and new faces.
Bumps in the Road 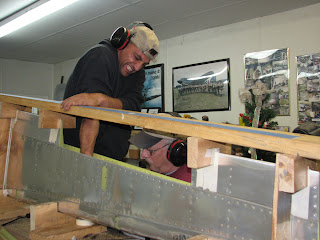 The rudders took quite a bit longer due to the extremely difficult access to buck the rivets.  And the trim tabs were even worse.


Katz
“If we stay nice and quiet, maybe Tom won’t make us go back to work!” 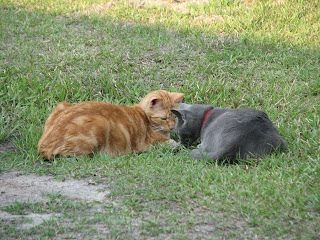 A huge thank you to our work team and all of our investors for being part of this magnificent XP-82 Twin Mustang adventure.  It would not be possible without all of you being a part of it.
Tom
Posted by XP-82 Twin Mustang Restoration Project at 8:52 AM