Last year went by so quickly, but we got lots accomplished on your XP-82!
Center Section 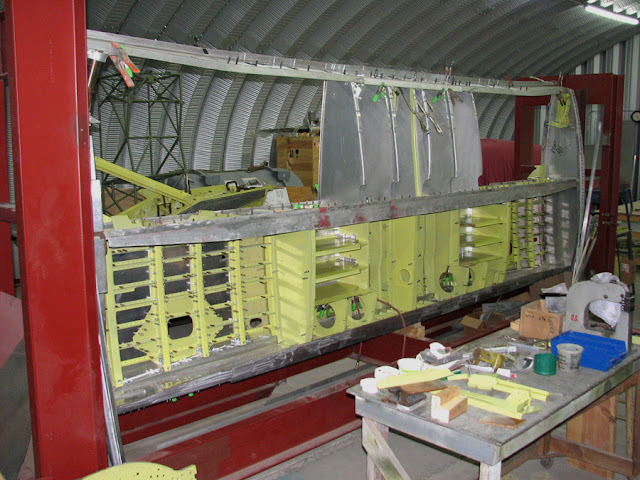 Randall, Jeremy and Bryan have been busy on the ammo bay box walls and associated ribs.  The forward spar caps are now also formed to their final shape.  Bryan took them up to Standard Aero Services to use a special shrinking machine for a compression bend--one that had a much higher capacity than our.  North American, the manufacturer of our XP-82, was always known to manufacture aircraft in a very straight forward, non-complex approach, unlike Voight F4U Corsair, or Lockheed, P-38 Lightning.  But, this forward center section spar was the exception.  North American must have had a bunch of British engineers on the payroll to devise a more complicated design which the Brits are famous for. 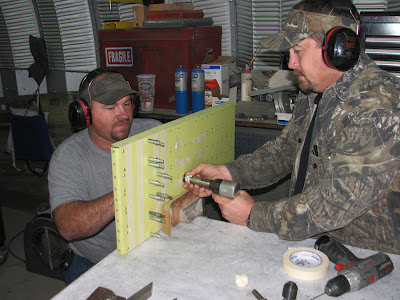 Anyway, all of our center section complicated parts are now completed and Vic Peres (Erie) is just completing the last of our outboard wing attach angles.

All of the heat-treated parts in the center section are now processed.  Thank you, Thrush Aircraft! 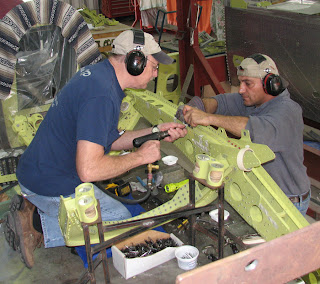 Engine Mounts
The final assembly by Paul and Ayman of both engine mounts is coming along nicely.  The assembly is quite time consuming as manhy of the fasteners are high shear styles, of which each takes substantially longer to install than a regular rivet.  We are shooting for both to be complete by the end of February.

Horizontal, Elevator, Rudder, Trim Tabs and Verticals
Nautillus (Ohio) has been making good progress on all of the small attach points, hinges, arms, etc.  As mentioned last month, I have chosen to make all of these parts out of 7075 T6 aluminum instead of relying on the original cast aluminum or magnesium materials.  The failure of many of these cast parts on Mustang series fighters has caused a number of very ugly accidents in the past. 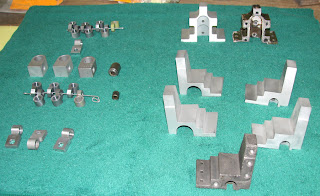 
I have spent the last part of December and all of January reworking all of the “small” parts:  switch panels, Cannon plugs (electrical connectors), hydraulic cylinders, actuators and hundreds of other associated small parts.
All of the gear retract, flap and one of the two gear door cylinders are now completed through OHC.  We are waiting for some machined parts from Peres (Erie) to complete the last gear door cylinder. 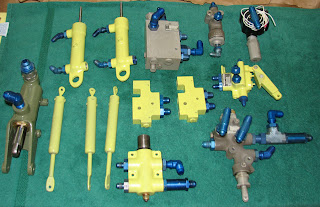 We had a wonderful volunteer with us the entire month of January helping.  His skill level is enormous, learned by his long Navy career being involved with EC121 Constellations, P2V Neptunes and P-3 Orions.  All three are surveillance aircraft.  Our main job together was to disassemble all of the original Cannon plugs throughout the entire aircraft and complete the hydraulic cylinders and trim boxes.

It would have been nice to have been able to just buy new Cannon plug connectors, but none of the old-style are still available in the surplus market.  So, we had to carefully disassemble each one--a very tedious job as each had been assembled and in the weather for 60+ years--then unsolder all of the wires and glass bead all of the parts.  We had to do all of this just to maintain the authenticity of our restoration.  All of the hundreds of connector parts are now at the anodizing company (aluminum plating) and when they come back, they will all look brand new.  We will replace all of the inner pins and sockets with new parts so we will technically have all new connectors with the restored original outer shells.
Our switch panels are out being screen printed by Chuck Cecile, Advance Sign Graphics of High Point, NC.  Chuck does first class sign work...so if anyone needs any signs, his company is the place to go to.

We have also restored both electrical panels that mount right forward of the instrument panels in each cockpit.  These panels hold the voltage regulators, reverse current relays and a multitude of other electrical components.  Thanks to Jim and Pat Harker for supplying us with a number of these new electrical items.

The trim boxes that house the elevator, rudder and aileron trim, plus the landing gear and flap handles, are nearing completion, waiting for the last of the cadmium-plated parts to return.   We were very lucky to be able to obtain a complete left-hand trim box console for the Soplata G- model Mustang windshield trade years ago.  This console, along with two other severely damaged and incomplete boxes from the Colorado parts, gave us enough to make both of our fuselages have full dual controls.
The “still-need-to-find” parts list is getting shorter and shorter each month.  The last main items that we need are:  a right-hand canopy closure crank, gear door parts which can be manufactured from plans, and one hydraulic relief unloader valve.

Engines, Propellers, Radiators and Instruments
We have received both of our new production prop governors from M.T. Propeller this January.  This completes our M.T. Propeller order.  Thank you, M.T. of Germany!
Our right-hand turning engine is now complete and I will be going to California on 9 February to accept it and put it on an insured commercial carrier for delivery to Douglas.  Thank you, Vintage V-12s, Mike Nixon and Jose Flores for a magnificent pair of OHC Rolls Royce Merlin engines for our XP-82!
Martin Radiator is in the final stages of completion of both of our new production radiators.  Massive radiators that each weight about 200 lbs.   Martin Laudner, the owner, has been in the business of manufacturing replacement radiators for P-51s for at least 100 years or so it seems.  Gorgeous pieces of workmanship.  Thank you, Martin!
We are waiting for the last of the four OHC instruments to come back from Instrument Pro in California.  I also contributed two new hydraulic pressure gauges, two new oxygen regulator blinkers, two new voltage regulator bases and a new static selector switch out of my Kissimmee stock of parts, along with bags of special DD rivets made out of unobtainium aluminum.   Unobtainium is the acronym we warbird-types use for something that is no longer obtainable.  Thank goodness that I did not scrap these rivets after the hurricanes in Florida.


Bumps in the Road


None
Katz
“I was here first.  Go get your own blanket.” Back to the Connie with the four oily, drippy Curtis Wright 3350s recip engines that our volunteer was crew on.  Do you know why they never shot a Connie down over Cuba during the Bay of Pigs??  (Actually they did down one using a MIG.)   They didn’t have oil seeking missiles.
Thankx.
Tom
One of our volunteers, Max, severely burned his right hand from a spray of gasoline onto a bulb-type drop light which ignited the fuel.  We wish him a speedy recovery and no loss of use of his hand.
Posted by XP-82 Twin Mustang Restoration Project at 8:17 AM