February was another fabulous month with major accomplishments completed!


Paul and Ayman have completed both firewall forward engine mounts.  The major problem was to figure out how North American closed out the riveting sequence.  Some of the close out areas really had us all studying how to do it, but we finally figured out the difficult combinations.
Belly Scoops


Now with the mounts completed, Paul and Ayman are now completing the remaining four scoop sections.  The two aft discharge scoop sections, one on each fuselage, have been finished for some time now.  Casey Hill, English wheel wizard from Atlanta, completed the wheeling (compound forming) of the two forward scoop outboard skins so that the team can now complete them.
The two middle scoop sections are well on their way to completion with Casey having to form only two more compound skins.  Both coolant exit doors are now half completed.
Radiators


Both of our radiators are now complete--just waiting for four of the eight mounting castings to be completed by Peres (Erie).  The original castings of these four were totally corroded along with the side plates as they were sitting down in the dirt and moisture for 60 years.
Randall and Jeremy ended up having to completely re-fabricate all new radiator side plates as all four were corroded beyond economical repair.  When we receive the four remanufactured mounting castings from Peres, we will attach them to the side plates, along with the four airworthy originals, and then ship them to Martin Radiator to complete the mounting assemblies on the radiators so that they can be pressure tested.  Then they will be sent to us.
Center Section


Bryan, Randall and Jeremy have been completing the multitude of small parts that go into the areas between the center and forward spars: ribs, access panels, stringers, fuel bay hat channels, etc.  It seems to be endless but we can see the light at the other end of the tunnel and it doesn’t seem to be an oncoming train.
Vic Peres is completing the last of our two upper wing attach angles and the two lower attach straps. 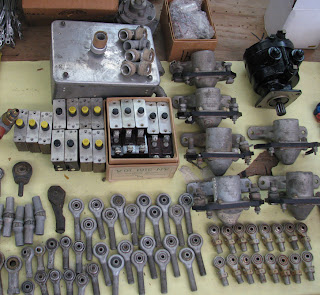 On the 10th of February, I traveled to CA to pick up our second engine from Nixon and to
visit ET Supply, a surplus store that has been in downtown LA since the end of the war.  They have thousands of line items, but the only way to really see everything that is there is to visit in person.
Emile, the owner, was very helpful to allow me to plunder through the whole warehouse where I was able to find a treasure of parts to fit our XP project:  fuel shutoffs, relays, breakers, valves, harnesses, hardware, bearings, pulleys, latches, cables, pumps, etc. etc., etc.--all new old stock.  Thank you, Emile and ET Supply.
An ET Supply “Oops” Story
An interesting story about Emile.
Many years ago, right after WWII, Emile worked as a young helper at a surplus store in Los Angeles.  There was a man who would frequently come into the store looking for aircraft parts.  During each visit he would pull huge amounts of parts off the shelves onto the floor only to buy one or two items and leave the rest for Emile to clean up and re-stack.
After a while Emile had enough of this and threw the eccentric buyer out and told him not to come back again.  The next day the then owner of the surplus store came to Emile and told him to not cause any more friction with the man.  The man was, oops..... Howard Hughes.
Electrical, Controls and Hydraulics


I have been busy working on all of the sub components, completing one item after another. Trim boxes, hydraulics, electrical shelves, hydraulic tank, Cannon plugs, etc., etc.  One of the main components that I put together were the control stick towers for both cockpits.   I have spent so much time at my work table assembling these 100s of items that the men have given me the nickname   "Geppetto” (who remembers who Geppetto was?)
Engines
Our second Merlin engine was delivered during the second week of February from Vintage V12s of Tehachapi, CA.  Again a magnificent piece of workmanship.  Thank you, Mike and Jose.  Both engines are now sealed in their steel shipping cans and safely stored in our hangar.

We have received the last of the four OHC instruments from Instrument Pro in California.  I also contributed two new hydraulic pressure gauges, two new oxygen regulator blinkers, two new voltage regulator bases and a new static selector switch out of my Kissimmee stock of parts, along with bags of special DD rivets made out of unobtainium aluminum.   Unobtainium is the acronym we warbird-types use for something that is no longer obtainable.  Thank goodness that I did not scrap these rivets after the hurricanes in Florida. 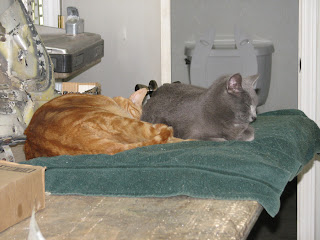 Katz -   Allison to Rivet
"You should be using Charmin bathroom tissue."
Quote of the Month 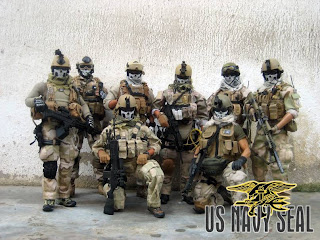 While interviewing some Navy Seals, Dana Perino, George Bush’s Press Secretary, asked the Seals that with all the different countries they were going to, did they have to learn many different languages.
The reply was “Ma’am ... we don’t go there to talk.”
Thankx.
Tom
Posted by XP-82 Twin Mustang Restoration Project at 9:15 AM