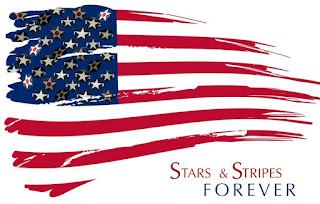 Center Section
Randall, Bryan and Jeremy are on schedule to have the drill-up and final fitting of the leading edge completed around the end of July.  Then the entire center section will come off the fixture one piece at a time to be deburred, counter sunk where applicable and primed.  Then they will final fit all of the components.  All of the parts will then be reassembled on the fixture for final riveting.  I project that final riveting on the center section will start around the beginning of August and take approximately three months to complete.
It will then come off the fixture for the trailing edge and flap bay areas to be assembled and attached.  Most of the trailing edge parts have been completed for some time now, so that part should go quite smoothly.  The remaining sheet metal parts to be completed on the center section are the three top ammo bay doors and the four main gear doors—complicated parts, as we have virtually no intact parts to copy.  Last year I went to Pat Harker’s facility (Blaine, MN) to make patterns of his doors, which will help. 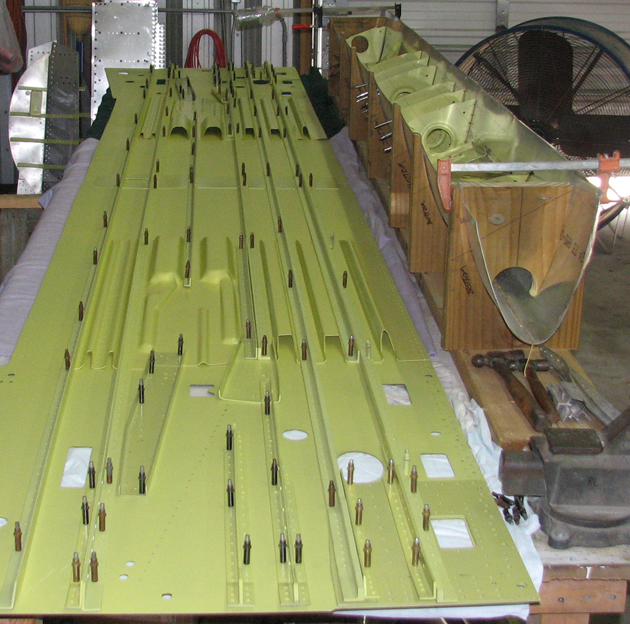 The center section waffle skins being prepared for riveting and the leading edge is in the drill fixture on the right. 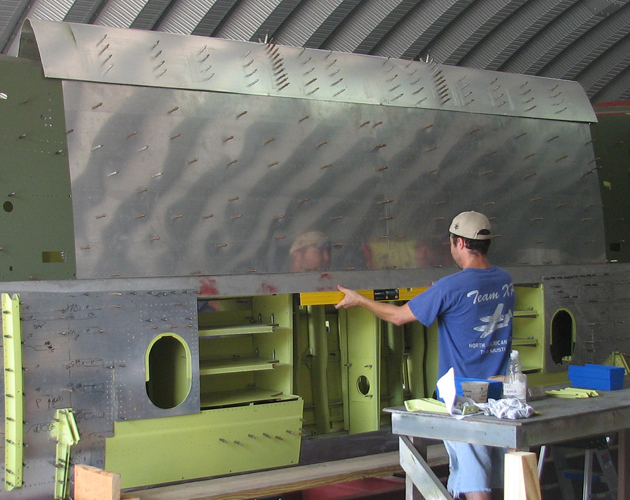 The leading edge is being fitted between the two fuselages.  Bryan is double-checking the fixture for wash-out. 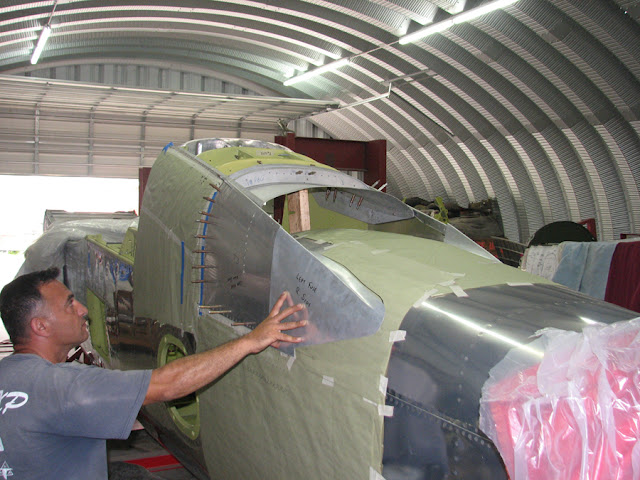 Coolant exit door in trunk with the unskilled door in place up against the lip stop, held in place by the wood block.

During the fitting and final assembly of the trunk walls and the coolant air exit door, Paul and Ayman discovered an unknown design change from our XP-82 and the first 20 production Merlin-powered models.  The entire radiator, exit door and trunk design are dramatically different between our XP, the Merlin-powered B models and all of the subsequent Allison production models.  During the fitting of our original exit doors and trunks on our aircraft, we found that the doors would not fully open as there was a design stop lip built into our two trunk walls.  On the 20 B models, and subsequent 250 Allison models, there is no lip.
This lip does not allow the XP door(s) to open anymore than flush with the belly walls, restricting the exit air through the radiator, thus forming a much smoother airflow.  We have very clear, detailed pictures of a B model’s doors wide open in flight, but not one picture out of dozens of our XP with the door(s) any further open than flush. The design in our XP must have worked well as it flew very successfully from 1944 to 1950 with no overheating issues.  This aerodynamic change could possibly be the reason our XP had a top speed of 486 mph, while that of all of the subsequent models was 460 mph.  One will never know. 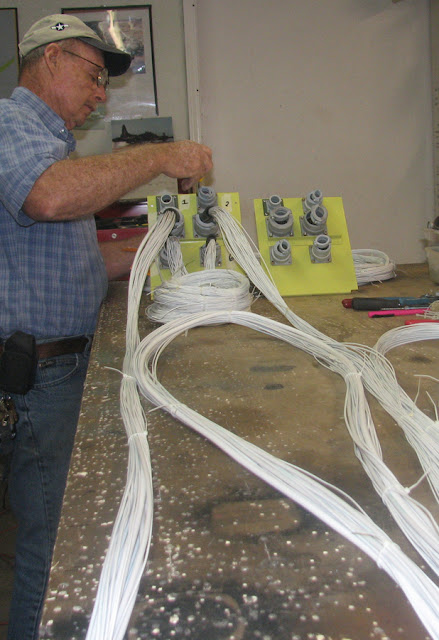 The pilot's Cannon plug pedestal is on the left, and the right-hand cockpit is on the right. 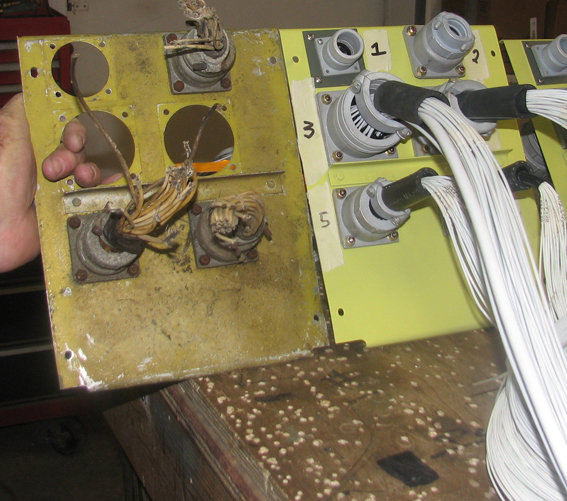 Pedestal plugs before and after. 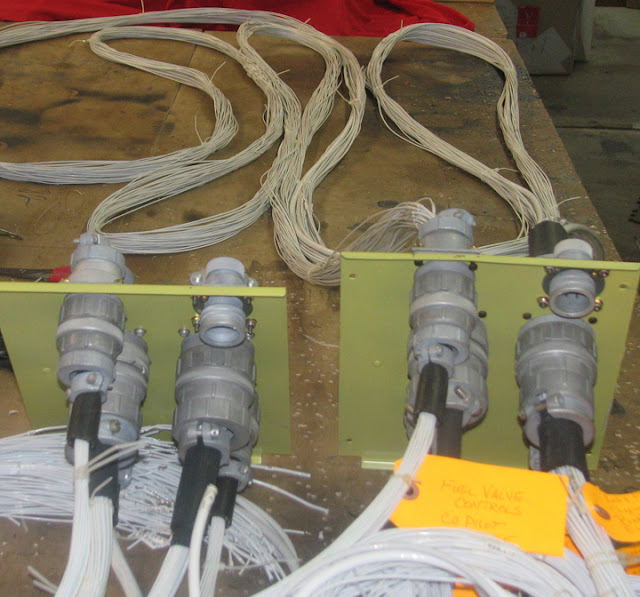 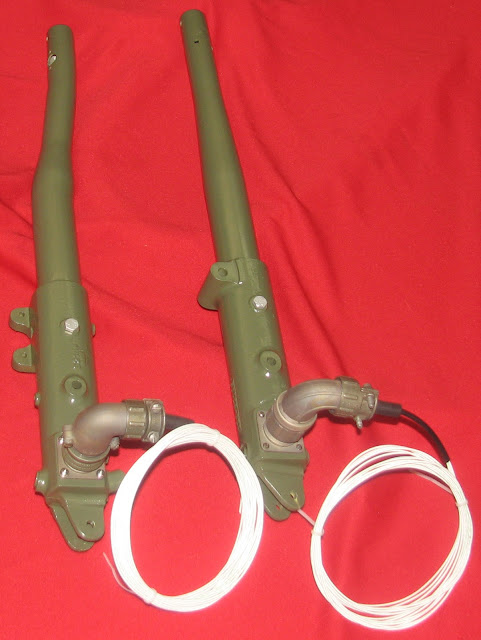 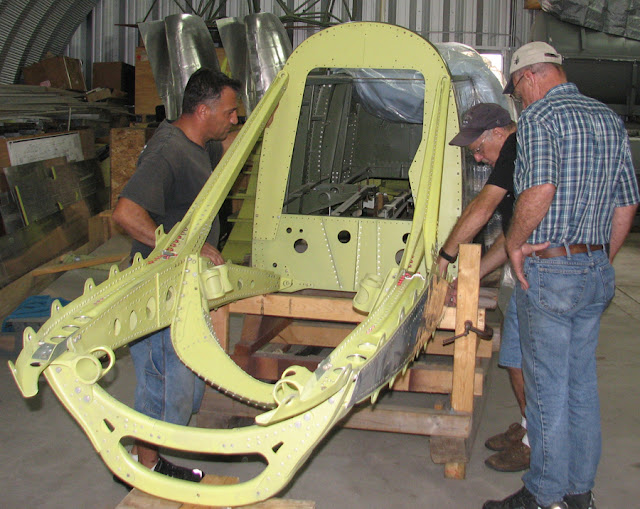 Test fitting the engine mount on the right-hand fuselage

Volunteers
All of our placards, canopy crank handle and trim wheel parts were delivered by our volunteer, Ken Friend.  Ken is also the model builder extraordinaire that I have told you about.  He will be here 1-2 September with many of his award-winning models on display.  Thankx, Ken! 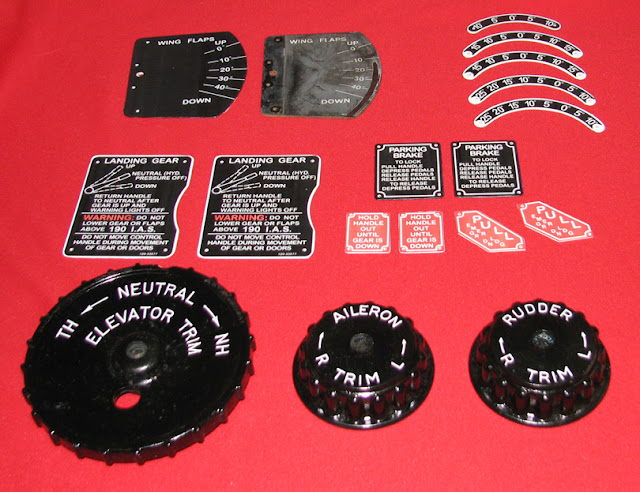 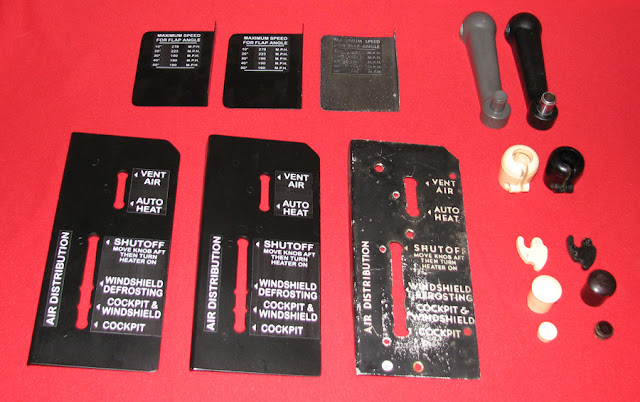 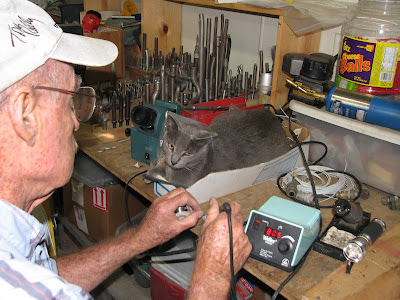 "If you accidentally splatter any more of that hot solder on me, there is going to be big trouble."      Rivet

Posted by XP-82 Twin Mustang Restoration Project at 10:50 AM