What a great progress month is has been! 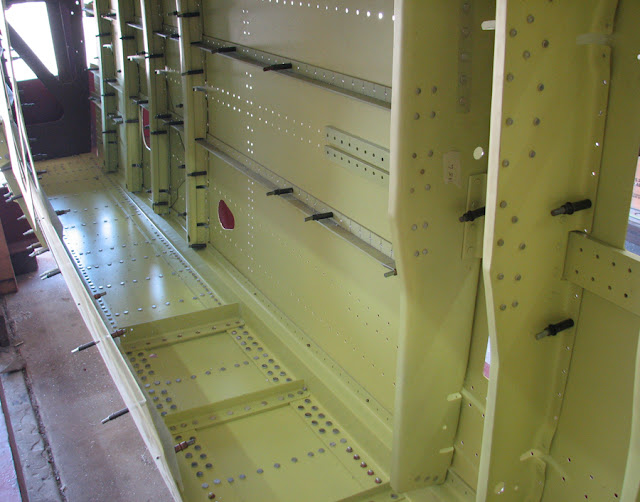 
Bryan, Paul, Ayman, Randall and Jeremy have been busy riveting and reassembling all of the subcomponents in the center section.  As of now, two of the three spars, aft and center, are completely done, and they are heavy into the forward spar and machine gun box area.

Jeremy is making good progress on the subassembly of the leading edge ribs of the forward spar.    The gun bay box between the center and forward spars is also nearing completion. 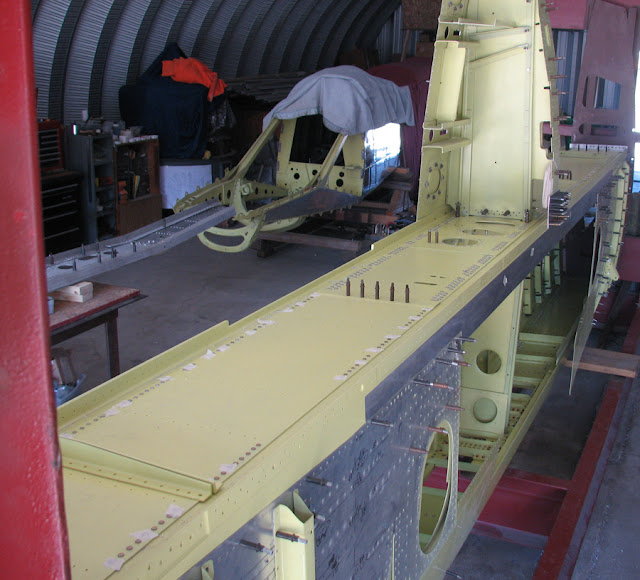 The four original wing attach angles from the Colorado parts find passed N.D.I.  They are now painted along with the hundreds of other parts waiting to go together with the rest of the center section parts. 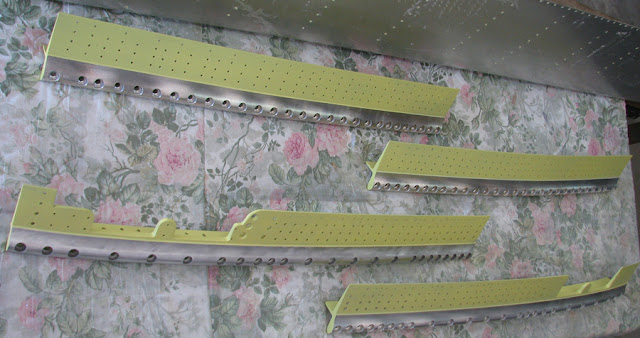 After three weeks off, Ayman will be installing all of the cable guide assemblies in the aft section of both fuselages, assembling both seats and fitting the right-hand firewall stainless dishpan.  He will also be attaching all of the ribs and structure to the forward spar.

My job this coming month will be getting started on the two heat exchangers, milling on the Bridgeport mill another center section leading edge-to-fuselage bow (thank goodness this is the last one), milling miscellaneous small parts that the men need on the center section.

I am also having to build from scratch the six center section leading edge gun ports.  None of the ones out of the Alaska wreck were even recognizable as they were mashed due to the fact that they were the second thing that hit the icy ground at 300+ knots, right after the two engines and props.  They are very complex stainless 3” tubes that fit the gun barrels and cooling jackets, plus 1/8” curved plates, formed around the front of the tubes to match the airfoil on the leading edge on the center section.  Tricky little pieces with all of their compound bends, and, to make it worse, they are made out of thick stainless.

P/F 82 Variants
I previously wrote that there were 24 Merlin-powered 82s including one “C” and one “D” model.  Actually, both the “C” and “D” models were pulled from the 20 “B” model manufacturing line to become radar and gun pod modifications.  So, not to confuse everyone, the accurate count is:

Major Differences Between the XP-82 Series,
“B” Models and “E” through “H” Models

The “H” models were winterized versions modified from the “E”, “F” and “G” model airframes which mainly saw service in Alaska.

Nothing firewall forward including the engine mount, the Glycol and oil coolant systems was at all alike between the Merlin and Allison-powered aircraft.  The later models from the “E” to the “G” reverted to the oil cooler being placed in the belly scoop just forward of the coolant radiator as were all of the P-51 Mustang series aircraft.  All of the 22  Merlin-powered aircraft had a heat exchanger (oil cooler) mounted in front of the oil tank in the engine compartment.

Five are still in existence with only two in civilian hands.  Those five are

I am now absolutely positive (maybe) that all of this information is now correct. 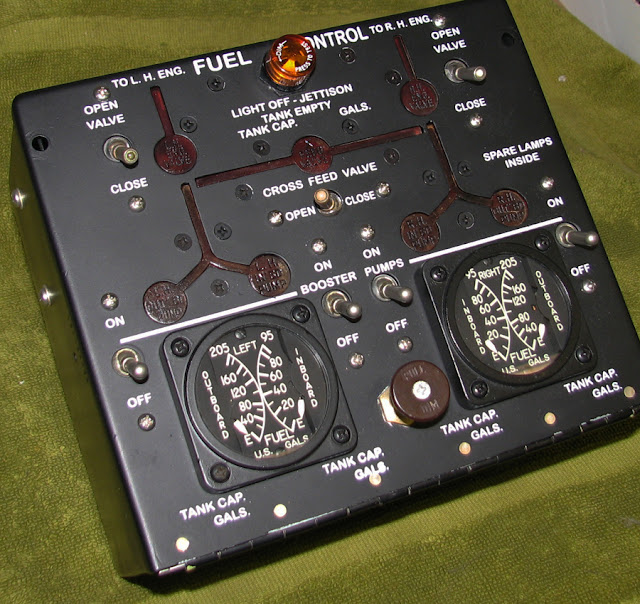 Subcomponents
Ken Friend, Weezie, one of our volunteers and I have been busy completing the last of the wiring harnesses, the fuel control box that is mounted between the pilot’s legs,  the two throttle quadrants, the center bomb rack and the pilot’s electrical breaker panel.  The throttle quadrants were a real challenge as each one of them had at least a bazillion parts that all had to go together just right or nothing would move. 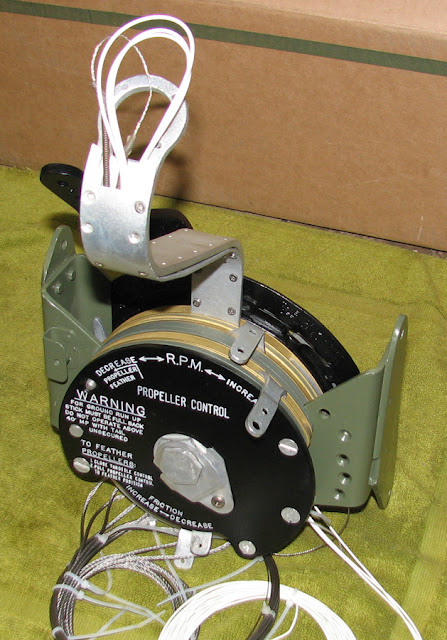 (Remember the Dagwood and Blondie comic strip?  Here’s Dagwood at the kitchen table putting an alarm clock back together and he said with a smile, “I’m getting better and better at this.  I’m having less and less parts left over.”)

Thank you to Ken Friend and Chuck Cecil for the screen printing jobs they have been doing on all of the miscellaneous switch and breaker panels.

Thank you to Ken Friend and Chuck Cecil for the screen printing jobs they have been doing on all of the miscellaneous switch and breaker panels.

Bumps in the Road
Bryan, one of our lead sheet metal mechanics, had to give us notice due to medical issues with one of his parents that he must take care of out of state.

Some of the subcomponents completed since December 2011 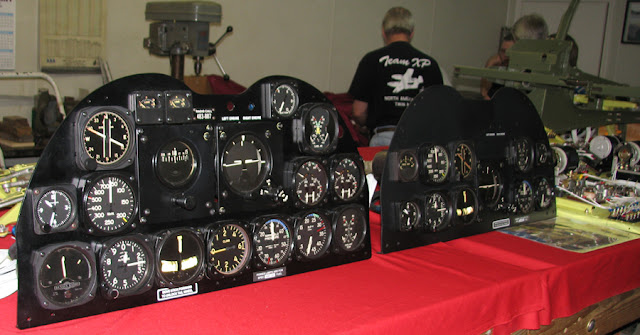 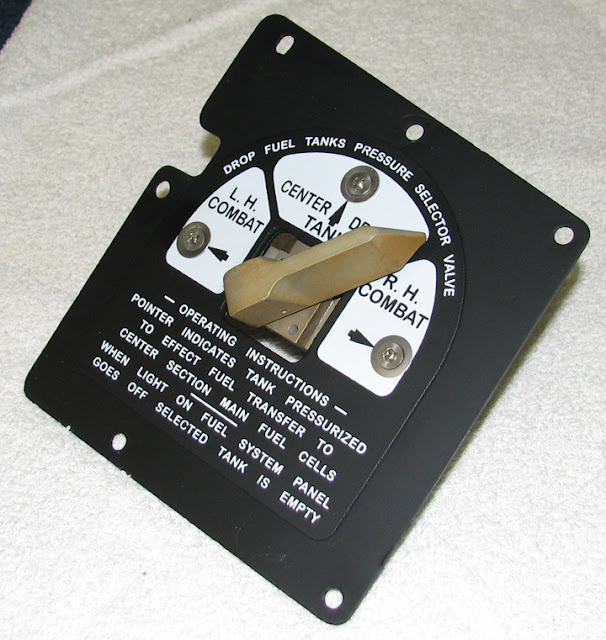 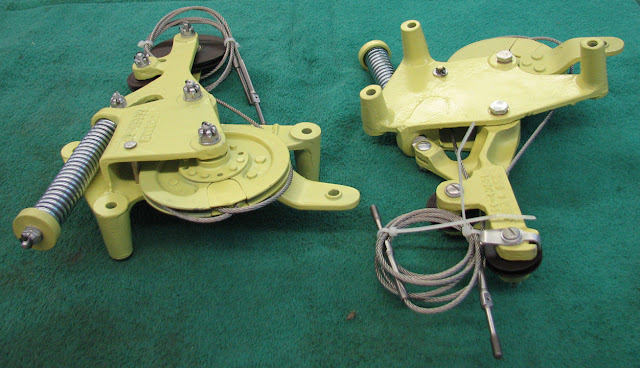 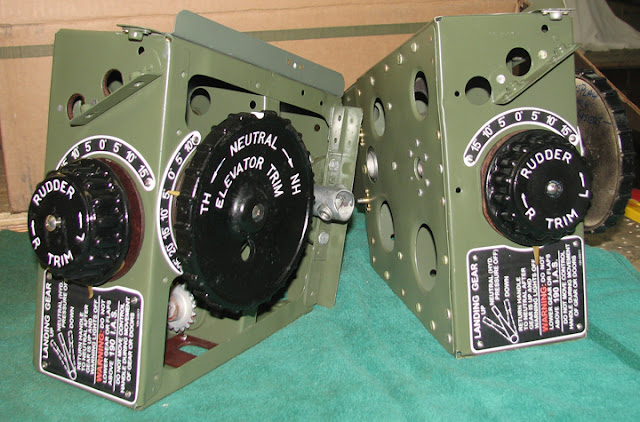 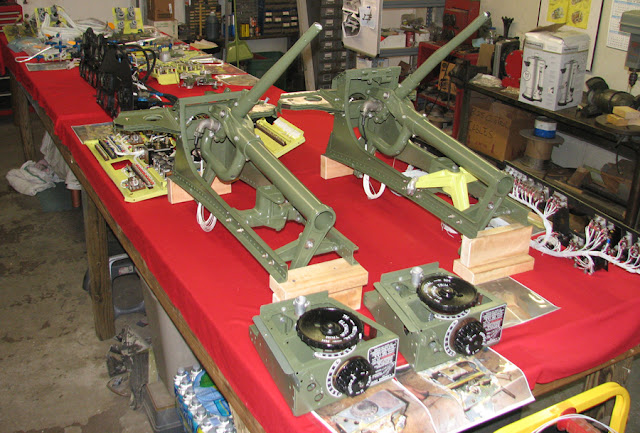 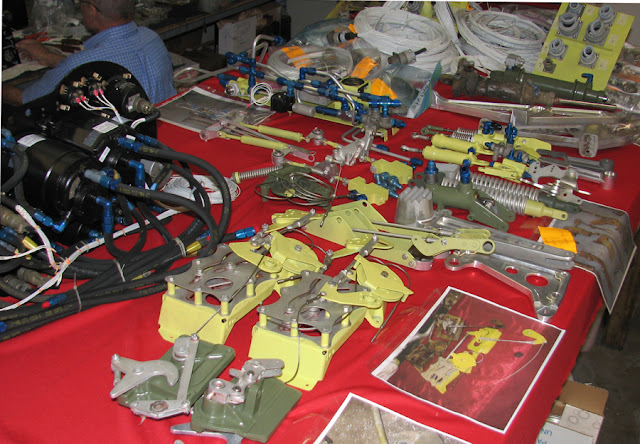 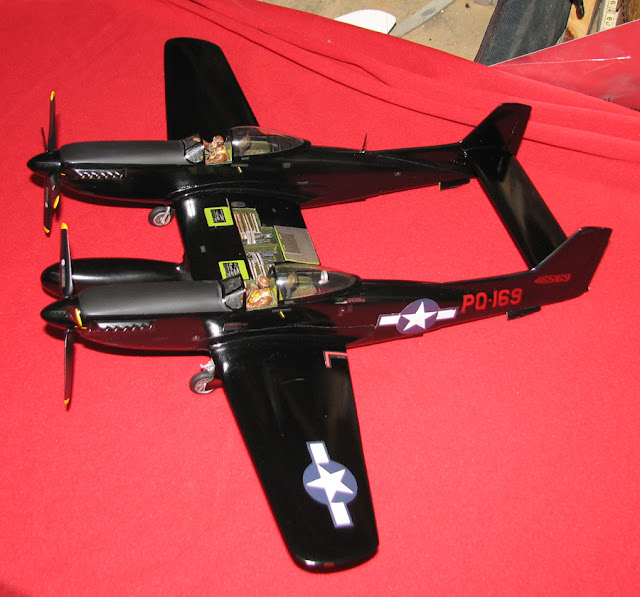 Models
Our award-winning model builder extraordinaire/volunteer, Ken Friend, had his extremely detailed models on display at the hangar.  He has built a number of these XP-82/P-82/P-51 models for our volunteers. 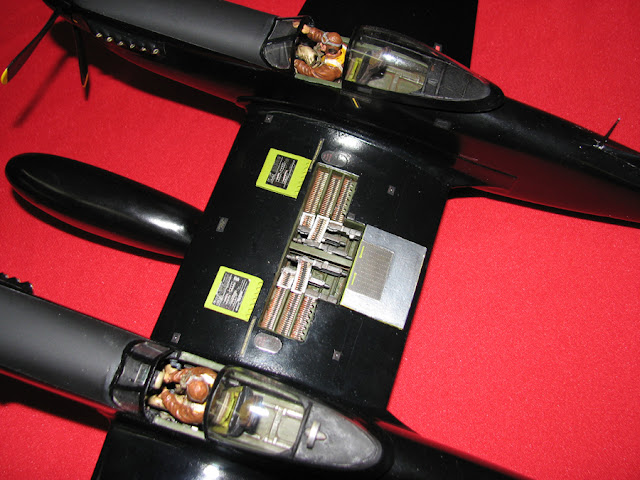 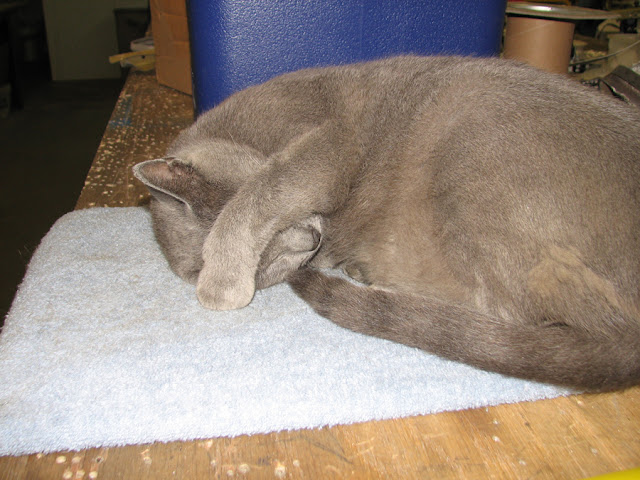 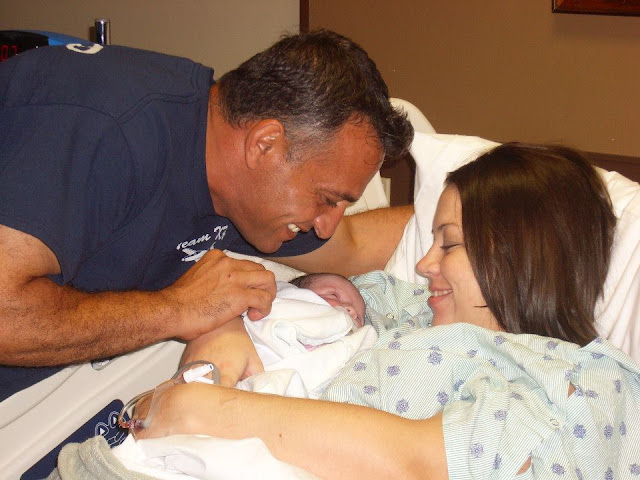 Last month we wrote that Ayman and Rose had a wonderful little baby girl.  Tragedy struck six days after Ayah Rose's birth.  Rose, the 27-year-old mother, died unexpectedly from unknown reasons.  All of our prayers, thoughts and best wishes go out to Ayman and Rose's family. 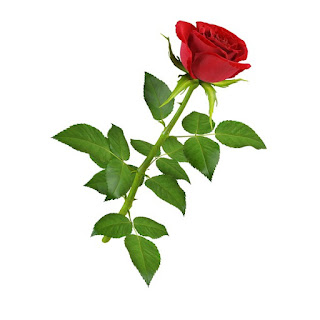 “We contend that for a nation to tax itself into prosperity is like a man standing in a bucket and trying to lift himself up by the handle.”
-Winston Churchill - 30 November 1874 - 24 January 1965