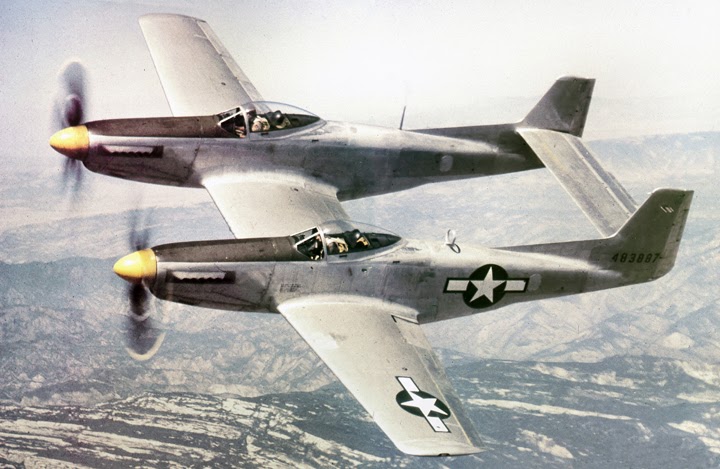 It’s a new year already.
It seems that I was writing the January 2013 newsletter
just a couple of months ago.

Ayman, Jeremy, Tim and our part-time volunteer, Josh, have predrilled all the stringers, ribs, bulkheads and spar caps, actually a mirror image of what was done on the right wing a couple of months ago. Very soon Paul and Randall will complete the final small tasks in the right wing prior to it going into the fixture, and they will switch over to the left wing.  Ayman and Tim will then complete the coolant exit doors and fuselage ducting. 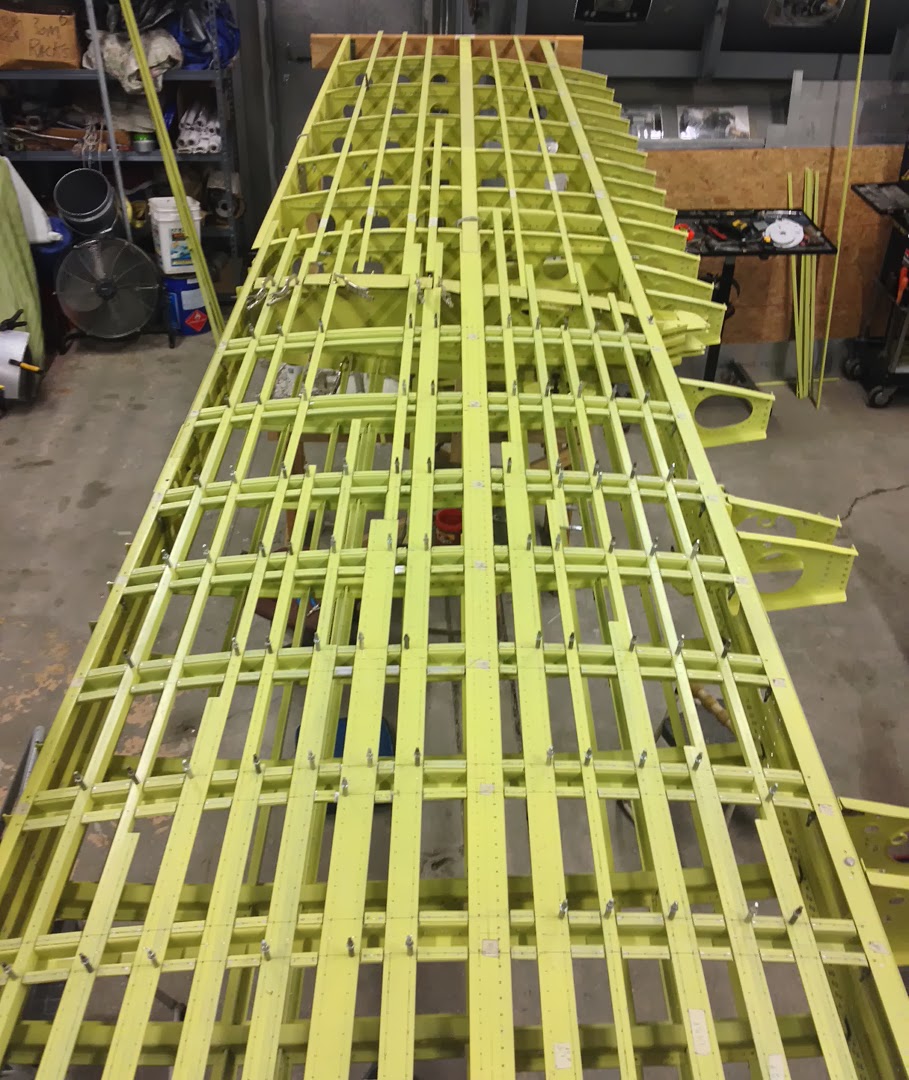 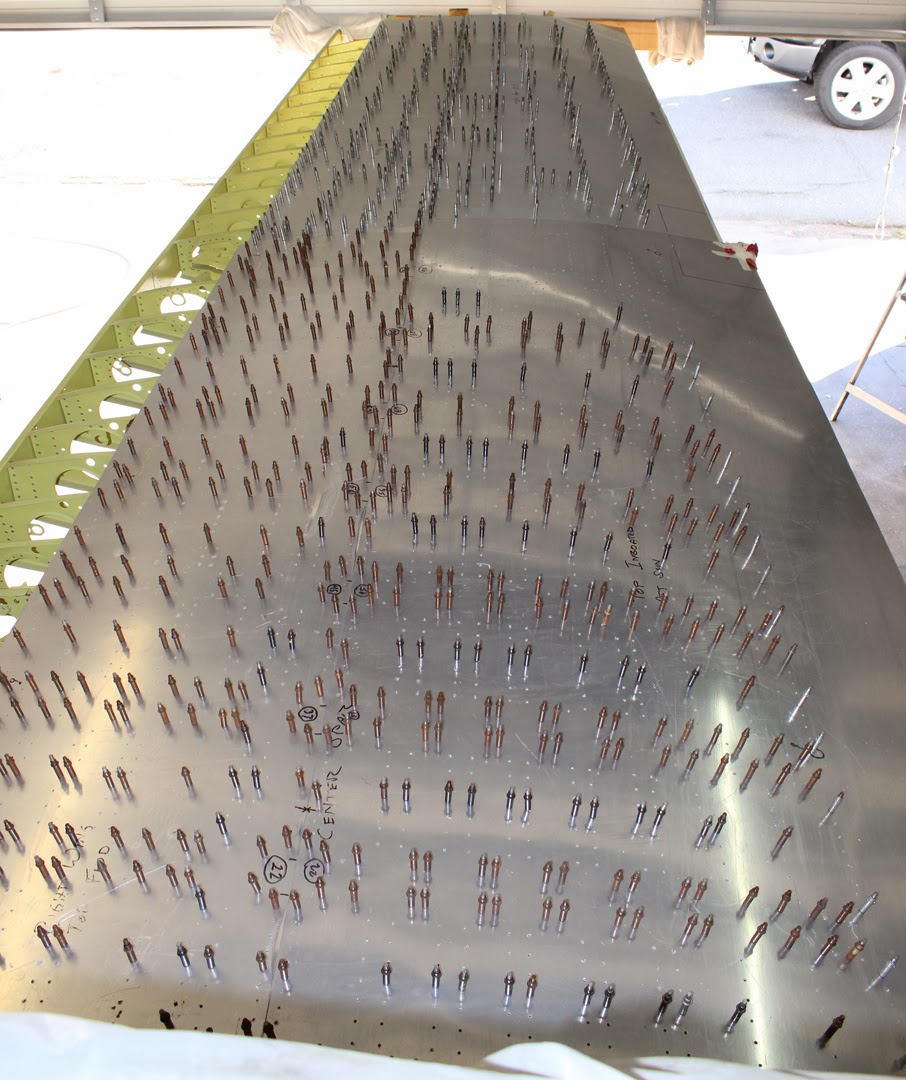 Time is getting closer for both wings to come off the center section and go into the permanent wing fixture for final drilling and riveting.  At that time we will rotate the fuselages and center section on their main gear 90˚ to the right to start the attachment of both aft fuselage extensions and horizontal stabilizer.

Systems (Canopies and Coolant Tubes)
Weezie and I have completed both cockpit emergency canopy jettison systems.  There must be a mile of cables and pulleys for both of those systems to work, and very precise set-up measurements to follow to assure that each canopy truck releases simultaneously. Tim has completed the final tightening and clamping of all forward coolant tubing in both cockpits. 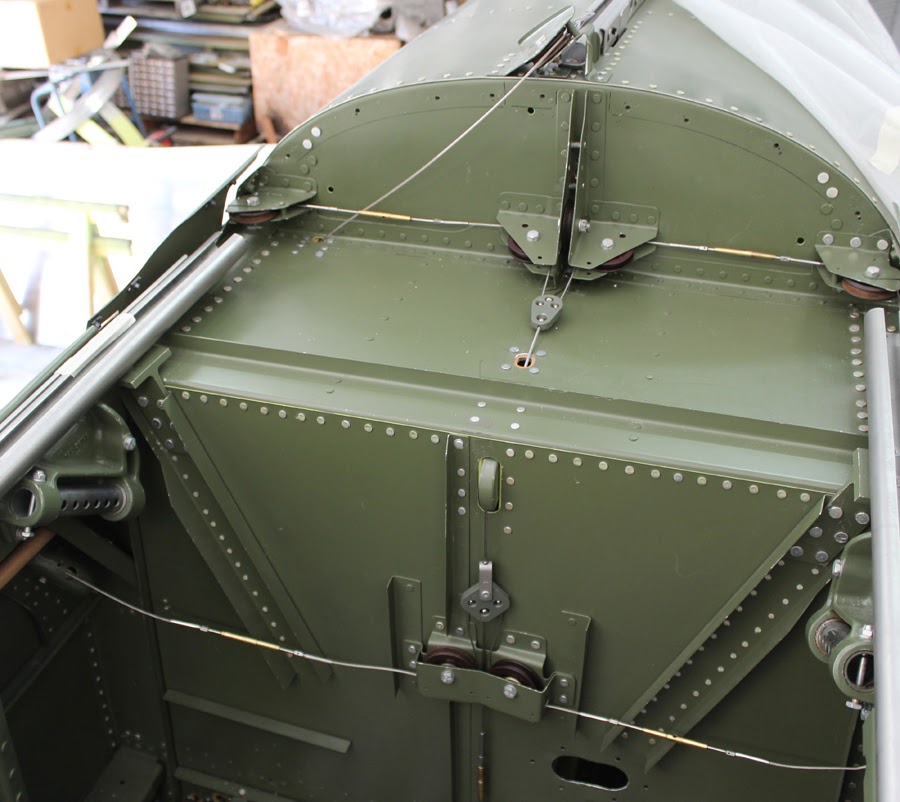 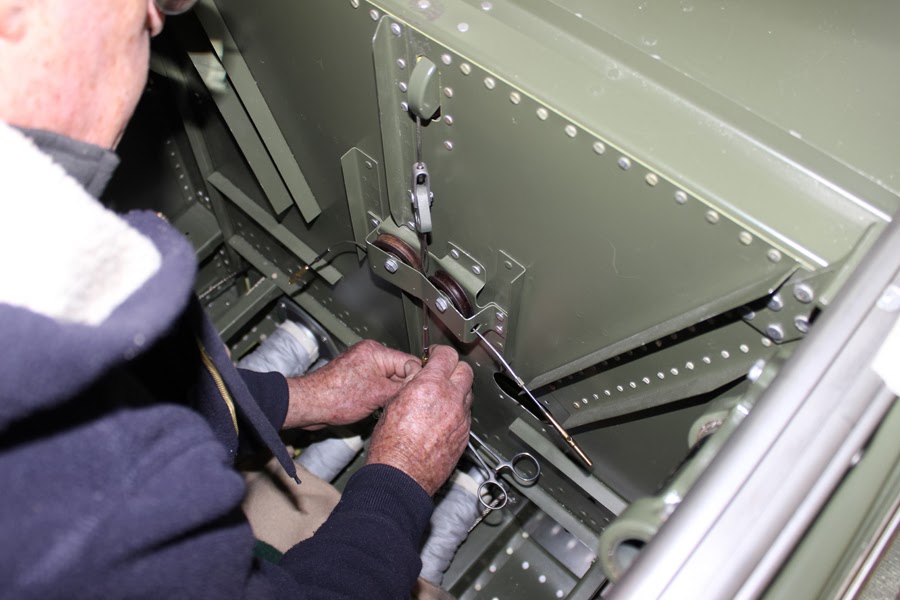 During the Alaska crash recovery in 2008, I stumbled over the burned remains of the right-hand quadrant.  Most of the aluminum parts were burned beyond recognition, but the key steel parts, arms, bushings and shafts survived. There are many changes between the right-hand and left-hand quadrants due to the different locations and through-firewall holes for the throttle and prop control rods. During the recovery, I looked at the throttle quadrant and made the decision that it was too damaged to load into the basket, but then had second thoughts a day later.  Thank goodness I decided to take it as some of these steel parts would have been very time consuming to duplicate.  We did Rockwell testing on the hardness of the steel parts to determine that the fire had not permanently damaged them, and they all passed. 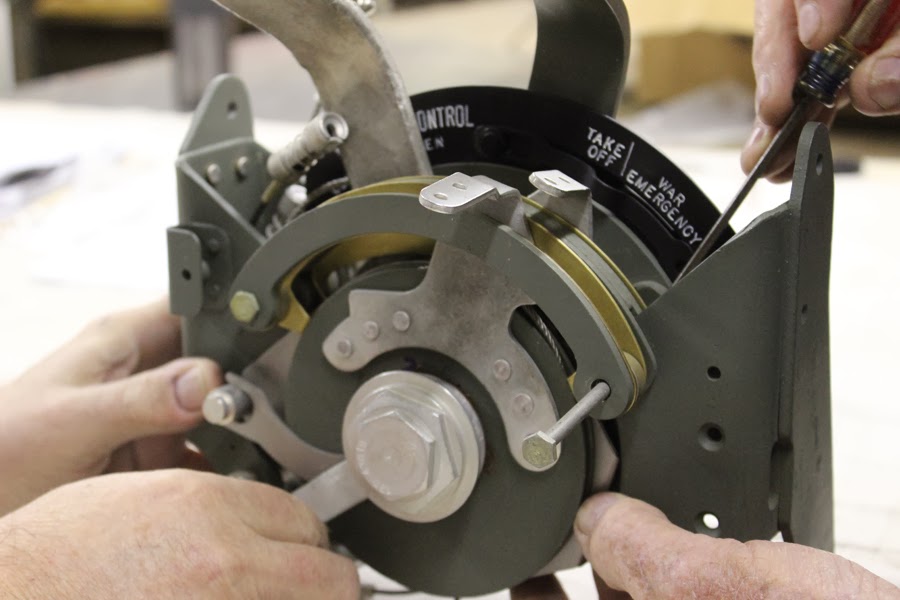 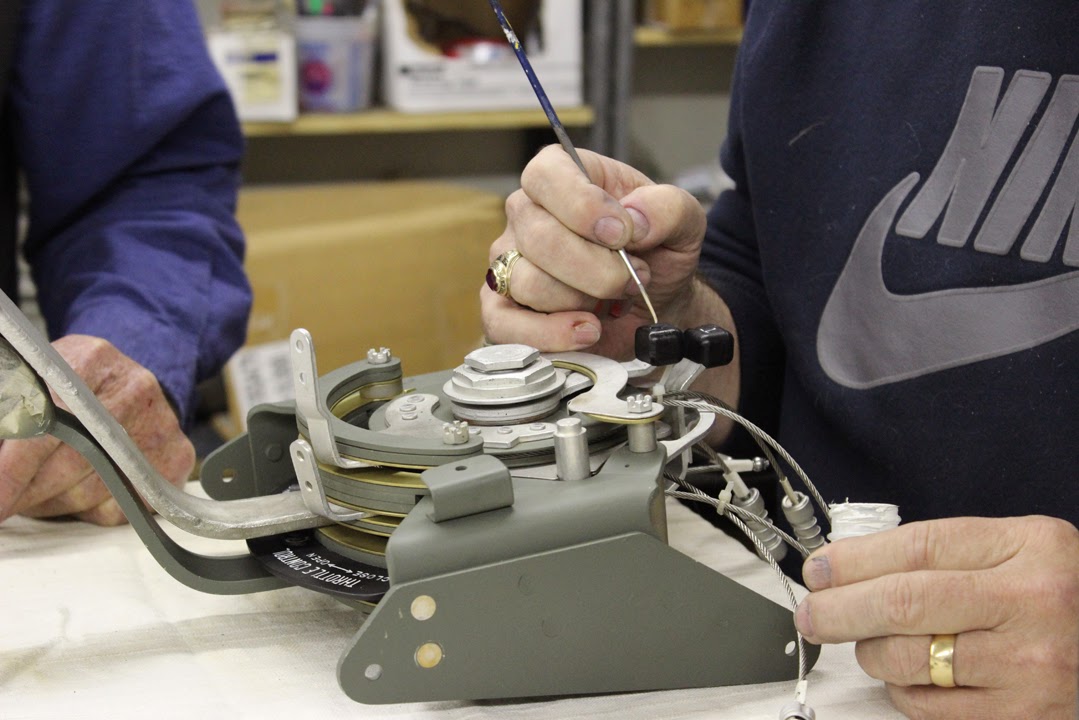 Machine Shops
One of our four sub-contract machine shops has been making magnificent progress on all of the remaining large and small parts that we need to complete our XP-82 project. There are still quite a number to finish, but the list is getting shorter each day.  Some of the key parts that were completed last month were the heat exchanger end caps, mounting rings, seat rail mounts and flap arms (that were pictured in last month’s news release).  With these parts completed, Martin Radiator is making good progress on our two heat exchangers.

Weezie, Tim and I have been installing the remaining countless small parts in the fuselages and center section that have been detailed and packed away for months in our storage container. 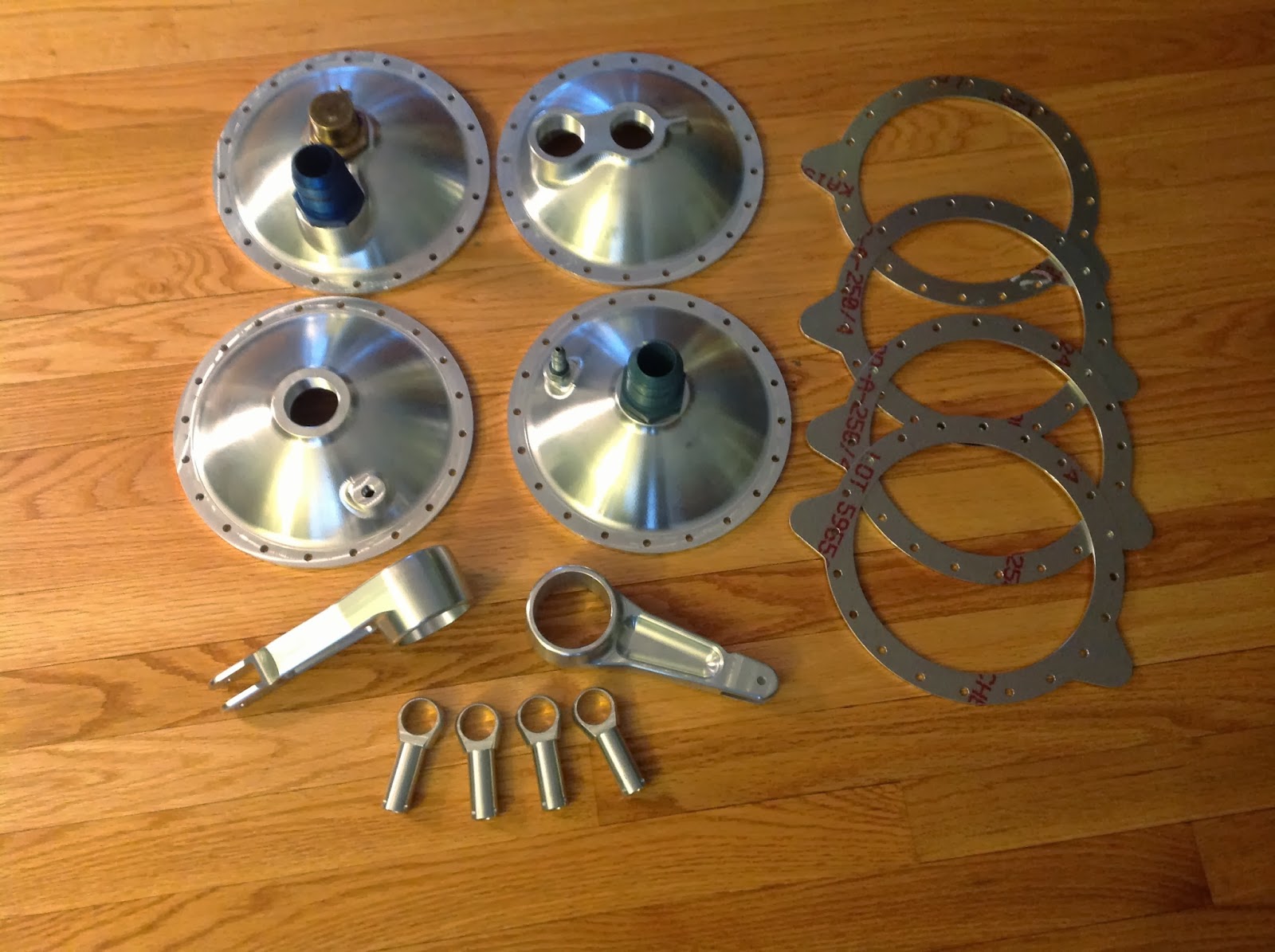 Bumps in the Road – Firewall Dishpans
The dishpan is a stainless pan similar to a small kitchen sink that mounts the oil tank into the steel firewall.

We had the two original XP-82 dishpans, one perfect and one severely damaged and an E model one that we got from the Colorado parts find that was identical except for 2” in vertical height. After I started making a modification to add these two vertical inches, I realized that when the instrument panel cover was off, the welded modification would be obvious and not acceptable. So the decision was made to press a new one.  A very difficult job, but it can be done.

Pictured is the heavy-wood frame around our undamaged original XP dishpan to accept the extremely high strength mold epoxy prior to it being poured in to make the mold. 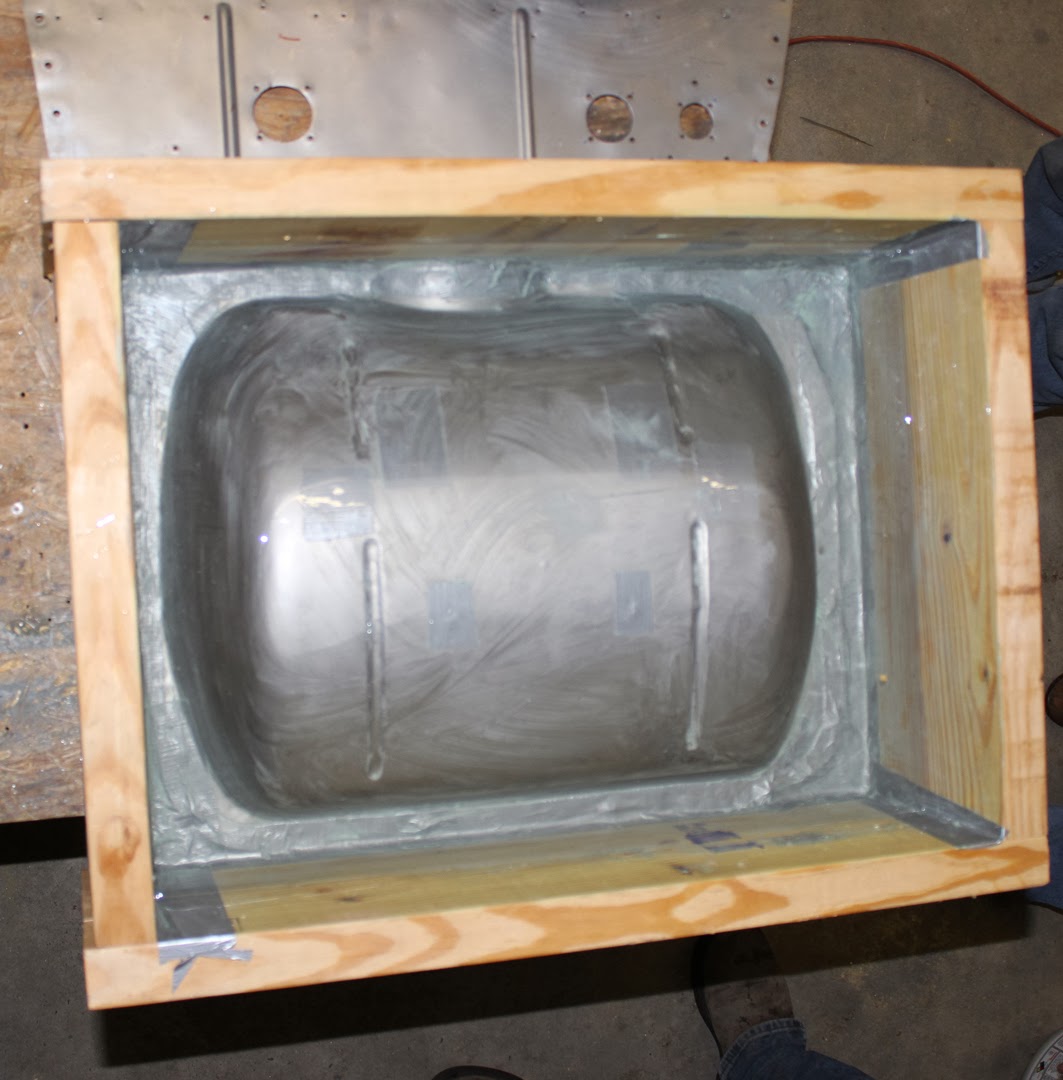 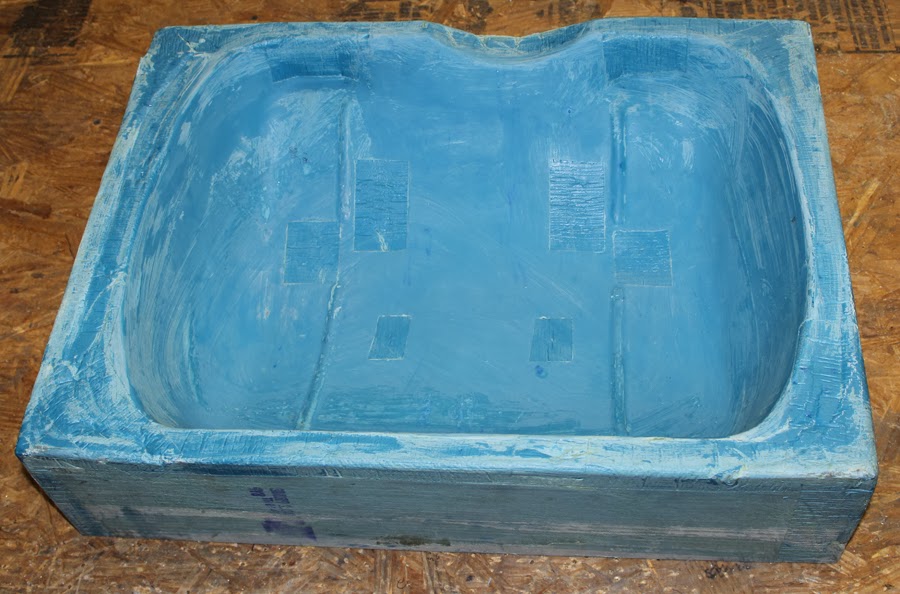