Fuselages
The team has been completing the hydraulic and instrumentation lines in the two fuselages. There is a massive amount of these hydraulic and instrumentation lines running through the center section up through the floors and to both instrument panels. Along with this multitude of aluminum tubing, the team has been synchronizing all of the levers on both throttle and propeller quadrants.  The installation of the static lines (neutral air pressure) has now been completed and the lines run to the three locations (two in the left and one in the right fuselage). 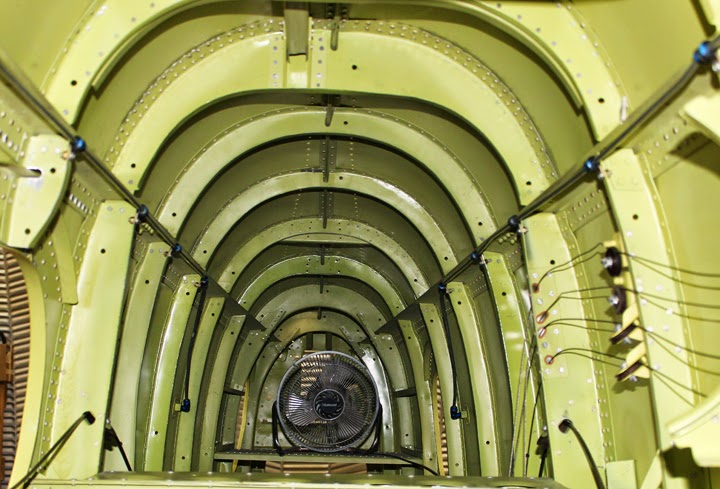 Static lines in the left-hand fuselage

Fuel pressure, oil pressure, manifold pressure, airspeed and static lines, along with the parking brake valve in the left-hand fuselage

The hydraulic lines under the pilot’s floorboards that run among the coolant tubes has been somewhat of an issue reinstalling them exactly the way the prototype had them.  In the production airplanes, they were routed in a much more logical order, not that our duplicating the original has caused any problems that we were not able to over come. 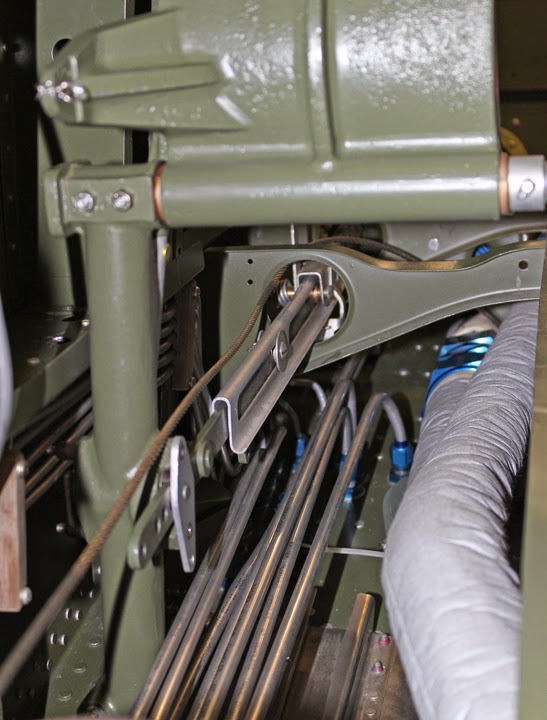 NAA had a unique way of installing flexing lines on both the two main retract cylinders and the two flap cylinders.  Instead of having a swivel joint, they just bent the hydraulic line(s) in a 360 or 720 degree flex circle, depending on the amount of flex that each cylinder would exert on the line. 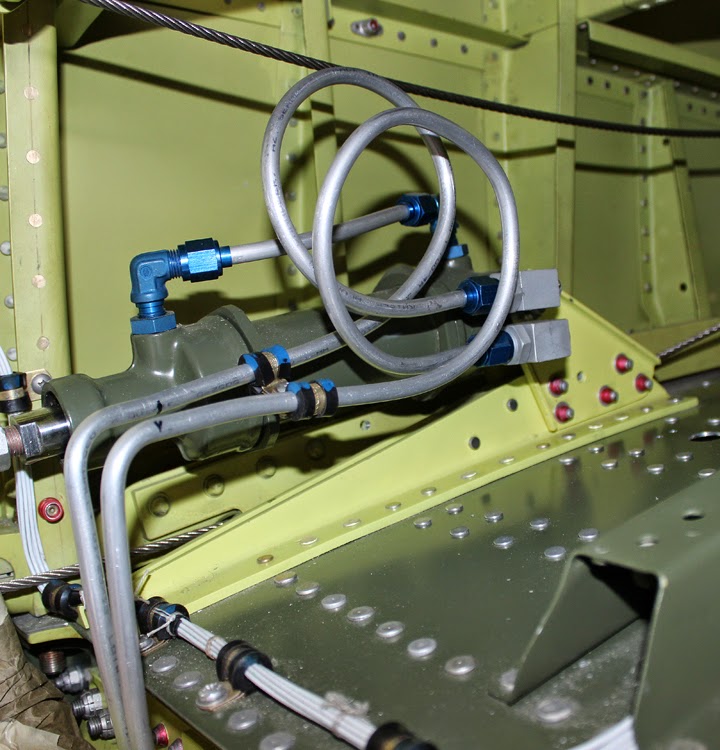 There have been comments on our website and/or Facebook as to why we are using AN fittings.  On our XP-82 and all subsequent production versions of the F-82s, North American used all AN fittings which replaced the Curtiss (A/C) fittings that were used on all previous North American products. 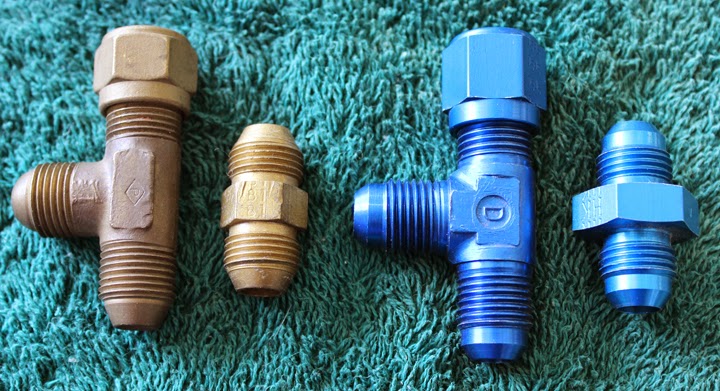 Curtiss on the left; AN on the right

On our aircraft, the prototype, North American had put in four static port holes in the fuselages to find the zero pressure area for the static ports. We have duplicated these test static holes for originality. 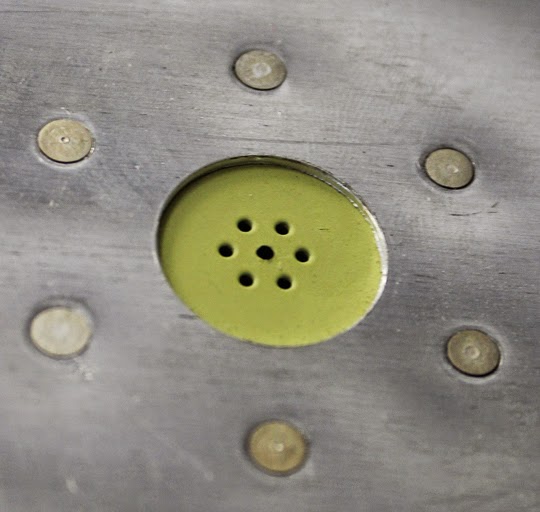 Canopies and Windshields
Both canopies are now totally finished and all of the canopy trucks are completed and ready to be installed.  The two glare shields (pilot and, co-pilot) and armor center windshield panels are now completed awaiting the forming of the side glasses. 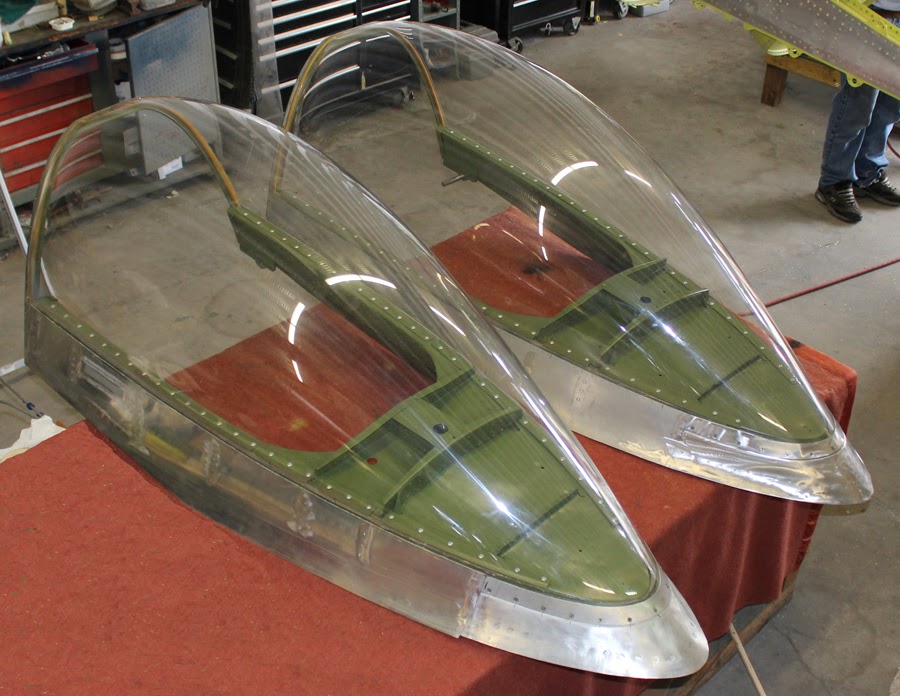 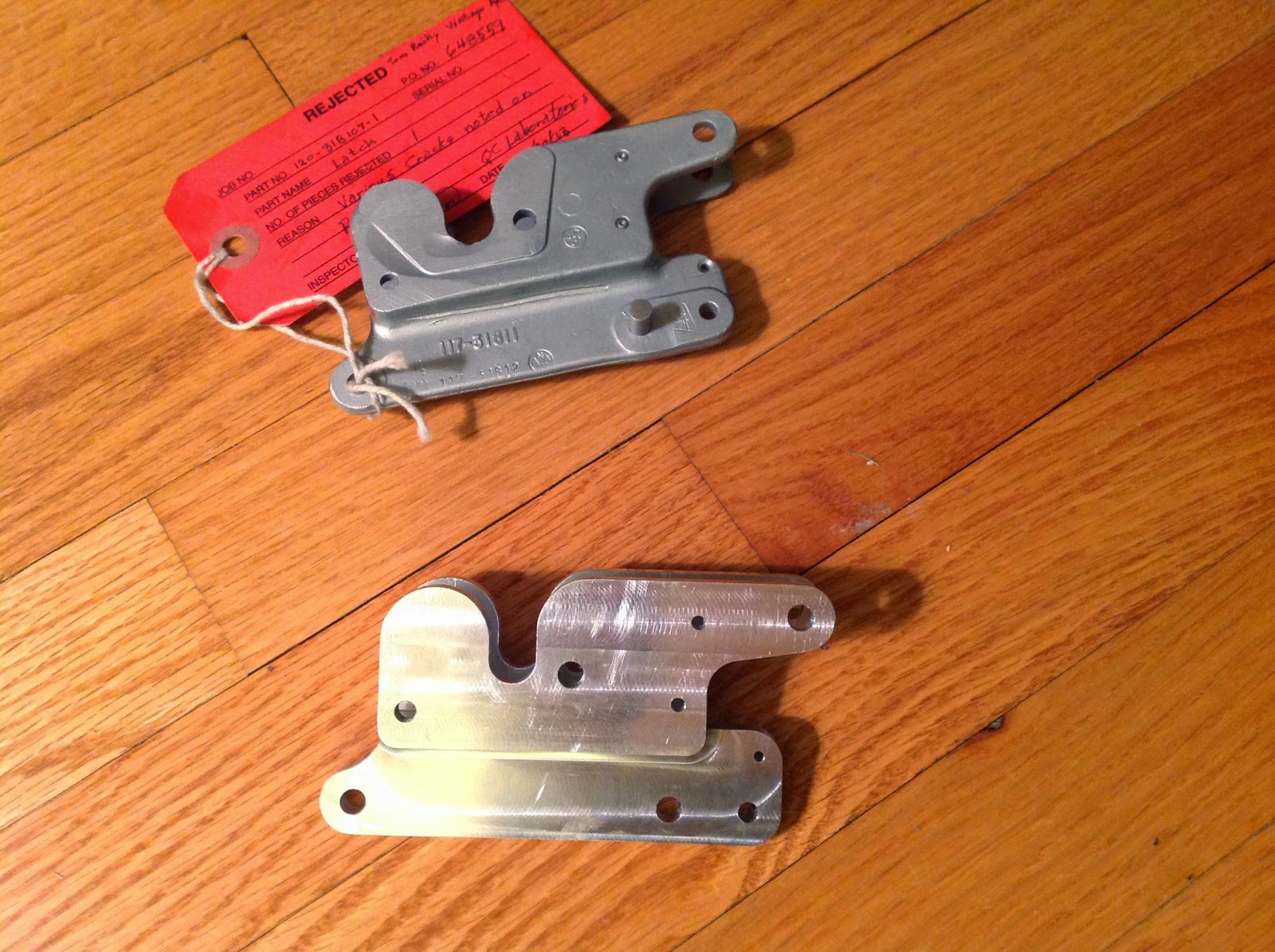 Wings
There has been just about a full team effort to complete our two wings. The team has completed the riveting of the leading edge as a subassembly and all of the aluminum lines are now installed.  These consist of electrical conduit tubes, aileron cable guidance tubes, pitot lines, drop tank pressure and return fuel feed tubes, boost pump, liquidometer, strobe, tip lights and pitot heat conduit tubes.  The bottom inboard skins on the right hand wing are now completed awaiting the closeout panels. 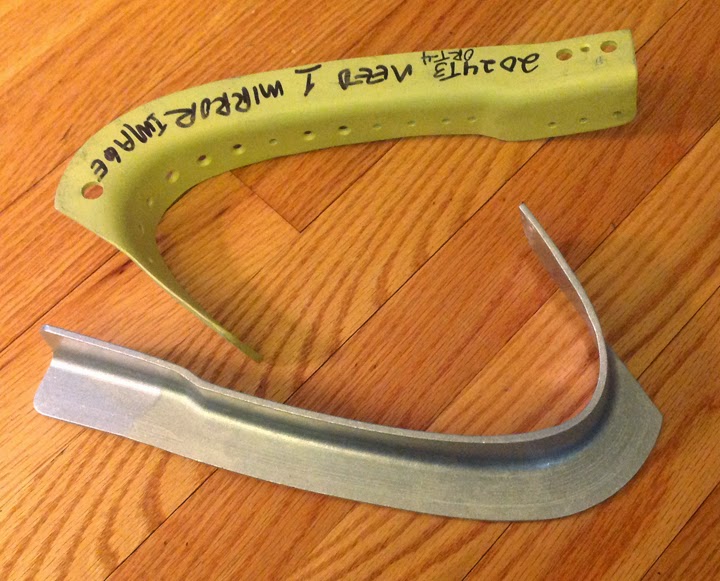 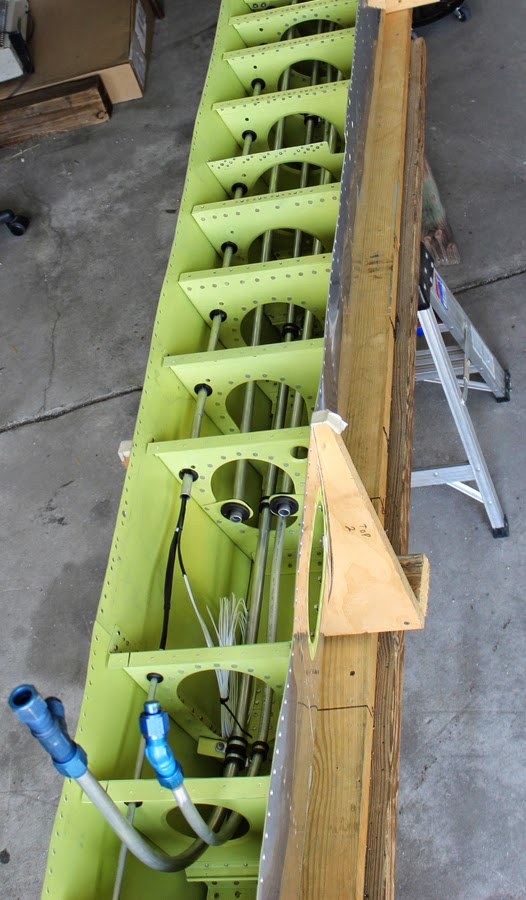 Aluminum tubes and wiring in the left-hand wing leading edge 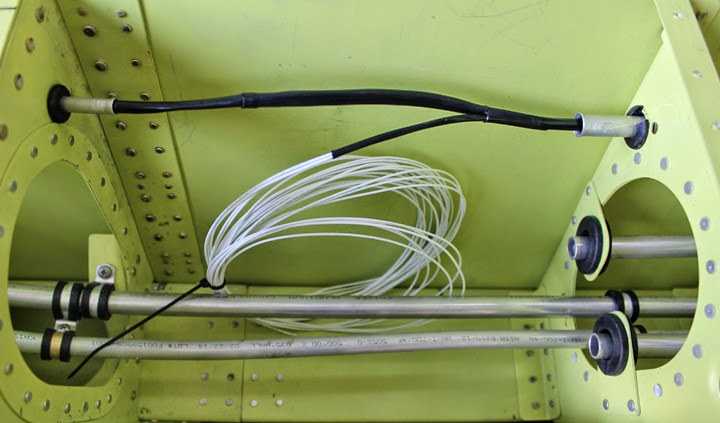 Subcontract Machine Shop
All of the aileron and flap hinges are well on their way to being completed, and the aileron sectors are also in process. The last large machine shop items to complete will be the four secondary engine mount structures. These large pieces are shaped like a T platform and bolt to the Merlin engine mount pads. These are not complicated pieces to make.

Firewall
The large exopy-cast tooling mold that we made a couple of months ago is now completed with its ½” steel welded containment structure to support the bottom and sides. When we press the stainless steel into the mold, we’ll apply over 200 tons of pressure.  With the ½” steel structure surrounding the epoxy mold, the press will not shatter the epoxy. 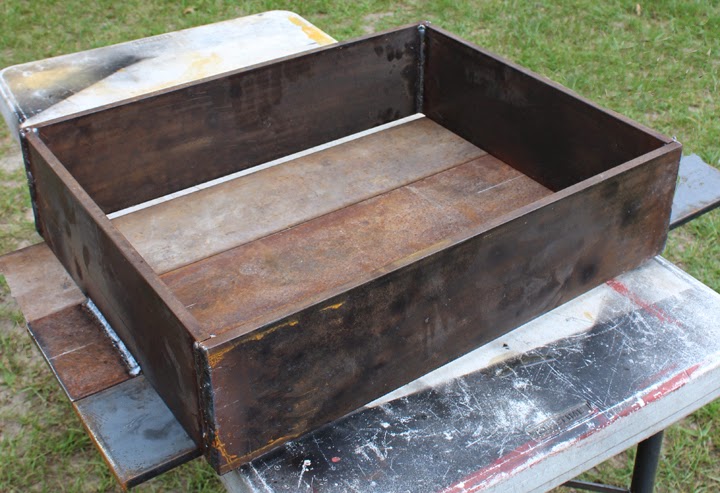 The Katz
After a relaxing two weeks at the beach, the Katz are back and trying to find a cool spot to hang out. 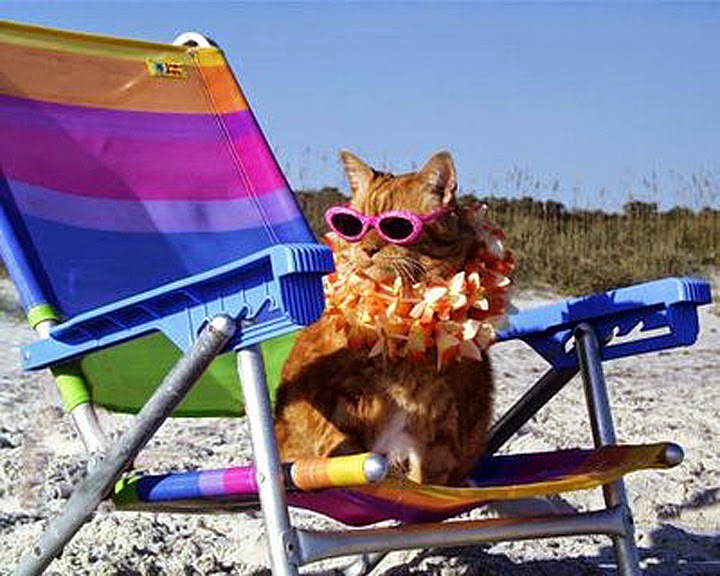 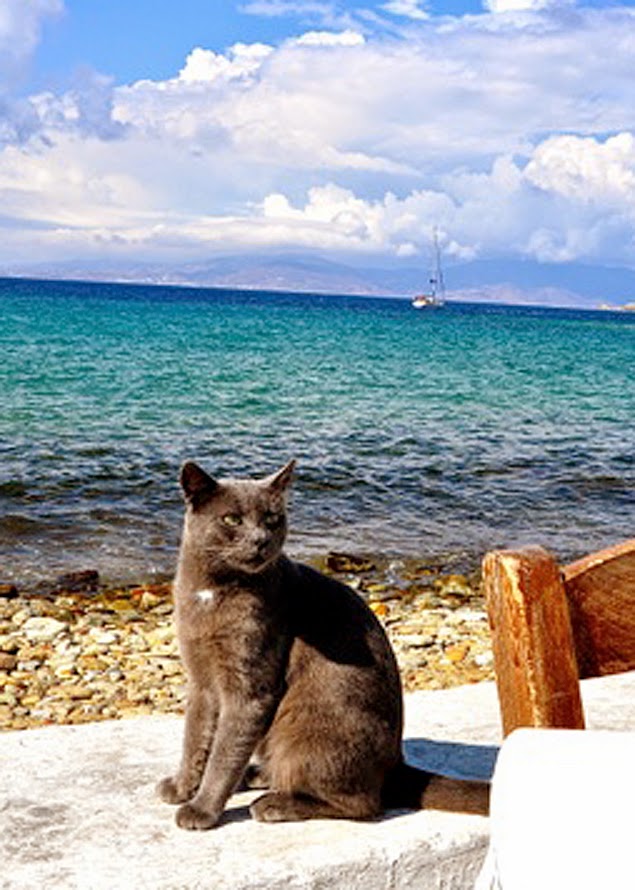