We finally see the light at the end of the tunnel and it’s not an oncoming train!

Center Section
The very difficult job of repairing and remanufacturing the leading edge gun ports is now completed. Most of these gun ports were severely damaged due to crashes and years of being pushed around by heavy equipment while in an Alaska scrap yard.

After a massive amount of rebending and straightening we were able to reweld the straightened cracked areas with the exact alloy stainless rods so that the weld matched the original alloy of each gun port, and the repaired areas are not visible. We could have easily manufactured all of these gun ports new, but I chose to attempt to keep as many of the original parts as possible.

Armament
All six replica aluminum .50 caliber machine guns are now mounted and aligned perfectly. We are installing original barrels and cooling jackets for authenticity so that when one looks into the barrel the rifling will be visible.

We had four volunteers work all 2400 rounds of .50 caliber ammunition. Each ammo tray holds 400 rounds for each gun. We decided to completely fill each tray (box) for authenticity with all the correct tip color-coded ammunition. We spoke to an original WWII armorer that loaded P/F82s in combat service and he advised us on the color pattern of the linked ammunitions. #1 Red Tip – Tracer, #2 Silver Tip – Armour-piercing Incendiary, #3 – Black Tip – Armour-piercing. #4 – Silver and #5 – Black. This order repeated for all 400 rounds in each of the six gun ammo trays. A very time consuming job, but now done. Thank you!

We even found hundreds of rounds of original inert date coded Milwaukee M-43 (1943) ammunition that we tip-painted and are installing for authenticity. 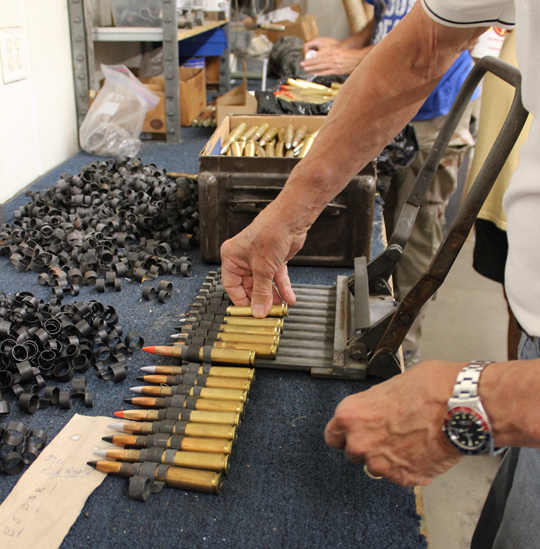 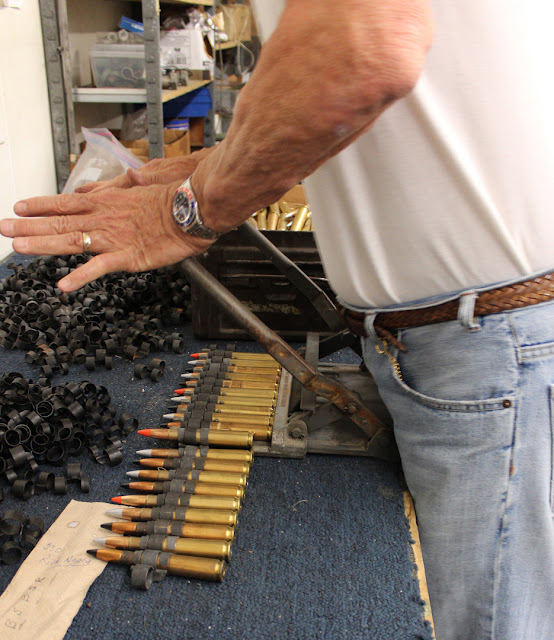 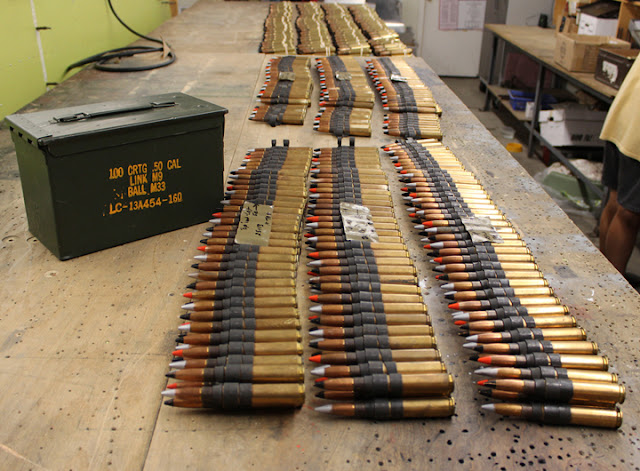 Lower Cowling
The team members are heavy into the last of the six engine cowls. These last two close out the bottom up to each firewall against the main gear doors. There is also structure that the center section leading edge and the fuselage-to-outboard-wing fairings attach to that had to be repaired and/or made new.

The four filtered-air-intake-formed panels have also been fit in each side of the forward lower cowlings. 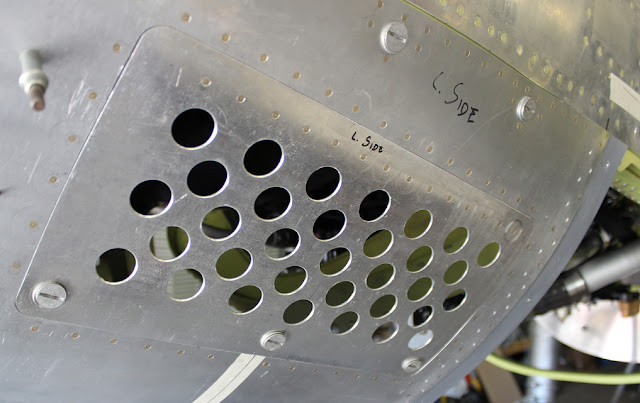 Engine/Carburetor Induction Trunks
These are two parts that are virtually identical to the P-51 Mustang. We purchased these induction trunks from Aero Trader in Chino, GA. They are magnificent pieces of workmanship that they made. The only change that needed to be done was to change the carb-air-temperature-door-actuating-rod lever from the left-hand side (P-51) to the right-hand side for the XP-82.

One of our subcontract machine shops completed the air diverter that mounts just under the prop spinner. This diverter controls the air temperature that passes through the induction trunk into the carburetor. The four positions are: Cold Ram Air, Hot Air (for carb icing), Half Hot Air and Filtered Air. Manufacturing this air diverter was an extremely difficult job, but it came out superb. Thank you! 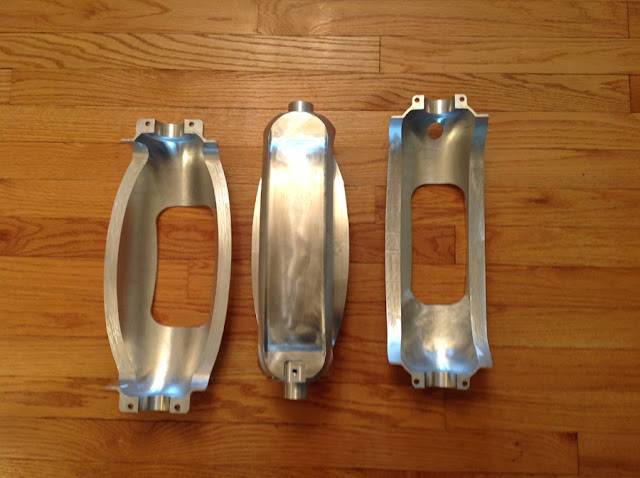 Coolant Tubes
The two venturi coolant tubes that control the Glycol flow (coolant) out of the supercharger intercooler(s) back to the heat exchanger(s) are now both completed and awaiting installation.

Both tail wheel assemblies and all of the retraction “A” frame mechanisms are now permanently installed. We are waiting for the last dozen or so steering mechanism parts from the machine shop to complete the steering hookups. 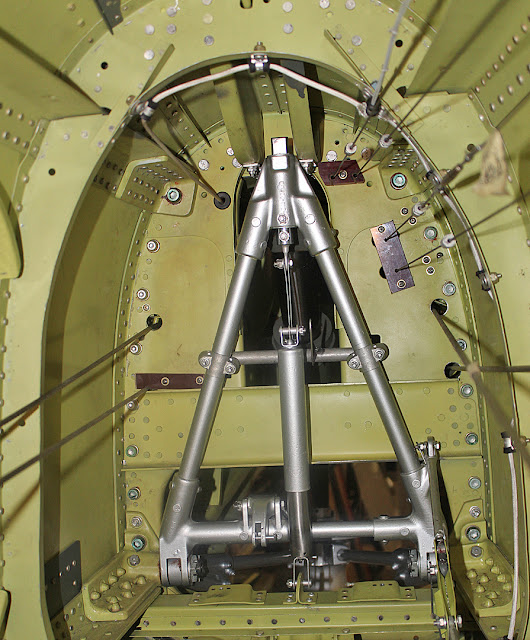 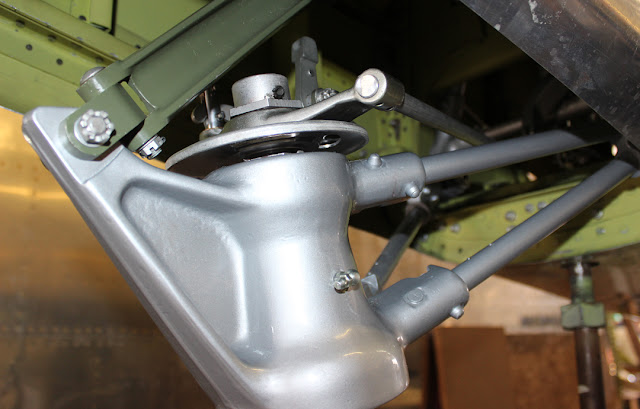 Tail wheel up and down position bungee locks 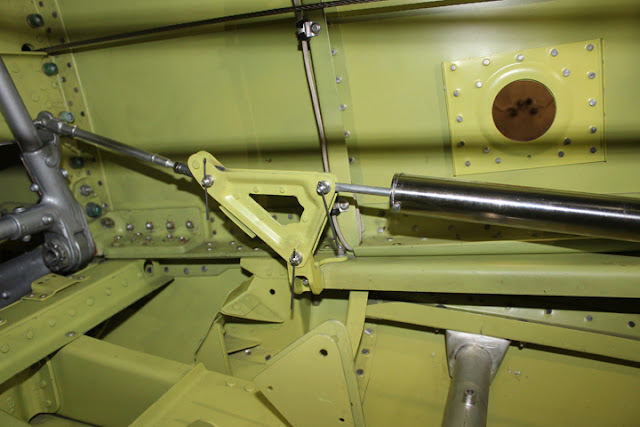 Part of the tail wheel assembly

Completion
The last major components to finish are the two inboard gear doors, the two brake calipers, a complete set of fuselage-to-wing and tail fairings; and countless other small jobs that are on the “to be completed” list.

“These bullets aren’t loaded, are they? You know I don’t like loud noises!” 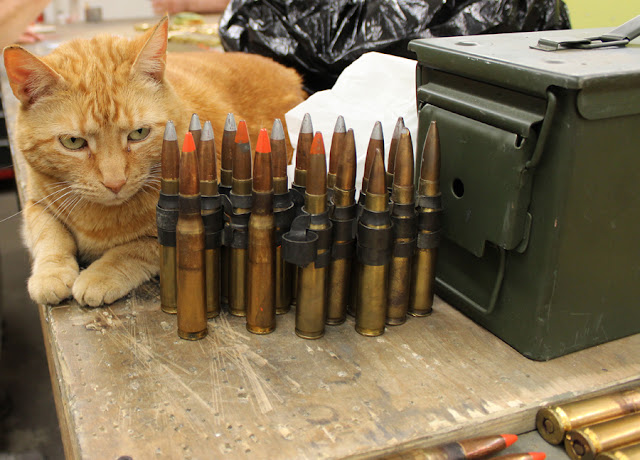