The light at the end of the tunnel is getting brighter!!

Wings
The last of the soldering of the Cannon plugs for the boost pumps,  liquidometers (fuel gauge senders), tip and strobe lights, pitot, remote compass, bomb arming and release and the main 26-pin plug that attaches to the matching center section plug during wing attach and/or removal is now completed on both wings.

We were able to purchase two NOS (new old stock) wing tips for P-51 “H” wings. The “H” model wings are the same as our XP-82 wings, so they should fit perfectly.

Within two months, the wings will be attached to the center section for fuel leakage testing and final rigging of ailerons and flaps. The last remaining item on the wings is the sewing of the fabric gap seals.

Center Section/Guns/Electrical
Four of the six Hughes ammunition feed motors and belting are now installed and attached to each .50 caliber gun. In the center section, we are down to only the six three-inch stainless steel machine gun blast tubes and two Hughes ammo drive motor housings. These blast tubes attach to the inside of the formed leading edge gun ports and back to the aft part of each cooling jacket.

All of the wiring is now completed to the boost pumps, fuel shut-off and cross-feed valves and liquidometers.

All of the wiring from the center section gear switches to each main and each tail gear is now run, awaiting final hookup and function tests during gear retractions.

Tail Gear
The two tail cable steering sectors are now attached to their vertical pivot tubes, awaiting the two top steering arms from one of our machine shops. When these two top arms arrive, we will finally be able to complete the last of the tail wheel steering and retract mechanisms. This leaves us only the four tail wheel doors and hinge brackets to complete. 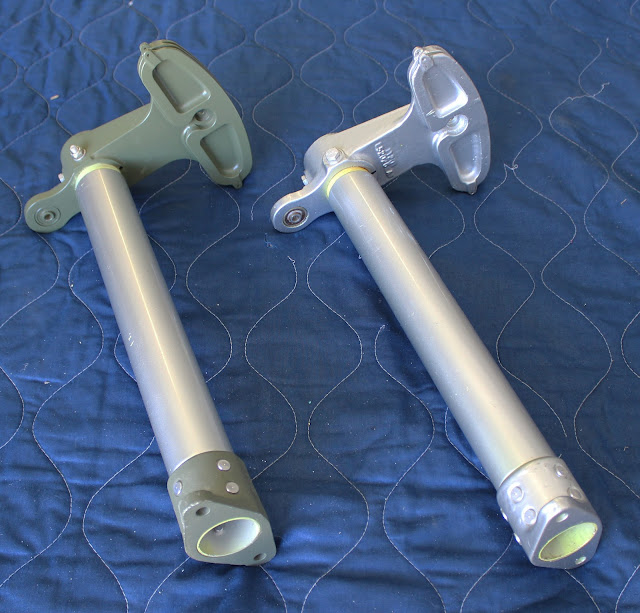 Firewall Forwards
We have temporarily installed one oil tank and one heat exchanger, both cellophane dust sealed in the left-hand engine compartment to prove the alignment and fit of all the oil and Gycol lines. All of these lines are now final fit and installed with the exception of one oil return line from each engine back to each heat exchanger (oil cooler). 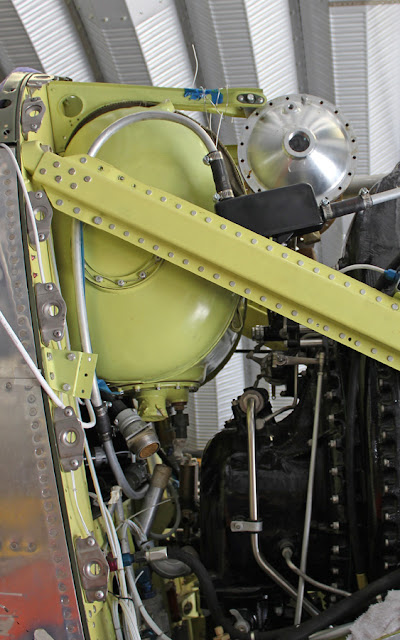 Oil Vent Lines
Both oil vent line assemblies have now been mandrel formed around the nose reduction case of each engine. Each oil vent exits out the side of each engine mount approximately the same place as the P-51. They will go to the professional welder next week for him to weld the four valve-cover adjoining-breather pipes to each tube. 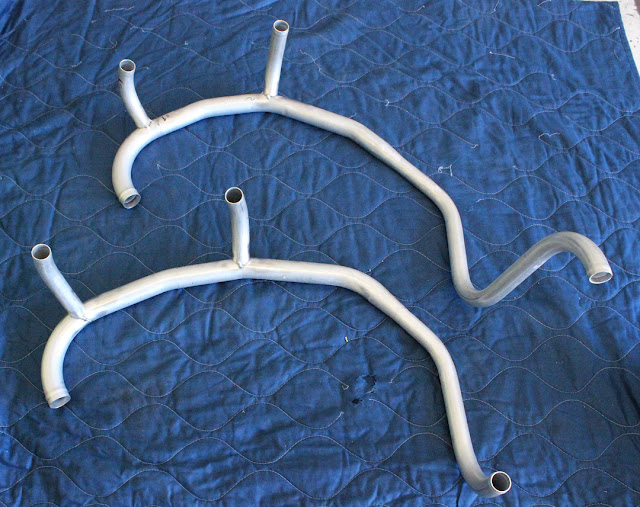 Exhaust Fairings
Two team members have been working two weeks completing the two exhaust fairings that we needed for the right-hand engine. Both of these have been pretty time consuming assemblies manufactured out of stainless steel. Each has a substantial number of reinforcement pressings, hat channels  and unique shapes to fit around each exhaust stack (six) on each side of the engine. Each stainless assembly, with all of its individual parts, had to be spot-welded together. We are down now to Yoder-hammer and English-wheel forming of each outside skin which, when completed, will be spot-welded to the inside of the fairing housing. 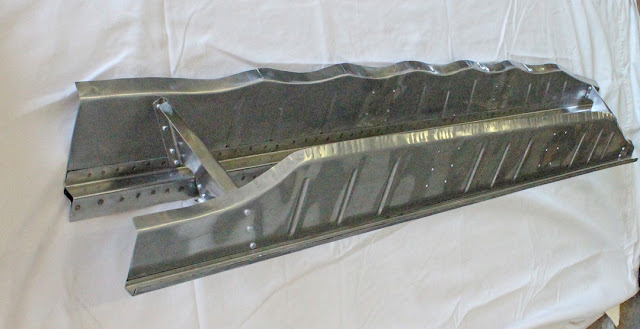 Cowling Dishpans (just aft of the spinner backing plate)
Both of these press-formed dishpans are now completed with the leather air seals that prevent an airflow entering from behind the prop spinner into each engine compartment. These leather seals tuck tightly around each vacuum pump and governor.  Each one of these dishpans also has a round leather bead that has been soft riveted around the outside circumference of each pan as a seal against the forward cowling rib. 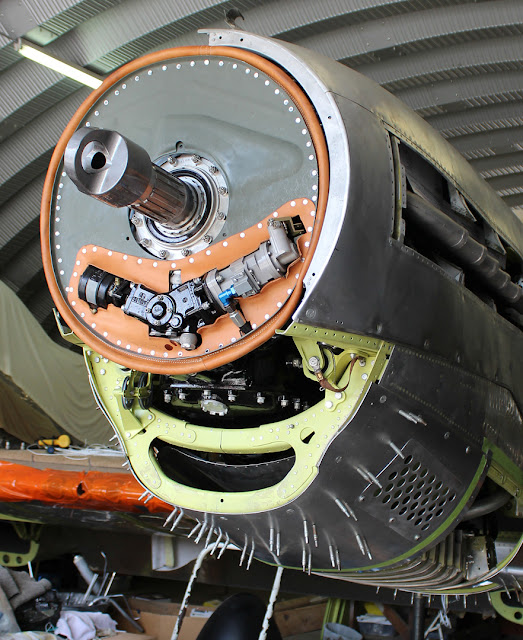 Propellers
The final assembly of our MT four-bladed propellers was completed by MT Propeller, DeLand, FL, their US base of operations.

Both of these propellers were shipped from Germany and delivered to us approximately four years ago. Due to federal requirements (Germany and the United States), the propeller boxes and contents, inside and out, had to be sprayed with some sort of anti-fungal chemical. A small amount of this spray chemical made it through a small section of the bubble wrap and sealing papers in a few places and created some small spots on the hubs. When we returned these propellers back to DeLand for final assembly a year ago, Gerd Muehlbauer, President, MT Propeller, looked at them and rejected the two hubs and the eight blades, boxed them up and shipped them back to Germany for complete disassembly, inspection and replating. Our hats are off to the outstanding quality control that MT Propeller insists with all of their propellers.

Both propellers were assembled by MT and trailered back to Douglas, GA, awaiting installation on our XP-82 engines within about two months. 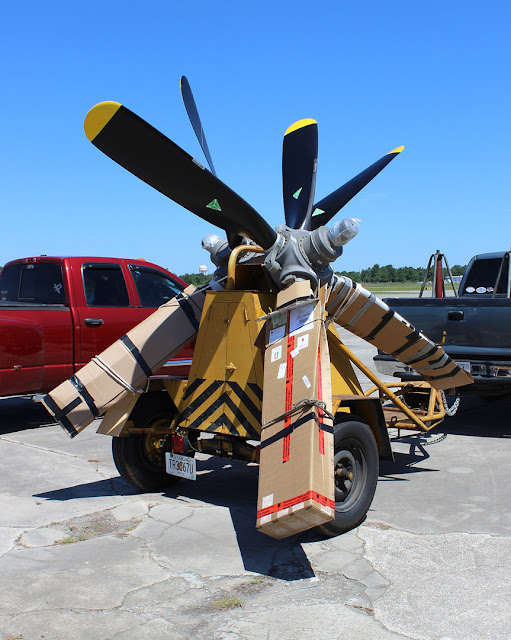 Original Radios
One of our employees, whose hobby is restoring WWII gun turrets and antique radios, has found almost all of the original XP-82 remotely mounted radios. All were brand new and in perfect condition, including their wiring plugs which are items that are impossible to find. We are still missing one transmitter/receiver unit and one interphone amplifier to complete our original radio/avionics package.

This magnificent find of these original radios will add to the originality and ensure that our XP-82 goes back together as original as it was when it came out of the factory and first flew on 15 April 1945. 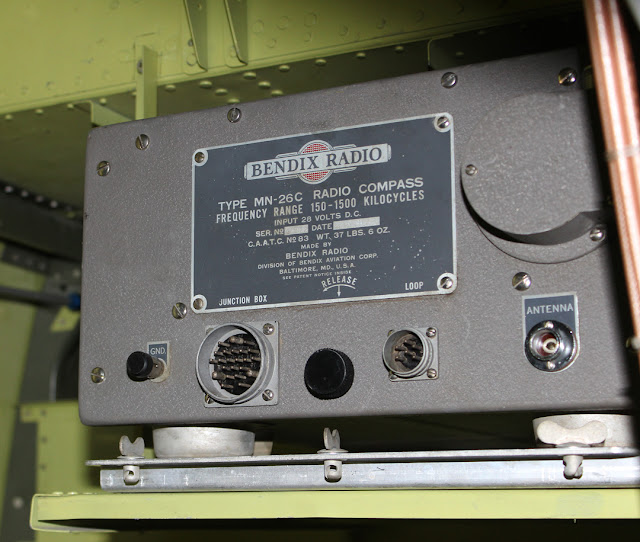 Radio Compass in the left-hand fuselage 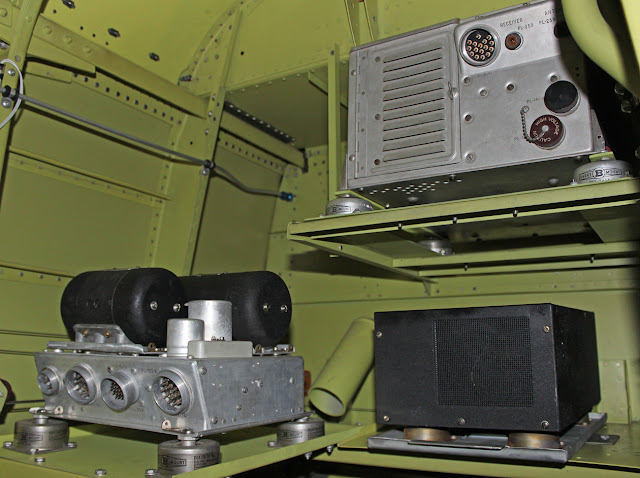 Radios installed in the right-hand fuselage

A special thanks to Dennis Carr of AeroTape, Orlando, FL, for contributing rolls of special masking and protective tapes, and many gallons of a vegetable-based aircraft cleaning fluid. 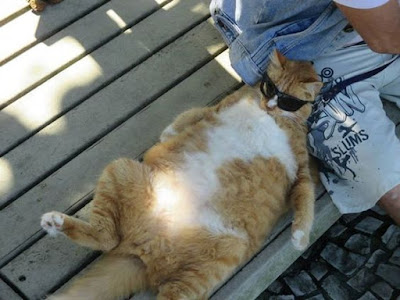 Allison decided to hang at the beach to get out of the heat. 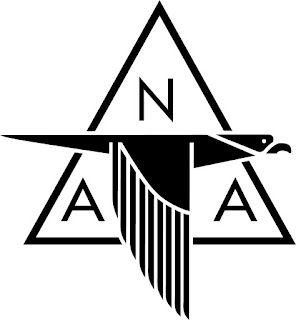