It has been quite a month!

Tail Sections
For the majority of the past month, most of the crew has been on the final alignment and attachment of the aft fuselage extensions, verticals and horizontal stabilizer. The initial lineup when perfectly, but the microscopic adjustments down to .010 (ten-thousandths - 3 times the thickness of a cellophane  plastic sheet) seemed to have taken forever, but everything is now permanently aligned and attached, and the team has started the final fitting and riveting of the side skins. 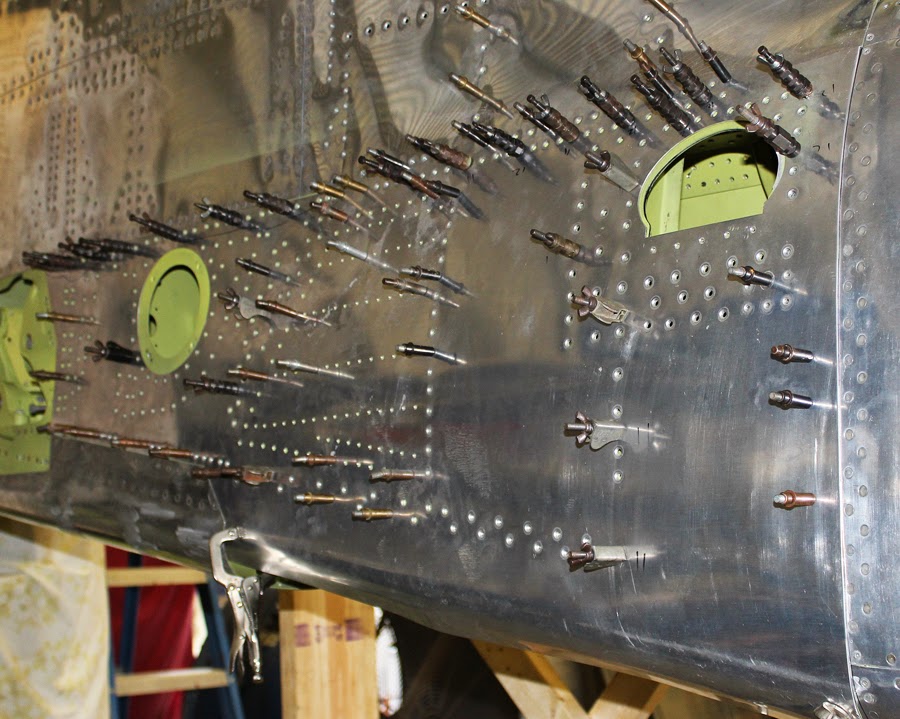 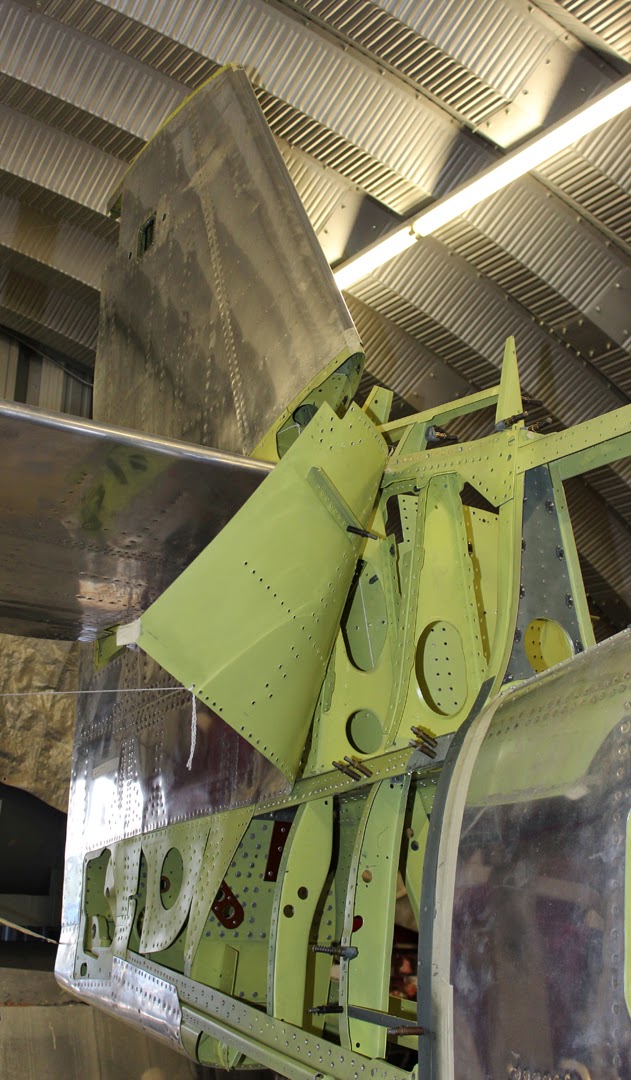 The pulley brackets for all of the primary controls (elevator and rudder), and secondary (trims) are now completed and awaiting final installation along with the four side skins. All four of the elevator and rudder mounting castings and associated matching bellcranks have been final fitted. 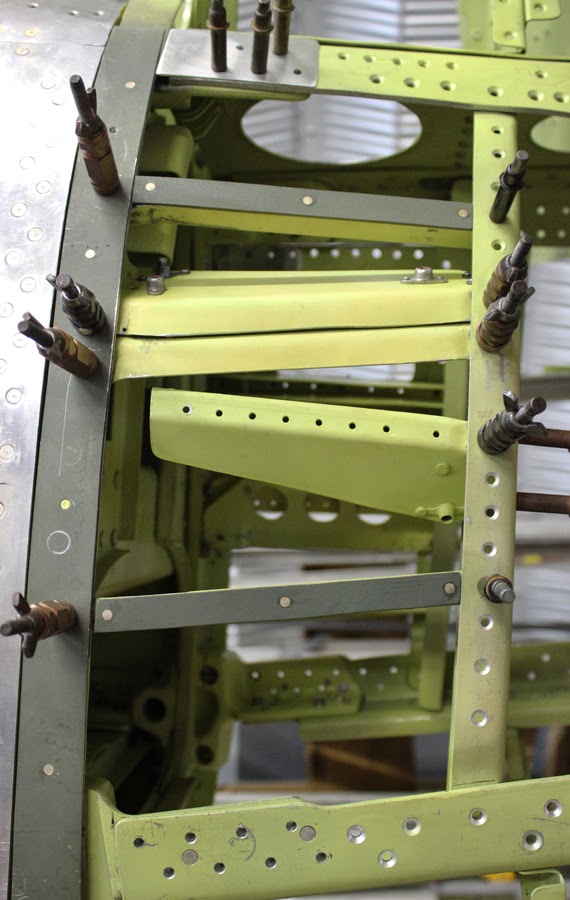 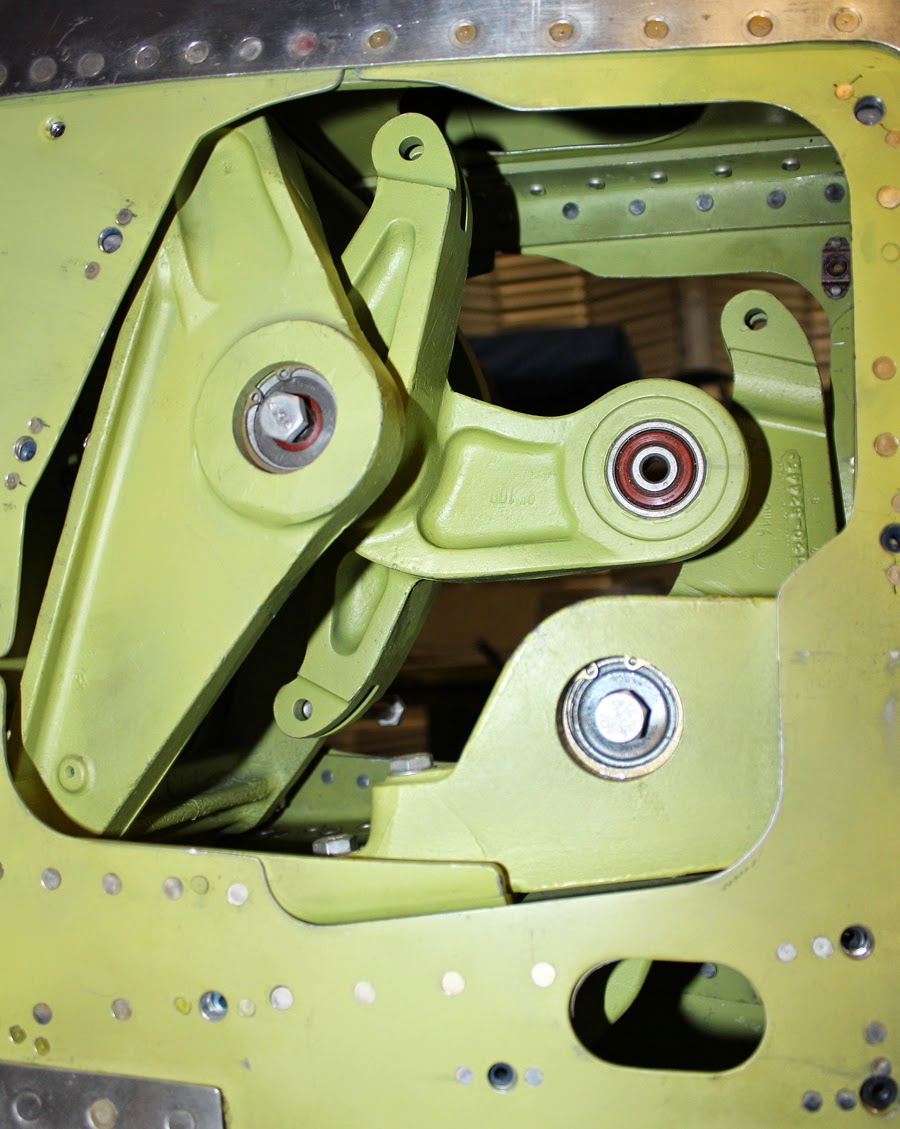 Both dorsal fins are well on their way to completion. We had to make a few ribs and attachment parts, but the job of alignment and installation of the dorsals went smoothly.

Two other team members have been restoring the multitude of tail wheel gear parts. One cannot believe how many moving parts are in our XP-82’s tail wheels: retraction, extension, steering, oleo, tail door opening and closing, etc. Virtually all the parts needed attention and overhaul to bring them back up to airworthy condition. 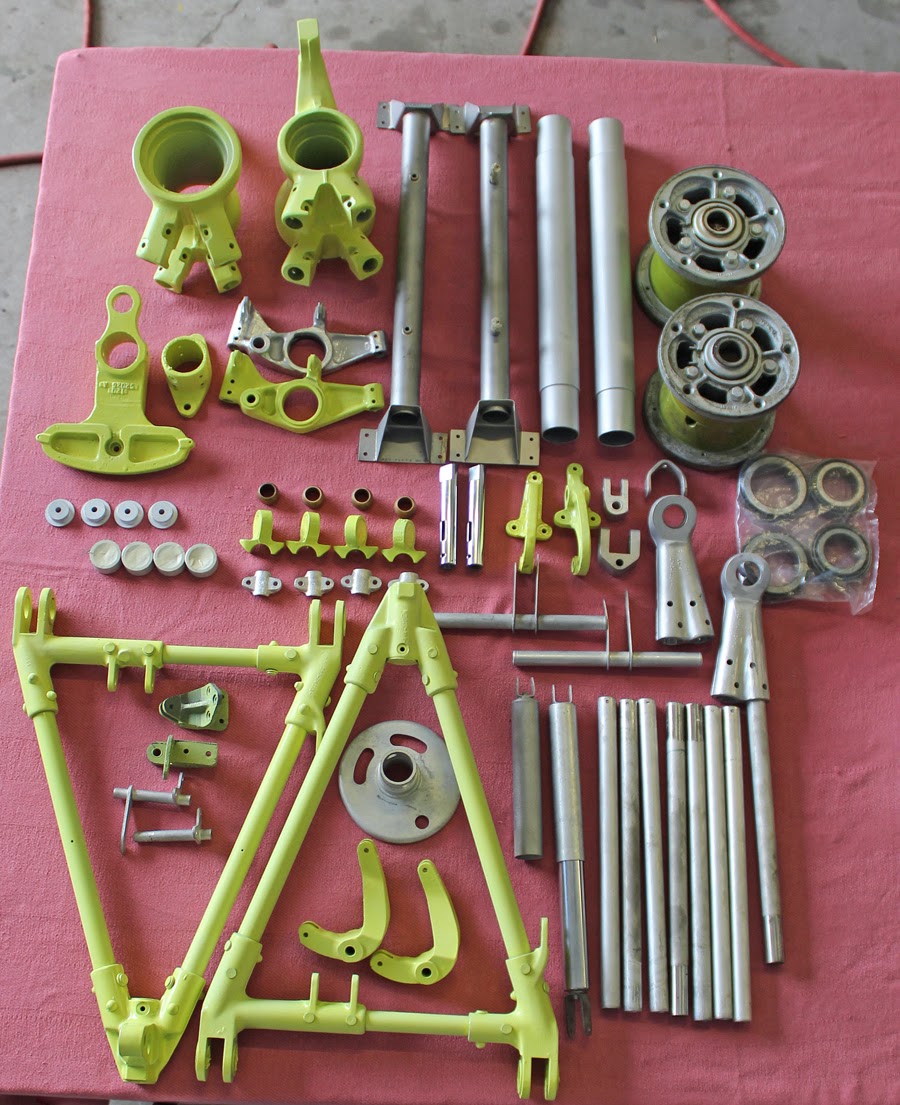 Just some of the tail gear parts 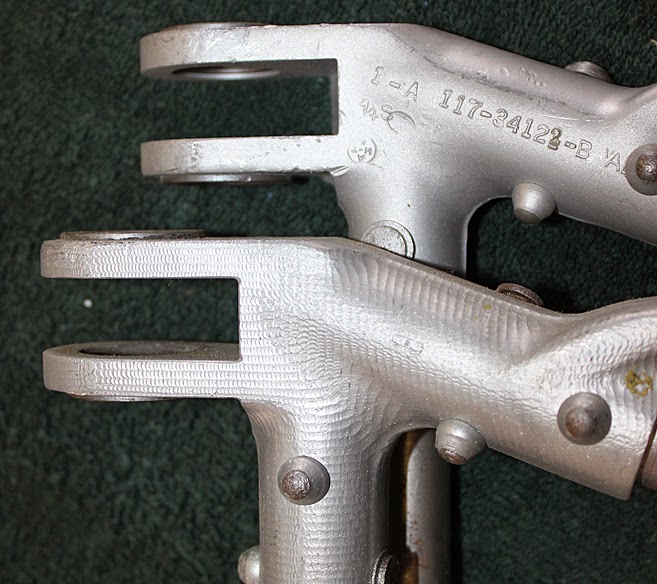 Canopies, Trucks, Opening/Closing Cranks, Windshield Side Glasses
Both hand cranks are now completed and are being installed, and both canopies are ready for installation. All four windshield side glasses are nearing completion. We should have them within a week for routing, trimming and final installation. Even though they look similar to the P-51 series, these canopies and windshield glasses are nowhere close in shape or dimension. 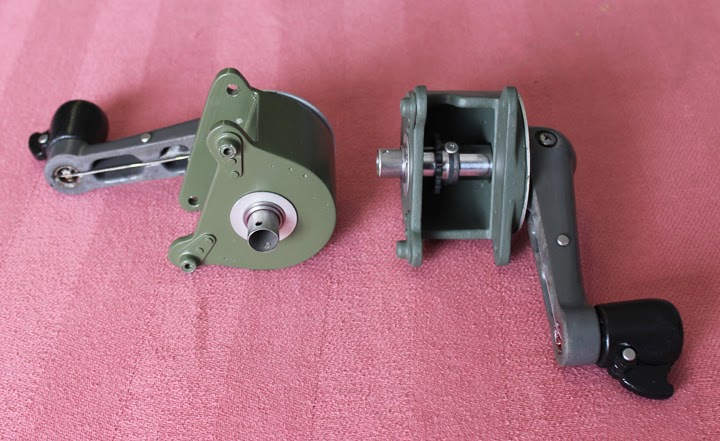 Outboard Wings
The work on both outboard wings has slowed as we are waiting for the final aileron and flap hinge points for final completion and close-out of the four bottom rear skins.  The remainder of these parts are due here within the next two weeks to coincide with the team completing the riveting of the tail sections. 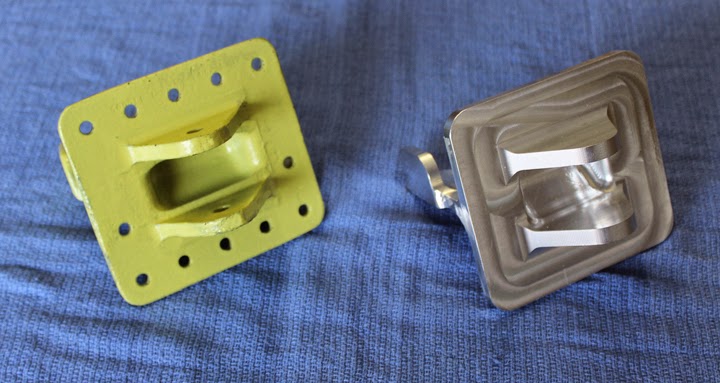 Main Gear Door Opening/Closing Hook Mechanisms
We have received the final forgings for the main inboard gear doors. These parts hold the multitude of push/pull rods that control the positive lock/unlock hooks, which keep the doors securely closed during flight.  They all will be installed this coming month.  Thanks, John, Advanced Manufacturing Concepts. 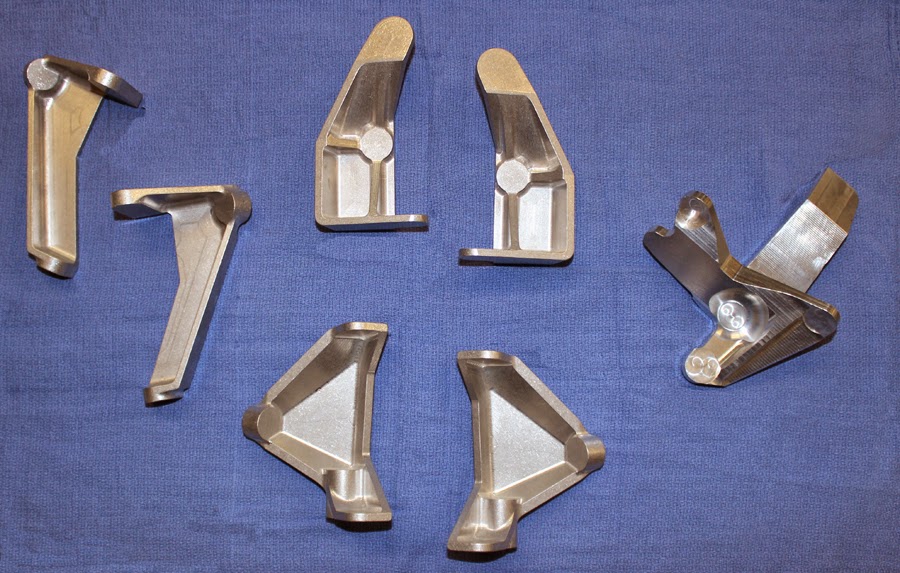 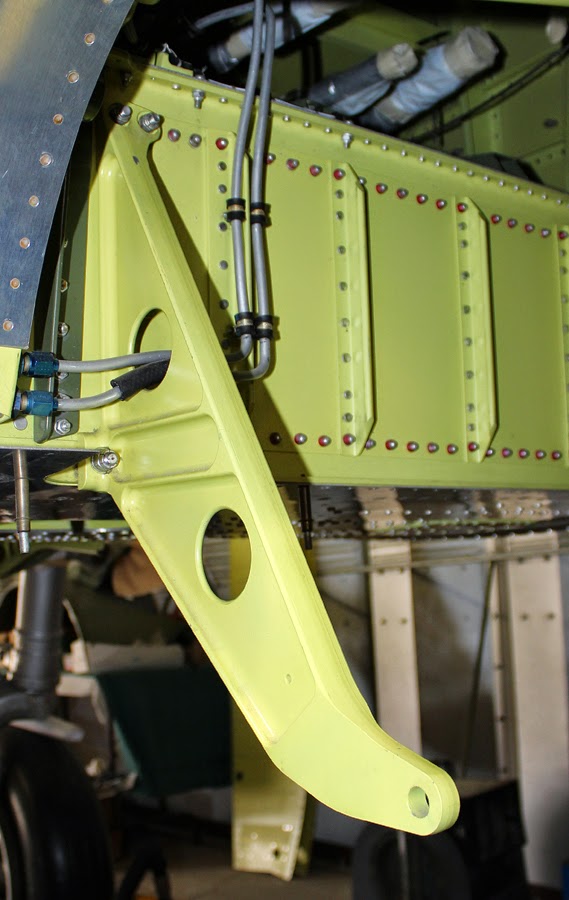 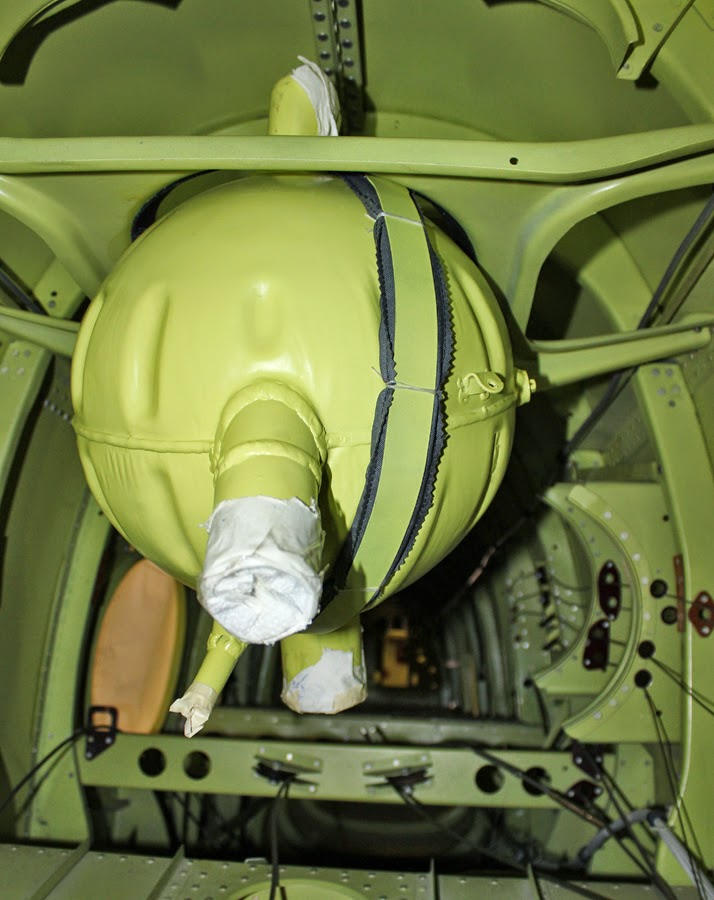 Gun Mounts
The six aluminum gun mounts that will be bolted into the center section are now completed and awaiting installation.  Thanks, Vic, Peres Pattern. 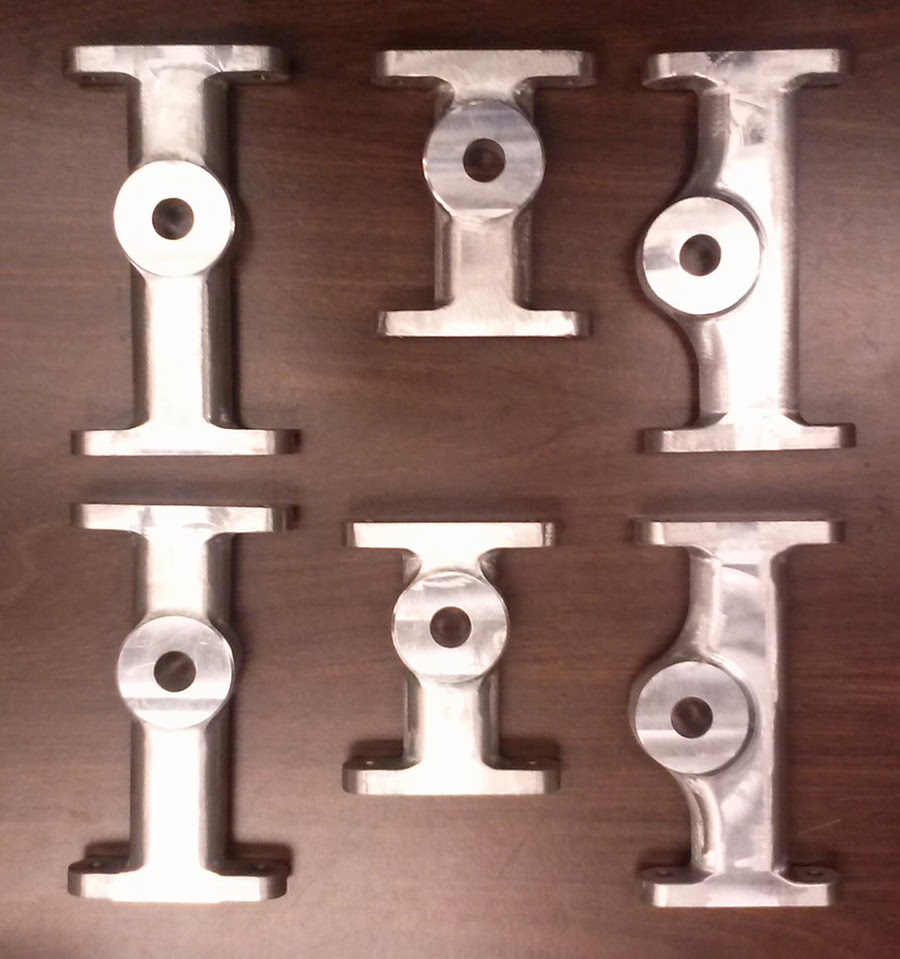 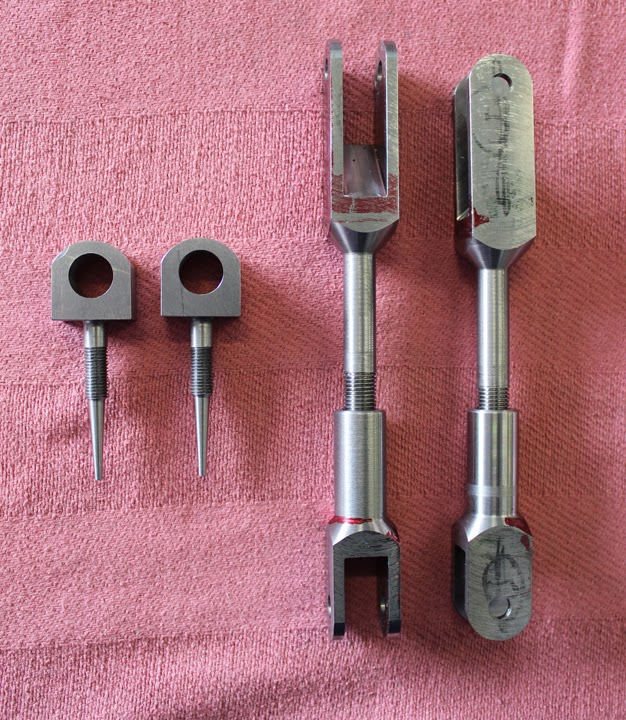 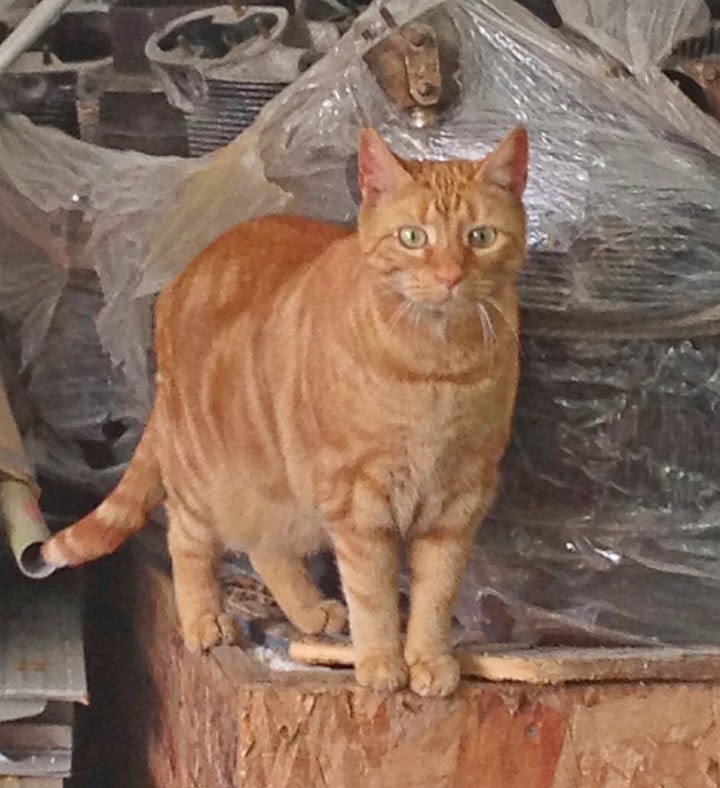 "What do you mean you again forgot to get my treats!"
- Allison 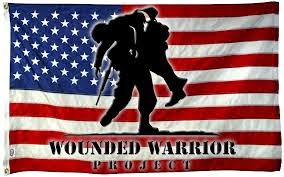 Posted by XP-82 Twin Mustang Restoration Project at 9:17 AM