Once again, we had a fabulous month
with lots of progress.

Wing Trailing Edges
The final trimming of the upper and lower skins on both wing trailing edges is now completed. These trailing edges hold extruded stiffeners that act as a secondary gap seal for the ailerons. The primary gap seal is a full-length sewn rectangular canvas panel that attaches to both the trailing edge spar, and the leading edge on each aileron. This gap seal stops the airflow from the lower airfoil of the wing up through the leading edge of the aileron. If allowed this airflow would disturb the effectiveness of the aileron.  The wing crew has these trailing edge extrusions completely fit on the left-hand wing, and the fitting is almost completed on the right-hand wing. 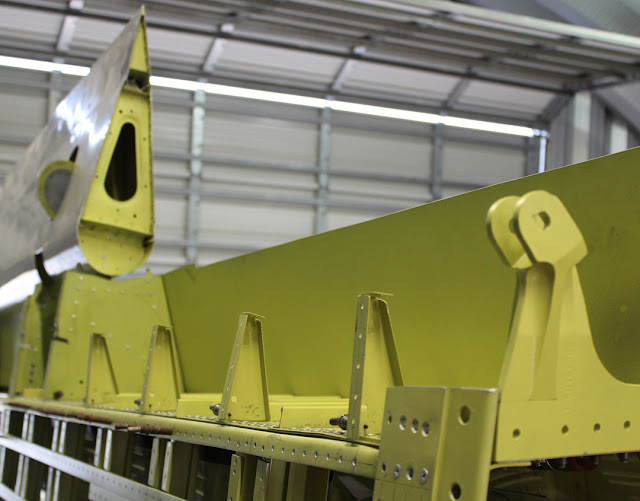 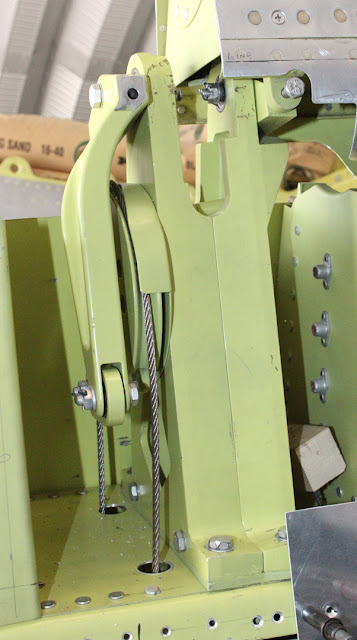 Fuel Tanks, Vent Lines, and Fuel Tank Liners
The fuel tanks have been delivered. A beautiful job from Eagle River Custom Shop located in Eagle River, WI.  They fit like a glove (not to be confused with O.J. Simpson’s leather glove). The final fitting of the fuel tank liners involves matching all of their multiple access holes for the fuel pumps, liquidometers, vent lines, fuel feed lines to the existing holes in the center section and wings.

The fuel vent lines in both outboard wing bays are complete and the vent lines in the center section fuel tank bays will be installed when the final mandrel bending is completed this July. 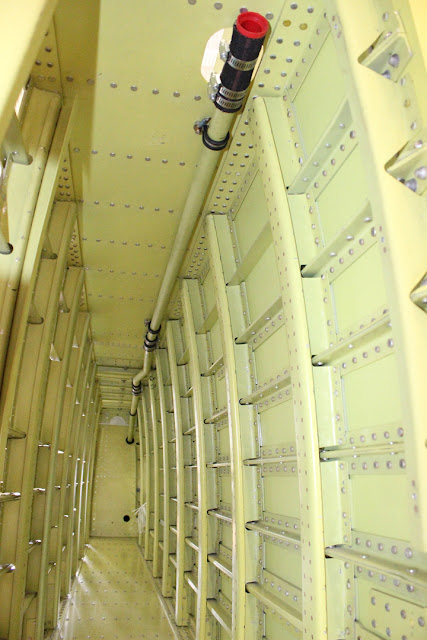 Tail Wheel Retract and Steering Mechanisms
Two of our subcontract machine shops have been busy making numerous tail wheel assembly parts that were not salvageable.  They still have about 25 part numbers still to go, and when those parts are delivered, we can start on the final assembly of both tail wheel retract assemblies. 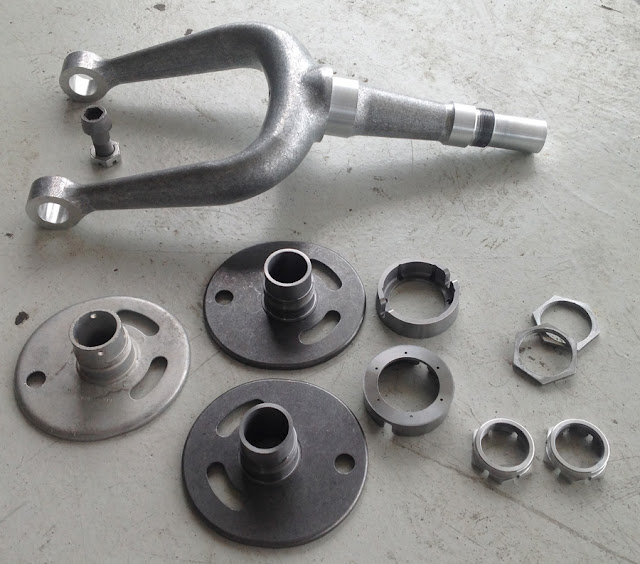 The sheet metal crew have completed both coolant exit doors and have fit them into the tunnels. As mentioned in past news releases, these exit doors, even though they appeared very simple to repair and duplicate, had caused a substantial amount of problems due to numerous skins having compound bends in three different directions.  We have installed the right-hand radiator. 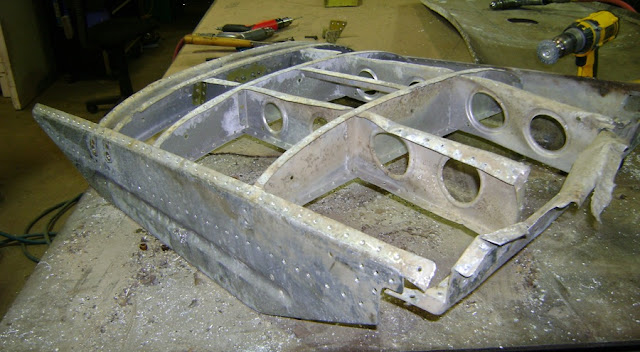 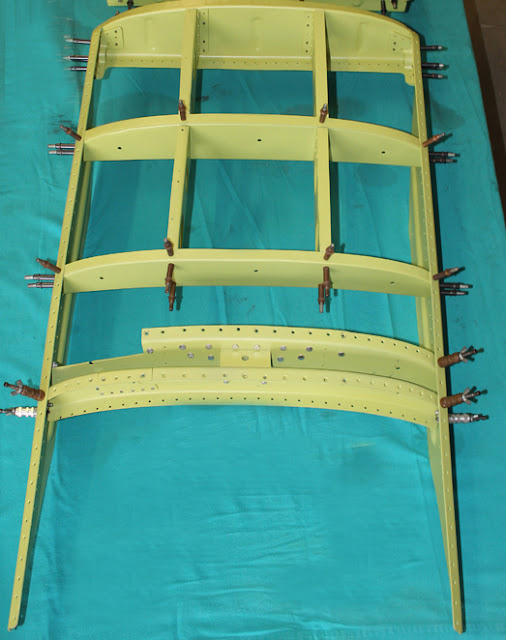 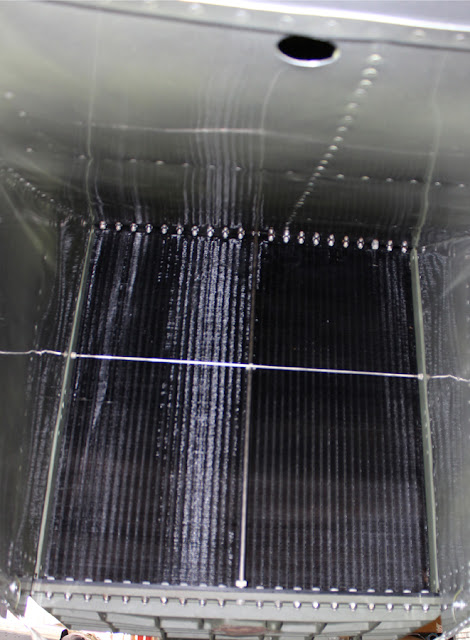 Aft view of the right-hand radiator installed in the tunnel 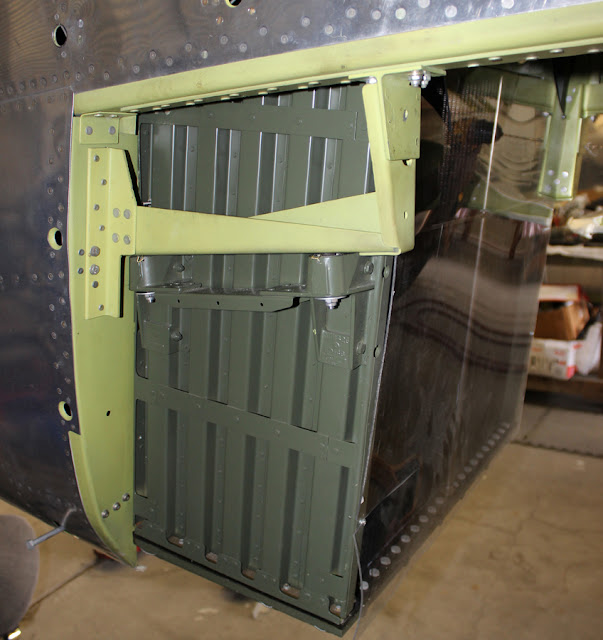 Side view of the right-hand radiator installed. The reflection is from a
temporary piece of protective plexiglass.

Rudders
Both rudders are now completely installed along with the multitude of trim cables and chains. The synchronization of the pilot and co-pilot rudder trims is accomplished by numerous cables and chains that run through the horizontal stabilizer and then attach to each rudder jack screw assembly, one mounted in each vertical stabilizer.

Installation of the right-hand rudder 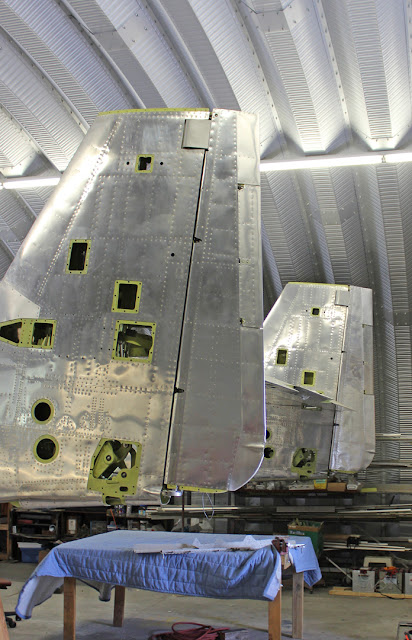 Both rudders are now installed

Merlin Engine Installations
We are getting very close on our engine installation schedule for both engines to come out of their sealed nitrogen-filled containers and see the light of day again.

One of our machine shops is in the process of machining the twelve required Dynafocal vibration-insulating mounts. These mounts are very close to but not the exact dimensions as the P-51 Mustang series.

We have found a company that makes aircraft mounts that has agreed to pour (actually force feed the molten rubber) into the newly machined  Dynafocals mounted in mold housings. 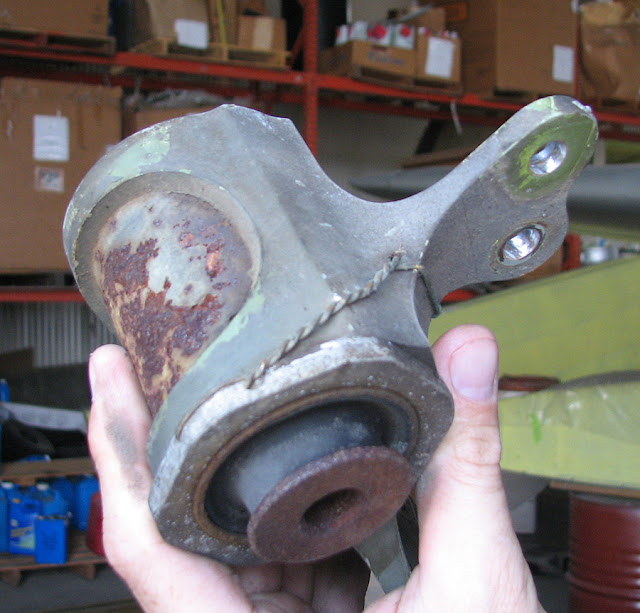 When these twelve Dynafocals are completed, both engines will be installed in their associated mounts.


Note:
Our XP-82 Twin Mustang, #44-83887, was the first XP-82 to fly.  On the very first test flight, the counter-rotating left-hand turning engine was mounted on the left-hand fuselage, and the right-hand turning engine was mounted on the right-hand fuselage.  This arrangement created an upward sweep of the propellers’ wash over the center section, creating an aerodynamic stall (loss of lift). The aircraft would hardly fly due to the loss of lift over the center section. It is a well known fact, including countless photos published by North American, that there was only one flight, our aircraft #44-83887, with the props upsweeping. Before any second flight, the engineers at North American decided to swap the firewall forwards (engines and props) to create a down sweep that cured the center section stall situation. All of the remaining 271 Twin Mustangs built, including our XP-82, had their engines installed with the right-hand turner on the left-hand fuselage and counter-rotating left-hand turner on the right-hand fuselage. 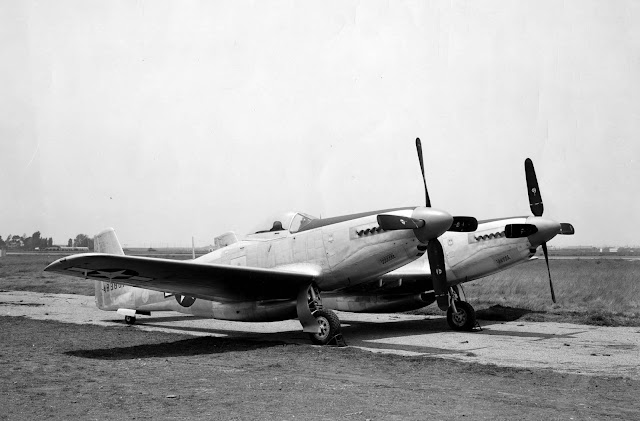 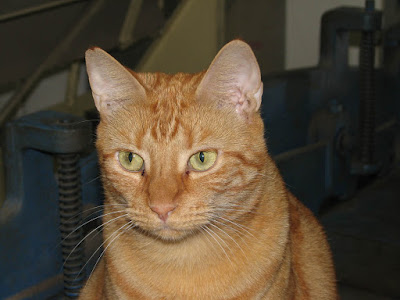 Still have not heard from Rivet.
We all miss her, especially me, Allison.

The XP-82 crew wishes everyone a
Safe and Happy 4th of July!

Posted by XP-82 Twin Mustang Restoration Project at 7:31 AM