Fuel Cells and Liners
We finally have completed the fuel cell test fittings. Quite a bit of time was spent positioning all the fuel scuppers (overboard fuel drains), fuel necks, fuel caps, and liquidometers in the openings on the outboard wings and center section. All of the fuel vent lines were completed by the end of July and we had to temporarily install the fuel tanks, and liners in each of the six positions to confirm that the tanks lined up exactly with each fuel filler, feed and vent line. 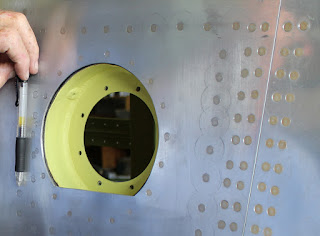 One of the more complicated fuel vent jobs was the manufacture of the inverted fuel vent plenum with the back-flow check ball assembly. We copied the original corroded one as exactly as possible.

All the final fuel bladder installations should be completed by the end of October. We must have put in about three months of solid work to get all of the fuel system fitting perfectly. 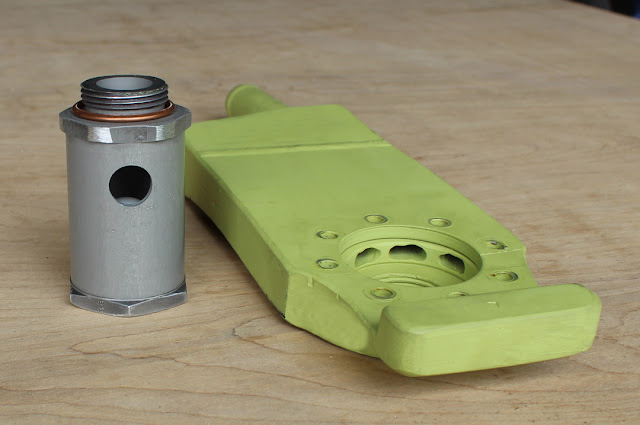 Outboard Flaps
Both outboard flaps will be completed at the end of next week.  They were a relatively simple build with no hidden “gotchas.” The original top skins on the outboard flaps were .025 aluminum. When the NACA test pilots walked off the trailing edge of the wing, their footprints dented the upper skins (even though it says “NO STEP”). We chose to increase the thickness of the upper skin to .040 to cure this footprint denting problem in case any future  pilot exited the aircraft off the back of the outboard wing. 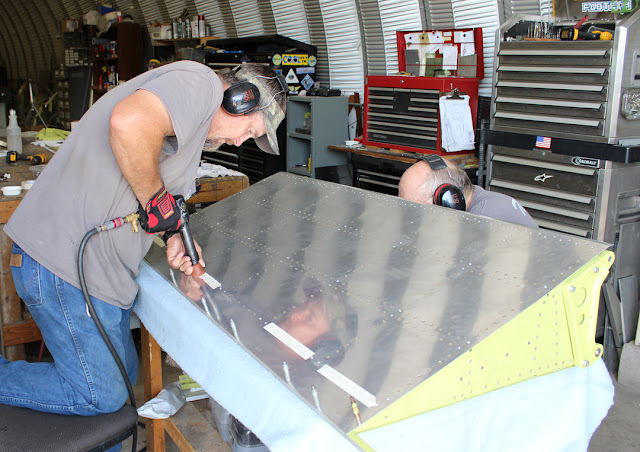 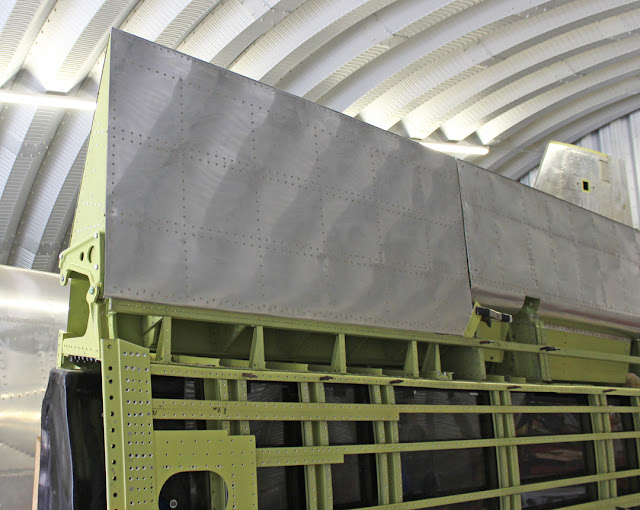 Outboard Wings
Now that the outboard flaps and the fuel cells have been final fit, the completion of the lower wing skinning can commence. The lower skins on the wings were intentionally left off to gain access for the final fuel tank alignment and fitting. The lower skinning of both outboard wings should be completed by the end of September.

Electrical
The final hookups of all of the primary and secondary electrical wiring will start on 1 September.

Most all of the fuselage wiring has been final terminated to all of the terminal strips located on the shelves forward of the instrument panel(s). All of the numbered and labeled wiring harnesses from the center section, wheel wells and outboard wings have been pulled to the shelf locations, awaiting to be hooked up to the terminal strips.

We expect to have the majority of the electrical system(s) completed within a month. 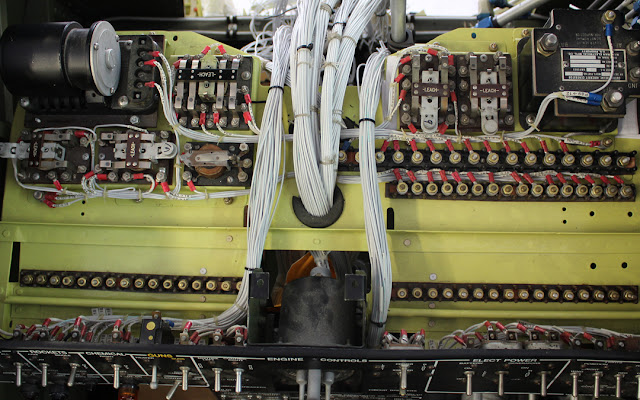 Engines/Props
All twelve Merlin engine-mounting Dynafocals and attaching horseshoes and plates have been completed and delivered. These have been one of the more difficult machining tasks to complete. It would have been simple if we could have just bought twelve P-51 mounts, but they were slightly different in outside dimension and lengths. 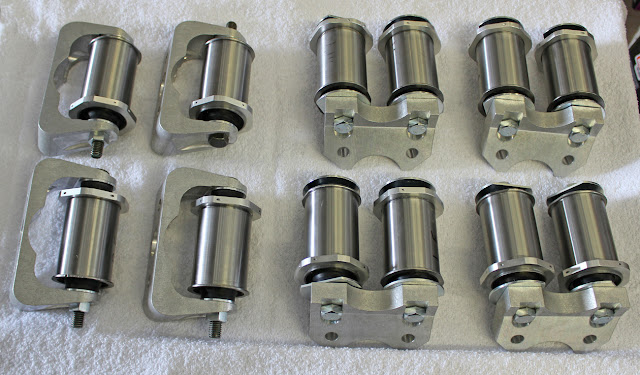 Four horseshoe mounts on the left.
Mounting plates on the right.
(assembled with temporary hardware)

On 1 October the two Merlins will come out of their nitrogen-filled cans and be permanently installed on each mount.

Both disassembled propellers will be trailered to Germany’s  MT Propeller stateside facility located in DeLand, FL. They will assemble both props and call us when they are both completed to return back to us. 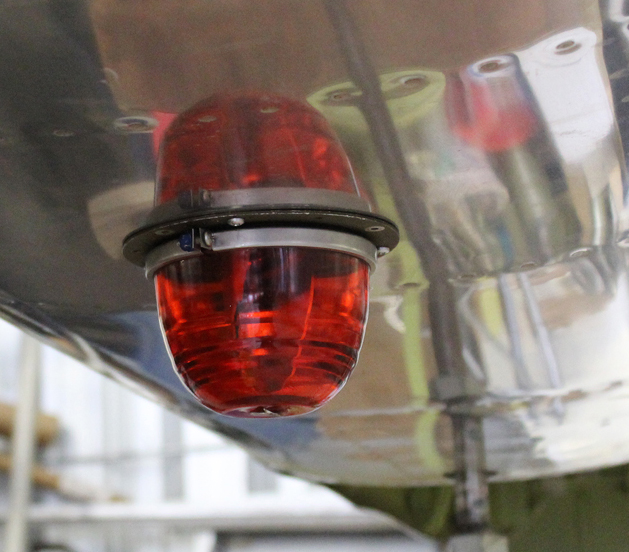 One of the two mounted rotating beacons that Larry Kelley, B-25 "Panchito",
contributed to our project. 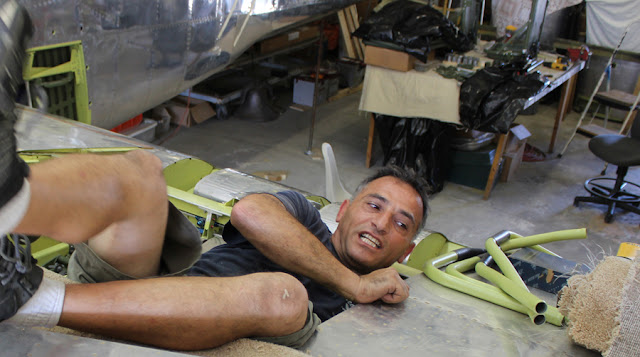 Installing scupper drain lines in the center section fuel bays
(When hired on, did he know he was signing up for THIS?) 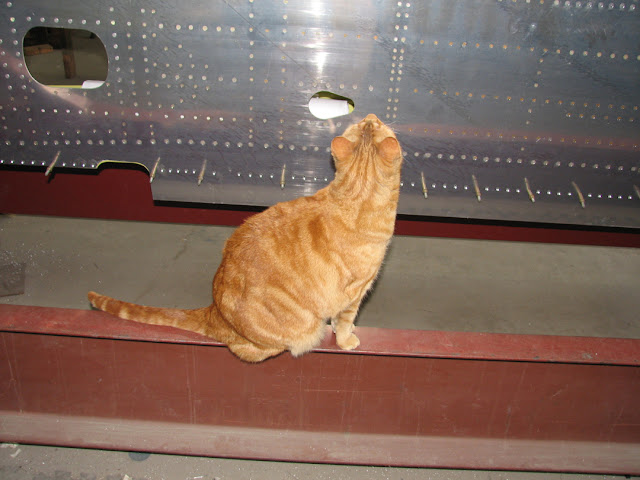 Thanks.
Tom
Posted by XP-82 Twin Mustang Restoration Project at 7:08 AM